November 7 2013
135
When the attacking side does not seek to develop its success, the enemy can heal wounds, consider further steps and go to the counter to achieve victory in the battle. Today, we all seem to witness a situation in which the accusatory "regiments" in the Oboronservis case gradually lose the initiative, on the basis of which the attacked (persons involved in a large corruption case) intercept and initiate a counter-attack.

Sat-sitting in her 13-room “dungeon” in Molochny Lane, Yevgenia Vasilyeva, waited, waited, when these, excuse me, snot with accusations and court decisions would reach the final stage, and, seeing that the law enforcement authorities did not finish the soap opera decide, thought about the response. As one commentator's saying goes: “You don’t score - they kill you!” Following this saying, Evgenia Vasilyeva and her lawyer decided to strike back at the accusers, and through the media, in order to achieve maximum effect. In addition, the blow was also double - in the form of two open letters, one of which was published on the Internet site of the Ekho Moskvy radio station, and the second (already from the words of a lawyer) was suggested through the RAPSI news agency.

So that readers have the opportunity to form their own opinion about what is contained in the first letter - the letter that Evgeny Vasilyev herself composed, we offer it in this material completely (from the site of the radio station Ekho Moskvy), which is called, without cuts. Who is this letter for? The answer to this is its name:

There can be no talk of my admission of guilt in this case. Since there is no fault. Moreover, no one of the so-called members of an organized criminal group, which is listed in the criminal case concerning property, has any guilt. Moreover there is no organizational group. And the most interesting is no damage to the Russian Federation. All transactions were made in the manner prescribed by law and are not recognized as void on any of the grounds. And this means only one thing that there can be no talk of any criminal case.

You ask who cares why? This is the question that arises when you recall the pictures I stole from the Ministry of Defense, a manicure that is paid from the treasury of the Russian Federation, foreign accounts that supposedly exist, an infinite number of lies and absurdities that littered the media.

I find it difficult to judge the reasons. But I am sure of one thing: this is evidence of the weakness and failure of the prosecution. Otherwise, why put pressure on witnesses, the accused and arrange a PR about my nails, hairstyles, overgrown appearance, the inconsistency of my work, looted real estate objects that I own. As for the latter, I declare with full knowledge that all transactions for their purchase took place prior to my work in the DIO of the Ministry of Defense of the Russian Federation. All relevant documents in this regard are available.

As for the last argument regarding the pressure on the accused and the witnesses, I can only say one thing: they need me to discredit the honor and dignity of Serdyukov.

I can responsibly declare that I have been repeatedly blackmailed by the prison in this regard. As a result, they confined themselves to house arrest, trying in every way to frighten me with a change of measure. Now the threats addressed to me have ceased, but the most serious violations of criminal procedural legislation have begun, which my lawyers will describe in more detail.

I did not meet briefly about the accusation, of a more illiterate document in my life. After graduating from St. Petersburg with a red diploma and having read this work on three hundred sheets, I initially thought it was a joke.

After all, it is written about how a certain omnipotent ruler oksmuril hundreds of unsuspecting people with the goal of earning three billion, and the members of the organized criminal group entered the criminal group with a mercenary goal to get a salary for the work they had done, fully fulfilling their duties in the service. At the same time, three billion have disappeared in an unknown direction, and hundreds of unsuspecting people, including appraisers, are still confident that they did not do anything illegal.

We are preparing for a trial and are confident of our victory, and I can authoritatively state that no circumstances will make me discredit and defame the former Minister of Defense of the Russian Federation and my former colleagues.

This cry of the soul was published at the very end of last week. We will not discuss the grammatical and punctuation forms of the letter from the owner of the red diploma of St. Petersburg State University, because the prisoner is writing after all ... But it’s worth discussing the essence of the epistolary message to the public.

So, what does the former head of the Department of Property Relations of the Ministry of Defense, accused of four articles of the Criminal Code of the Russian Federation Yevgeny Vasilyeva, speak about? The main message is that the property department acted solely in the interests of the state, did everything right, and therefore there can be no talk of any criminal case regarding the defendants. Everything is crystal clear, all documents are in order, all signatures are in the right places ... Moreover, Ms. Vasilieva acquired all her apartments and land before she got into the Ministry of Defense DIO, and expensive paintings and diamonds with pearls are generally lies and provocation. The key phrase: "I initially thought it was a joke."


No, well, what can I say ... If the investigating authorities continue to pull the cat by the tail, then in the end it may even turn out that Evgeniy Nikolaevna, along with other employees of the property relations department and Oboronservice, slandered "for nothing," and all mass media in which “slanderous notes” were published will have to throw off and compensate the defendants for moral damage and material costs for lawyers ... In the present circumstances, such a scenario can not be ruled out.

To enhance the offensive effect, lawyer Vasilyeva publishes and continues the material. This material speaks of the need to release his client from house arrest. The reason is to follow the article 109 p.6 Code of Criminal Procedure of the Russian Federation. If the materials of the completed investigation are presented to the accused and his lawyer later than thirty days before the expiration of the maximum period of detention, then the accused must be released immediately. In the situation with Vasilyeva, such an exemption may occur already on November 23. Literally, about to ...
At the same time, representatives of the investigation declare that Vasilyeva does not want to get acquainted with the materials of the case in full, actually delaying the process, for which one can “shrap up” another article of the Criminal Code. Vasilyeva’s lawyer, Mr. Borokov, argues that this investigation itself does not provide him and his client with the opportunity to get acquainted with the final materials of the investigation, violating his rights.

We were there today, they were again unable to show us, allegedly physically they do not have their (materials). This is a gross violation of the rights of Vasilyeva.

The investigation believes that if it provided me with the first volume, then this is the presentation of the case file.

It can be seen that the advocacy work is obvious, that the counterattack has been launched on all fronts, and that now the investigation itself may be in a losing situation. Well, it's like a joke, when two personal supercars of ministers of various departments collided on the road, and a traffic police squad who arrived at the accident site was found guilty of an accident ...

Meanwhile, the case acquires a special piquancy not only in connection with the publication of letters to Evgenia Vasilyeva. More recently, it became known that Valery Puzikov (Anatoly Serdyukov’s sister’s husband) decided to transfer the infamous Zhitnoye recreation center, along with other property, to an autonomous institution of the Ministry of Defense. Now, as it turned out, military artists from the Grekov studio, as well as museum staff of armored weapons and equipment, can relax on the base. Other property of Zhitnoye LLC is also being transferred to autonomous organizations of the Ministry of Defense, and the same Puzikov believes that now there can be no complaints about it, since the total value of the “returned” objects is more than one and a half hundred million rubles. Like, he was wrong, but he compensated everything - what claims could be to me and Anatoly Eduardovich ...

If everything goes on like this, then we can expect that no one of the defendants will have any complaints. Everyone will gather and write personal or collective letters to the public, so that the public knows: there is no guilt, there is no damage ... A picture appears in front of my eyes: “The figures of the Oboronservis case write a letter to the press and the Russian public” ... 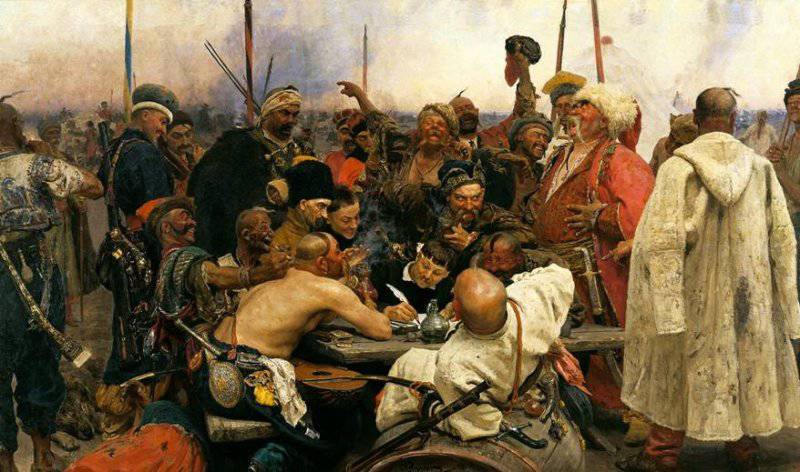 The masters of collages have space for the flight of thought (the best collage option is posted with indication of authorship).

In preparing the article, materials were used from Ekho Moskvy, RAPSI, Kommersant, as well as the canvas image by I. Repin Zaporozhtsy

Ctrl Enter
Noticed oshЫbku Highlight text and press. Ctrl + Enter
We are
Donbass heals woundsResults of the week. “Survived. We can say it was found in the dustbin, washed, cleared of cleanings - and he draws figs to us! ”
135 comments
Information
Dear reader, to leave comments on the publication, you must to register.