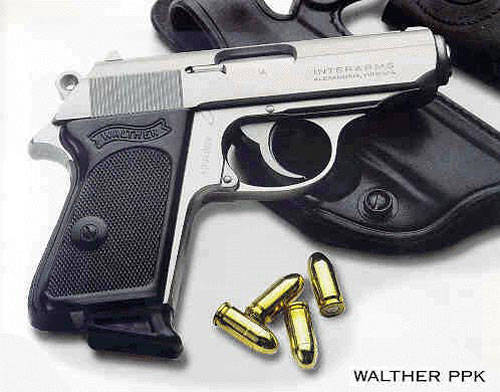 Pistol Walther PP (Polizei Pistole), a police gun company Carl Walther Waffenfabrik, it is considered one of the best examples of the German short-barreled weapons. Walther PP despite its summer 80 history and today is a role model and is in service with the army special rear and police units in many countries.

Walther PP began to be produced in 1929 year, but the history of the emergence and creation of these weapons began much earlier. The main distinctive features of Walther PP are its principle of operation - with automatic based on the free movement of the bolt and trigger (trigger and trigger mechanism) of double action, which allows to bring the gun into a combat state with one hand.

Weapons experts believe that the inventor and developer of this type of weapon is the brilliant Czech gunsmith Alois Tomishku. It was he who developed and subsequently patented a pistol with a self-cocking trigger and several original solutions in the field of pistol automation. He sold his patents to the Vienna Arms Factory in 1919, based on these developments, the factory produced the original Little Tom pistol, which became the world's first serial automatic pistol with double-action USM. 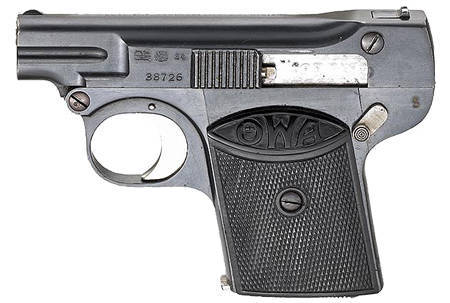 In 1924, the gun Little Tom caught the attention of Fritz Walter, the then head of Carl Walther GmbH. Little Tom was refined by German designers: the removable magazine in the handle was equipped with a push-button latch, and the return spring under the barrel was replaced with a spring around the barrel. This gun and became the progenitor of the famous Walther PP.

After the defeat in the First World War and the signing of the Treaty of Versailles, a ban was imposed on the production of military pistols of a caliber larger than 8 mm and a barrel longer than 98 mm. But the German command, not wanting to lag behind other states, decided to circumvent the ban. At the request of the Reichswehr, a number of German arms firms, including Carl Walther Waffenfabrik GmbH, began to develop a pistol that, within the limits of the established restrictions, would have tactical and technical characteristics as close as possible to the military pistols of other states.

In 1929, on the basis of the Walther 6.35-mm pistol, the 8 model by the engineers of Walther developed one of the most successful designs, which caused a real revolution in the weapon world. The Walther PP (Polizei Ristole) 7.65-mm pistol was designed for the Browning 7,65-mm pistol cartridge and met all the limitations of the Versailles Treaty, while its characteristics were very close to military models.

The main advantages of Walther RR included: self-cocking trigger mechanism, which allowed to make the first shot without cocking the gun, and also an indicator of the presence of a cartridge in the chamber, which later became the signature distinction of all Walther pistols.

Automatic weapons worked on the principle of use of recoil free shutter with a fixed barrel. Systems with a free gate are most often found in the designs of pistols for service and civil pistols. They use a heavy inertial body as a gate, pressed against the breech with a spring. During the shot, the powder gases press down on the bottom of the liner, which plays the role of the engine piston, and through it on the inertia gate, fixed in the barrel casing. The shutter receives the reserve of kinetic energy necessary for the operation of the weapon's automation. USM pistol - type of gun. The fuse - flag type, mounted on the housing-gate, when turned on, blocked the drummer and pulled the trigger. Magazine capacity - 8 cartridges. 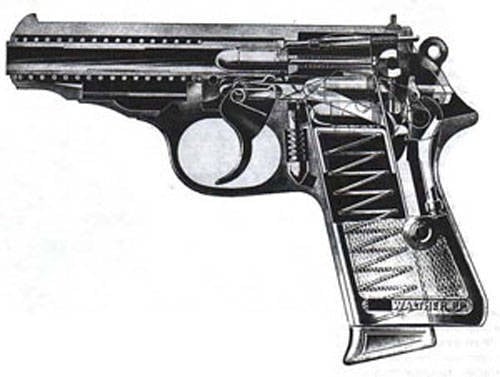 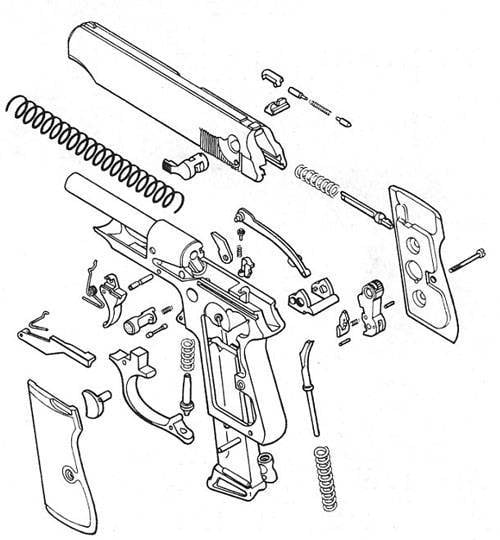 In 1931, the compact model of the successful Walther PPK pistol (Walther Polizei Pistole Kriminal), a small copy of the Walther PP for hidden wearing, was released. In addition to small sizes, the Walther PPK was cheaper to manufacture, ergonomic, featured with improved processability and easier to disassemble and assemble. The new design of the handle contributed to improving the accuracy of shooting, even with a shorter barrel. Walther PPK, despite its enormous cost (the usual barrel cost three times as much as another legend of the “Parabellum”) was much more popular than its older brother Walther PP.

Walther PP (PPK) in pre-war Germany was very popular. Officials of almost all German ministries had such pistols, distinguished only by the stigma on the handle. Walther RR with a holster issued, as part of the uniforms of the Nazi Party and the fighting units of the Hitler Youth. Even the workers of the German imperial radio flaunted Wallers with service sheets.

This pistol was also popular with the representatives of the highest political and military elite of the Wehrmacht. It was fashionable for party comrades to give VIP versions of Walther PP with heroic slogans, original patterns and ornaments. 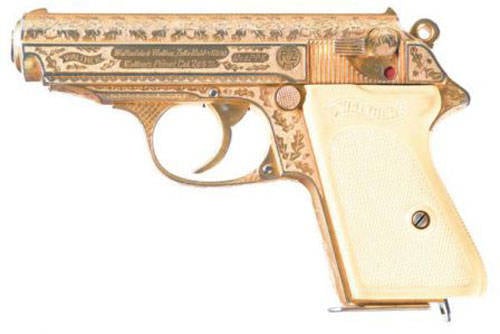 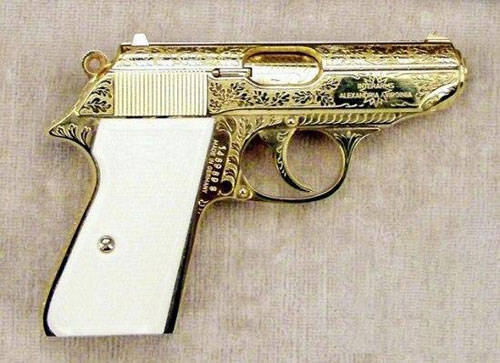 Since the beginning of the Second World War, the quality of the manufactured pistols fell slightly, but nevertheless, until the end of the war, Walther RR remained a reliable weapon. By the middle of the war, production of the RR and RRB was practically halted by orders for an army officer's pistol Walther P38, and after the war the RR fell under the ban of production, as, by the way, other military weapons. 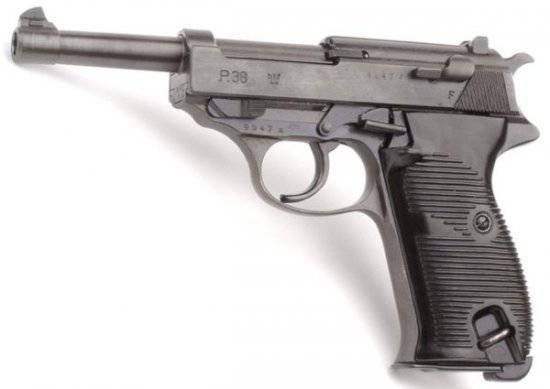 In 1947, in the GDR, the production of Walter police was resumed, made from pre-war parts stocks. Further, the production of Walter clones began worldwide: in France, the firm Manurin produced pistols for 22 LR (PP) cartridges 7,65 mm (RRK) and 9х17 mm kurz (PP and RRK)] under license, in Italy (Bernardelli model 80 ”), Argentina (model“ Bursa 95 ”), in Turkey and South Korea (model DH380“ Daewoo ”). In addition to these pistols, pneumatic and gas versions of pistols began to be produced.

Carl Walther Sportwaffen GmbH also did not stand aside; in 1968, this weapon company produced a pistol of the RRK / S model. This gun was the latest development of a series of Walther PP pistols. The most modern materials at that time were used for its production, which allowed the pistol to be lightened by almost a quarter.

The successful model of the pistol served as a role model throughout the world. For example, the legendary PM even looks very similar to Walter. For which he was nicknamed in the west "Russian Walter." 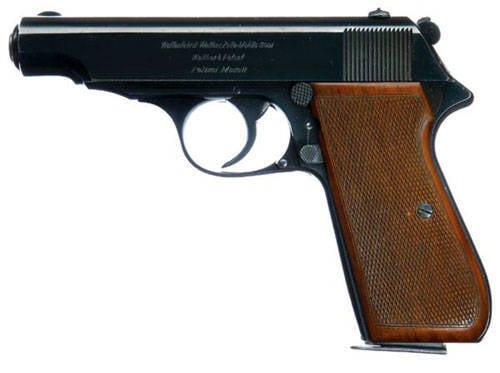 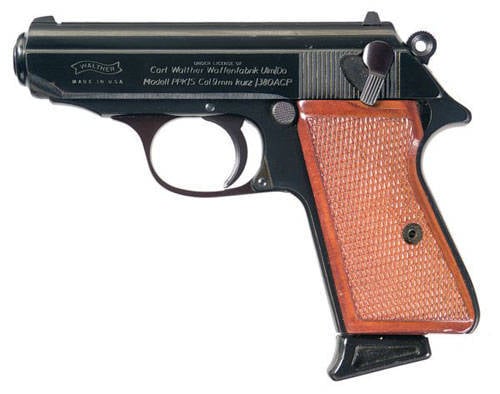 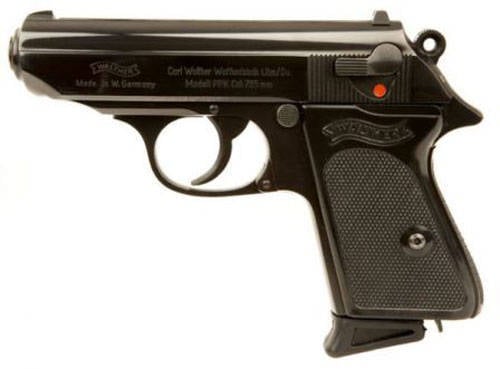 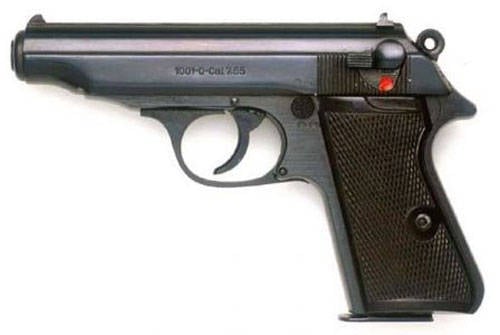 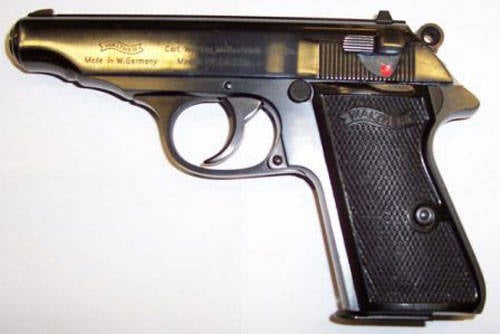 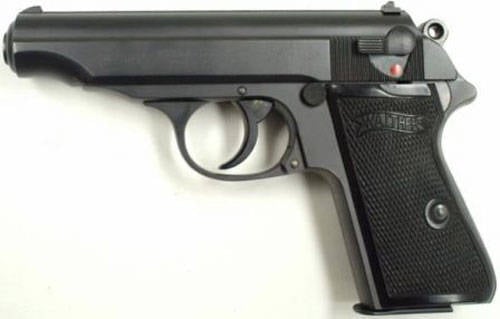 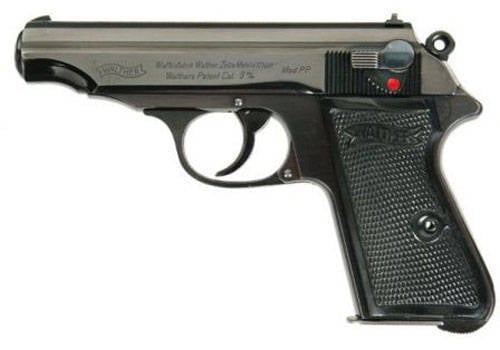 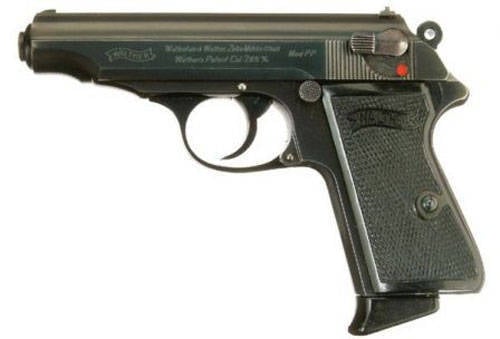 By the way, a series of film romans about Agent 007 James Bond brought Walter PP a new wave of popularity all over the world. It was Walther RR that was the main weapon of Her Majesty’s first to eighteenth episodes. But the Walther RR film career did not stop at this; it was also seen in many other militants, such as “Die Hard”, “Indiana Jones and the Last Crusade”,
"Lethal Weapon", etc. 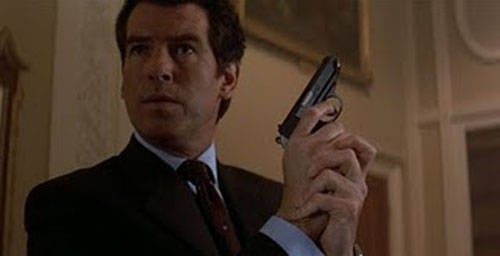 Carl Walther Sportwaffen GmbH manufactures PPK, PPK / S and PPK / E models for the American and European markets. In the “European” modification, the shop is fixed by a spring in the lower part, in the “American” shop retainer is located in the trigger area.

9x17 mm “kurz” cartridges (9 mm Browning Kurz), under which most Walther PP clones are made, are produced in almost every country that produces ammunition in general.

Even nowadays, Walther РРК is popular with special services of the whole world as a second, spare weapon.