If Europe comes out of obedience: towards the future of EU-US relations 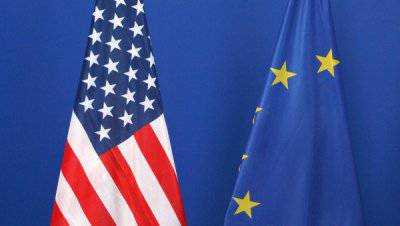 Despite the apologies of Barack Obama, the scandal associated with the total tapping of European countries by the US National Security Agency, only flared up. How will the relations of the transatlantic allies develop and are Europeans ready to live under the all-seeing eye of the American “big brother”?


Obama as an unfaithful husband

Never before since World War II did Germany raise its voice in the dialogue with the United States. The British DailyTelegraph has called the reaction of German Chancellor Angela Merkel to wiretapping her telephone conversations by the US National Security Agency “the most significant protest of the first person of the state” since the beginning of the revelations by former NSA officer Edward Snowden.

Merkel said that Berlin "has lost confidence in the transatlantic allies and that the US explanations alone are not enough." And the German federal prosecutor noted that he was ready to come to Russia and hear Snowden as a witness. Most observers are concerned about the question: was the interception of the top officials of the allied countries - Germany, France, Spain, Italy, Sweden - by the initiative of the NSA itself, or was tacitly sanctioned by President Obama, who was informed about the activities of the special services and did not give a “stop”. In the first case, he is responsible for failing to look through, for negligence, in the second - for creating a system of total surveillance. According to The Wall Street Journal, the interception continued until Snowden escaped. It turns out that, back in June, in front of the Brandenburg Gate, Obama kissed Frau Merkel on the cheek, and in half an hour he read the transcript of her conversations with Putin or with her husband.

Meanwhile, the American Los Angeles Times, citing intelligence sources, claims that "the White House and the State Department" signed up "under surveillance, during which telephone conversations of friendly foreign leaders were tapped." According to the newspaper, both former and current US intelligence officials "reject allegations that Obama and his assistants had no idea about wiretapping. They are outraged, believing that the president let them down into the muddy stream of scandal in order to distance himself from the revelations of former NSA contractor Edward Snowden. ”

Offended Merkel even called Obama, but he, of course, assured her that he did not know anything about wiretapping. And if he knew, he would immediately give instructions to stop such an outrage. Former head of the FSB Nikolai Kovalev believes that Obama chose not the best way to protect: “He is like a husband caught in bed, who, making excuses to his wife who came at the crucial moment, says: dear, this is not what you thought! This is not the intelligence, this is not the information, it's not at all as it may seem from the outside. Excuses of the president sound ridiculous, because there are documents according to which, even in 2010, Obama allowed the special services to listen to Merkel. ”

"The head of the NSA, Kate Alexander, personally reported to the president about the tapping of the conversations of the German chancellor," writes the newspaper Bild am Sonntag, "and Obama had nothing against it." According to some sources in the NSA, if a foreign leader is tapped, then the US ambassador to the relevant country and the employee of the National Security Council at the White House responsible for this country receive regular reports. The decision whether to continue tapping depends on the Department of State, which must evaluate political risks. The extracted intelligence is transferred to the presidential adviser on counter-terrorism - Lisa Monaco, as well as other unnamed White House staff.

Nikolai Dolgopolov, deputy editor-in-chief of Rossiyskaya Gazeta, winner of the literary prize of the Foreign Intelligence Service, is confident that NSA officials tapped all the world leaders, regardless of whether they are considered friends or enemies of the USA “The National Security Agency has traditionally been listening to leading politicians, including American allies in the North Atlantic Alliance,” the expert notes. - When General de Gaulle left NATO, he fell under the wire. The general grazed no less than the opponents of the Warsaw Pact, each step was tracked. And now they are just spying on President Hollande. ”

The American press calls the current scandal the biggest blow to the image of Obama. The Nobel laureate of the Peace Prize, who is always in the center on memorable photos of world leaders, - turns out to have entangled the vile eavesdropping network of his colleagues from at least 35 countries and was looking for something in their dirty laundry! “President Barack Obama has made few friendships in the club of world leaders,” writes the International Herald Tribune. “Therefore, the damage that intelligence activities have caused to his good relations with Angela Merkel is perhaps the most painful moment for him in all stories with the NSA.

Agency which is not

The NSA is the core of the entire US intelligence community. The agency employs around 38 thousands of employees in American territory and about 100 thousands abroad. The budget is classified, but, according to various estimates, several times the budget of the CIA.

The National Security Agency was created in 1952, when during the war on the Korean Peninsula, the US command was unable to quickly decipher the intercepted information. Every year the influence of the special services grew. It is known that the NSA is behind the global Echelon interception system. According to the report of the European Parliament, Americans are intercepting radio communications, satellite communications, mobile communications, as well as communications transmitted via fiber optic channels through ground tracking stations located around the world.

After 11 September 2001, US President George W. Bush authorized the NSA program, codenamed Stellar Wind, which included tracking e-mail, telephone conversations, financial transactions and Internet traffic. Well, the world learned the latest details about the methods of the NSA thanks to Edward Snowden. It turned out that the agency is collecting all possible electronic information. He is interested not only in terrorists, but also in journalists, businessmen, students, athletes, any foreigners in the United States.

“Under the hood, this organization has everyone who is even of minimal interest,” says Nikolai Dolgopolov. - In 2002, I myself had to face this at the Olympics in Salt Lake City ... And you know who you listened to? Judges in figure skating! And not just the judges. We listened to everyone who discussed figure skating, people who wove fables, talked about bribes, gossiped. Based on this - years later! - Figure skating judges who entered the USA began to interrogate right at the border. And I can say that there was nothing surprising in the wiretapping of the German Chancellor for me. ”

What could interest American intelligence in telephone conversations Merkel? It is unlikely that they hoped to hear something new about gas deals with Russia or to learn about the plans of world domination being hatched by Germany. But some small detail, intimate detail of private life was of great interest, because the threat to give it publicity makes a person manageable. “Any political leader is also a person who always has some secrets,” said formerly a former KGB chief intelligence officer Mikhail Lyubimov, “However,” said “However”. “Maybe Merkel betrayed someone, maybe she has a lover ... Any high-ranking official has her own secrets: a dubious financial transaction that compromises a gift or purchase, tax evasion. And when all this falls into the clutches of the security services, they have a powerful means of pressure, blackmail. ”

Trump in the negotiations

Why was the US so keenly interested in European allies? Does Washington have reason to be afraid of something? Are there any problem points in relations with the Old World? Recall that in 2003, neither Paris nor Berlin supported the US war against Iraq. Then President Bush’s advisor on national security, Condoleezza Rice, uttered the formula: "To punish France, to forget Germany!"

For the time being, Germany was indeed forgotten, and the Germans began to gradually free themselves from the influence of the United States. After World War II, the Americans sealed Germany into NATO to prevent its ambitions from being resurrected. The Washington Doctrine stated: “to keep Russians out of Europe, Americans in Europe, and Germans under the control of Europe.” Now the situation is changing. “In Germany, a new generation of Germans is growing up, which does not consider itself responsible for the horrors of the Second World War,” says Boris Shmelev, head of the Russian Foreign Policy Center at the Institute of Economics, Russian Academy of Sciences. - This new generation is not going to continue to repent for the sins of grandfathers and insists that the Federal Republic of Germany play a large role in world politics and in European affairs. Anti-American sentiment is widespread in the country, and although they can be kept under control for now, they are gaining momentum every day. ” It is not by chance that more and more Germans call the US troops in Germany “occupation”.

There are reasons to closely monitor France, which never missed the chance to frontier. In the US, they do not forget that the most popular French leader, General de Gaulle, led his country out of the military structures of NATO, and the Americans could not do anything about it. True, it is worth noting that the United States now reliably controls the European political class. And a clear evidence of this is the forced landing of the presidential airliner Evo Morales. In this case, as we remember, the European countries obediently took under the visor. “In my opinion, this is an amazing story,” says Nikolay Kovalyov. - The Europeans, in spite of international norms and laws, put the plane of the Bolivian president and almost rushed to get out of Snowden, the man who exposed those who violated their rights, opened the eyes of European elites. They should have been wearing it. ”

What consequences will the current scandal have for Euro-Atlantic relations? Obviously, one should not expect a rebellion of NATO allies, but the protest movement will grow, and this will not affect the position of some EU political parties. Now most of all are outraged in Germany, which, according to the New York Times, "is ready to put an end to special relations with America." However, in reality, practical Germans are unlikely to challenge Washington. Obama found himself in a very uncomfortable position, and it would be a sin not to use it in the recently begun large bargaining about a common economic space. According to Boris Shmelev, “Germany received certain trumps that it will try to use. First of all, it will probably set forth its own conditions in the matter of creating a free economic zone between the USA and Europe. ” Moreover, Washington has less and less tools to push its interests through force. “What we have done has in fact nullified America’s main foreign policy advantage — our soft power,” notes the International Herald Tribune.

Ctrl Enter
Noticed oshЫbku Highlight text and press. Ctrl + Enter
We are
How the US uses surveillance and scandals to spread its global control (AlterNet, USA)The game of "snowballs" across the Atlantic
17 comments
Information
Dear reader, to leave comments on the publication, you must to register.