Caucasian problem and its solution 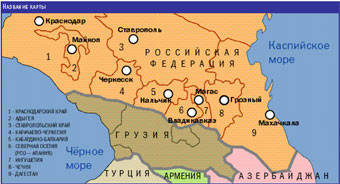 The latest events in the North Caucasus - the killing of tourists, the attack of militants on the capital of Kabardino-Balkaria - the city of Nalchik, only confirm the true state of affairs, the Caucasus is on the verge of an explosion.

The counter-terrorist operation 1999-2000 did not solve the problem, part of the bandit forces, the so-called. "Irreconcilable", most of the bandits received an amnesty and formed the local Ministry of Internal Affairs, the battalions "North" and "South" (Ramzan Kadyrov's personal guard), became officials. Thus, the gangsters and the entire Chechen people (with a few exceptions - there were also Chechens who acted in the interests of the whole of Russia) were not responsible for the mass genocide, robbery and expulsion of Russians from the territory of Chechnya.

Pumping the North Caucasus region with money finally formed the parasitic ethnic power structures of the republics of the Caucasus. The problems of mass unemployment, job creation, the highest level of criminality in society are not solved. Criminal groups from the South and North Caucasus spread throughout Russia, creating hotbeds of national tension.

Moscow and local ethnic authorities are collaborating to suppress the Islamic underground. But there will be only more Islamists, Islam has a program of striving for a fair world order. People who are not afraid to die for the sake of their convictions, cause only respect. Many have already noticed that surrounded by radical Islamists are fighting to the last, they do not surrender. They behave like Russian soldiers in their best qualities. This problem can not be solved only by force.

The resettlement plans for the unemployed from the North Caucasus, voiced by Moscow and Khloponin, only further strengthen the radical-nationalist position, will lead to further strengthening of ethno-criminal gangster groups.

What should be done to solve the Caucasian problem

- You can not separate the North Caucasus, as part of the proposed Russian nationalists and liberal figures. This will be the failure of the centenary efforts of the Russian Empire and the Red Empire to strengthen its position in the Caucasus. We will receive a zone of continuous war where rivers of blood will be shed. The Ingush war will begin against the Ossetians, the Ingush will be supported by the Chechens, the Ossetians - by South Ossetia. The invasion of Georgians into the territory of Abkhazia and South Ossetia will begin. It will be possible to create the North Caucasus Federation, which will be headed by Chechnya as a territory, having prepared combat units and a lot weapons. The influence of Turkish, British, American intelligence services will increase. Russia will receive millions of refugees, including Russian, which will exacerbate the social situation and so difficult. The Federation of the Caucasus will be of a parasitic type, since the habits of production life, and so the order is blurry, will be completely lost. Russia will receive a surge of kidnappings, raids on Russian areas, a sharp increase in ethnic mafias in all major cities.

As a result, Russia will have to fight again, but with the entire Caucasus, which will require tremendous exertion and great losses.

- Immediately change all the heads of the North Caucasus regions and the entire leadership of the administration to the Russians, bring the former administration to justice, there are almost no innocent people there. Order in the Caucasus is possible only when the Russians control everything, otherwise cronyism and cronyism.

- Set the state of emergency in the North Caucasus years on 5-10, "clean" the entire territory of the gangster elements.

- The Chechen people, with a few exceptions, should be evicted to a special settlement in sparsely populated areas of Siberia. All those guilty of murder, harassment, and robbery of bandit groups from the end of 80 to 2000, are subjected to a strict regime of imprisonment. In the prison system, to restore the principle - “who does not work, doesn’t eat”, the system of correctional institutions should not only be self-sustainable, but also be profitable for Russia. Resistance must be ruthlessly crushed. The example of the Chechen people will be for all Caucasian peoples a sign of the restoration of normal Russian power and will be understood correctly. To eliminate the Chechen Republic, to create the Grozny Region.

- The national policy should be carried out in the spirit of the Russian Empire, not the USSR: in the village you can live by your own laws (dance folk dances in squares, punish with sticks ... blithe, drunkards, idlers, cut sheep for holidays, etc.) , and the rest should act Russian law.

- Complete elimination of ethno-criminal groups throughout Russia, mercilessly and quickly, within a week. All appearances, addresses, surnames from the Ministry of Internal Affairs and the FSB are.

- There is no “tolerance” for such national “customs” as kidnapping, slave trade, possession of illegal weapons. The operation to free slaves in the Caucasus, the punishment of their "masters".

- Creating a program to restore industry, agriculture, the tourism industry and health zones (for children, old people, war veterans), all ordinary people of the Caucasian regions should be able to work peacefully on their land.

If the central government continues to continue the policy of “multiculturalism”, which has already completely failed in Europe, and not the policy of Russification of Russia (Return of the Russian Superethnos to their Rights and Obligations to be Masters of the Russian Land from the Caucasus Mountains to the Kuril Ridge), then the end and collapse of the Russian Federation is inevitable , along with the death of all former political elite.