November 6 2013
46
A new hypersonic aircraft was introduced, which should be replaced by the fastest reconnaissance aircraft - the legendary SR-71, which developed speed in 3500 km / h.


Lockheed Martin has officially unveiled a new aircraft design, whose tactical and technical characteristics will exceed those of the SR-71 Blackbird. The aircraft with the SR-72 index will reach speeds above 6 thousand km / h and, unlike its predecessor, will fly in unmanned mode and strike targets on the ground. Such an aircraft for modern air defense systems will be virtually invulnerable: the new aircraft will be able to fulfill the task set for it and leave before the moment when the enemy’s air defense manages to take action. 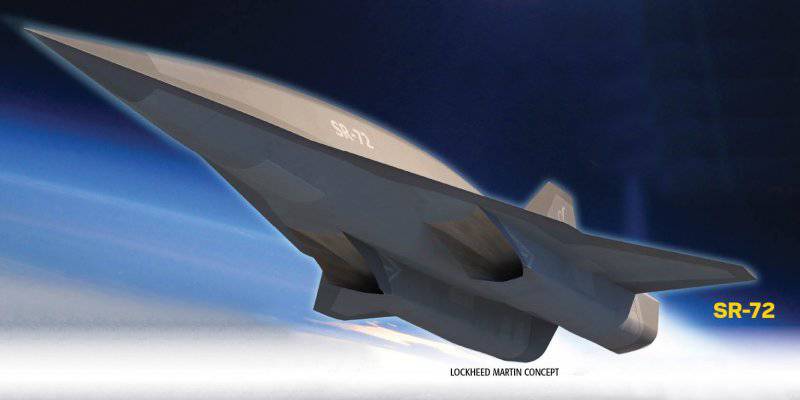 The SR-71 Blackbird was able to rise to an altitude of 26 in thousands of meters - almost 3 times the capacity of civilian airliners. Most likely, the new SR-72 aircraft will be able to rise even higher, which will significantly complicate or negate the possibility of interception by enemy fighters.

The new spy plane will be able to maintain cruising speed M = 6. SR-72 will be the first hypersonic aircraft adopted. In addition, it will be the fastest on the planet, only experimental X-15 rocket planes could maintain such speed.

Rumors about the hypersonic scout SR-72 go for a long time. The new aircraft was discussed as part of the plan of the American air force for the use of hypersonic aircraft for the projection of force on the planet. The SR-72 should fill the gap between satellites and unmanned aerial vehicles, which can stay in the air for a very long time, but cannot evade air defense systems and quickly reach the target. Due to the high precision weapons SR-72 will also be able to deliver lightning strikes (for 1-2 hours) on particularly important targets. The high speed will allow the new aircraft to cross the Atlantic in 1-1,5 hours, and to reach the goal in the central part of Russia, starting from an airfield in the central part of the United States, in 2 hours.

The main feature of the new hypersonic scout will be the engines that are developed in conjunction with the company Aerojet Rocketdyne. For a subsonic-speed flight, a hypersonic ramjet engine is equipped with a turbine. 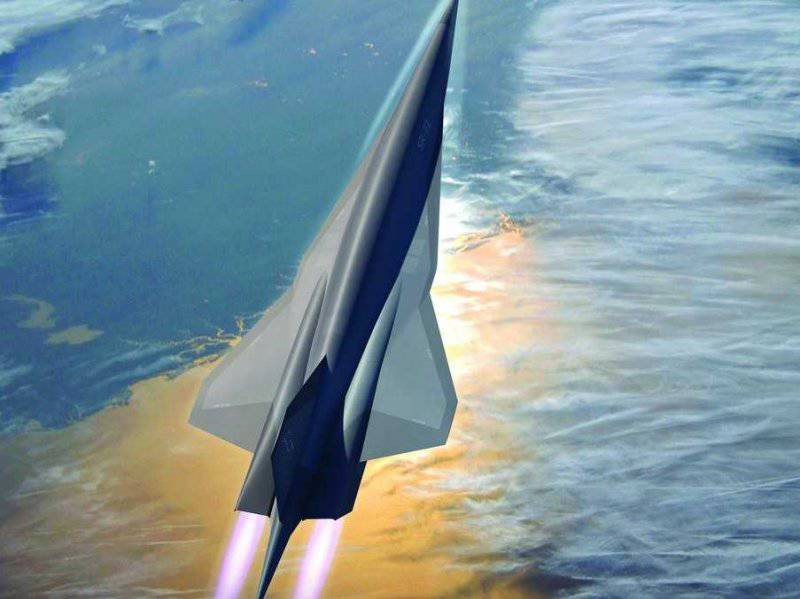 At speeds above M = 2, conventional turbojet engines begin to have problems with control. On the SR-71 Blackbird, which was developed in the 1960-s, this problem was solved by using a special mobile cone in the air intake. At speeds up to M = 1,6, the cone moved forward, and when this threshold was exceeded, it moved in, after which the engine switched to direct-flow mode. The supersonic air flow on the outer part of the cone was compressed, as a result of which the flow velocity fell, but its pressure and temperature increased. After that, the air was divided into two streams: one was directed to the 4-speed compressor, the second was burned in the afterburner. This made it possible for the SR-71 to reach speeds greater than M = 3 and to maintain a cruising speed of M = 2,8. It should be noted that malfunctions in the engine management system have plagued the Blackbird throughout stories its operation - 1964-1998 years. In addition, at high speeds, consumption was about 600 kilogram per minute, which is why the flight radius was equal to just 2 thousand km - without refueling less than 1 flight hours.

When creating the SR-72 reconnaissance aircraft, the American aircraft designers will have to solve several complex technical problems that will primarily concern the heating of the hull during hypersonic flight and the power plant. Lockheed Martin experts believe that at the present stage of development of technology and science, this goal is achievable, and the first optional manned flight prototype of the SR-72 will be ready in the 2023 year. The new aircraft will be smaller than the F-22 fighter. By 2030, the SR-72 will enter military service.

The new aircraft, equipped with precision weapons and capable of flying at hypersonic speed, will be virtually invulnerable to modern air defense systems. At one time, Blackbird carried out a large number of reconnaissance flights, including flights over the territories of the war-ridden Middle East and Vietnam, and also invaded the territory of the Soviet Union. Despite such flights, which were deadly for other types of aircraft, the SR-71 flying at a speed of about M = 3 successfully escaped from fighter-interceptors and anti-aircraft missiles. Despite the fact that almost every time Blackbird was detected, they tried to intercept it, during the 34 of the SR-71 use there was not a single combat loss: all 12 disasters were associated with piloting errors or technical malfunctions.

According to the site http://rnd.cnews.ru
Ctrl Enter
Noticed oshЫbku Highlight text and press. Ctrl + Enter
We are
Hypersonic fuss: in pursuit of speedNew generation hypersonic shock systems using guided aerial bombs
46 comments
Information
Dear reader, to leave comments on the publication, you must to register.