November 7 2013
29
One of the main innovations of the exhibition Russian Arms Expo-2013, held in late September, was a promising heavy-duty infantry fighting vehicle “Atom”. This BMP was the result of cooperation between Russian and French specialists. The French companies Renault Trucks Defense and Nexter Systems, the Russian enterprise Uralvagonzavod and the Central Research Institute Burevestnik, using the available experience, created a promising combat vehicle that may be of interest to a large number of potential customers. It should be noted that the Atom project is not the first or only result of Russian-French cooperation in the development of armored combat vehicles. Similar projects began to appear several years ago.

In the middle of the last decade, the French company Panhard and the Russian Instrument Engineering Design Bureau (PCU) demonstrated their new joint development at several international exhibitions of weapons and military equipment. In the course of the joint project, the French and Russian organizations used the existing developments, which made it possible to create a relatively simple combat vehicle capable of effectively fighting the armored vehicles and fortifications of the enemy. 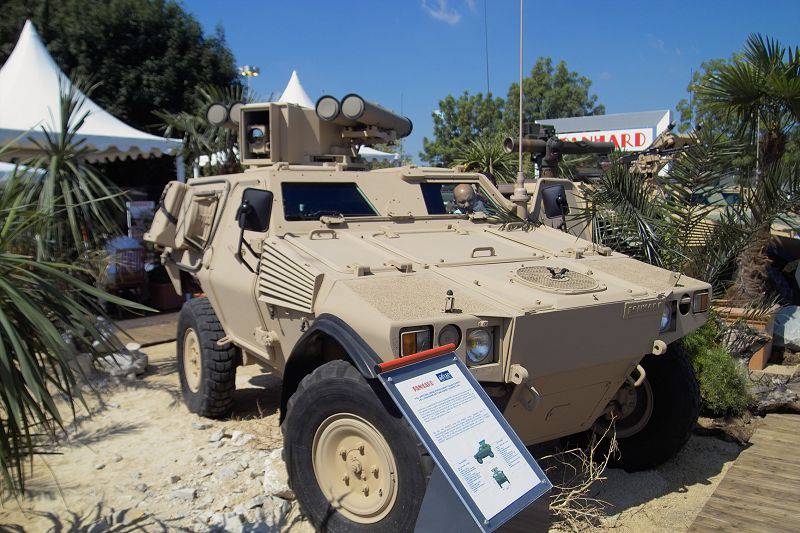 A project called VBL Kornet meant using a French-made VBL armored car as the carrier of the Russian Quartet combat module with anti-tank missiles. The base armored vehicle did not undergo any changes during the installation of the combat module, thanks to which its characteristics remained at the same level. The VBL Kornet fighting vehicle could speed up to 95 km / h and carry up to four people, including the driver. Protection of the body of the base armored car corresponded to the first level of the NATO standard STANAG 4569: the armor plates protected the crew from rifle bullets of caliber 7,62 mm.

The VBL Kornet project implied the installation of a Russian combat module on a French armored car. The combat module "Quartet" is actually a launcher of the anti-tank missile complex "Kornet-E", the design of which is changed to be installed on various types of equipment. A rotary platform is installed on the shoulder strap of the base machine, which serves as the basis for all units of the combat module. On the upper part of the platform, a block of sighting equipment and fastenings for four transport and launch containers with missiles are mounted. The control panel and other devices of the operator’s workplace are mounted to the lower part of the platform. The total weight of the combat module is 600 kg.

The equipment of the “Conret-E” complex, which uses semi-automatic laser beam guidance, ensures the destruction of targets at a distance of up to 5500 meters. When using a thermal channel of sight, the range is reduced to 4500 m. Four transport-launch containers with guided missiles are simultaneously installed on the mountings of the combat module. Additional ammunition can be carried inside the base vehicle. The capabilities of the VBL armored vehicle made it possible to place five containers with missiles inside the hull.

Panhard VBL armored cars are operated in more than a dozen countries, primarily in Africa and South America. These states were considered as the main customers of the anti-tank combat vehicle VBL Kornet. In particular, and for this reason, the promotional materials mentioned the possibility of installing the Quartet combat module on the base machine under the conditions of a military workshop. Domestic and foreign experts highly appreciated the prospects of the new French-Russian combat vehicle. However, after several demonstrations at international exhibitions, armored cars with anti-tank weapons VBL Kornet did not become the subject of contracts. None of the countries considered as a potential buyer showed a desire to purchase Russian-French equipment produced together.

The cooperation of the Tula KBP and the French company Panhard did not bear fruit, but, nevertheless, showed the prospects for international cooperation. At the recent salon of arms and military equipment Interpolitech-2013, the Russian company Asteys and the French Renault Truck Defense revealed their plans. In the near future, these companies intend to begin production of modernized VBL armored vehicles for the needs of Russian security forces. 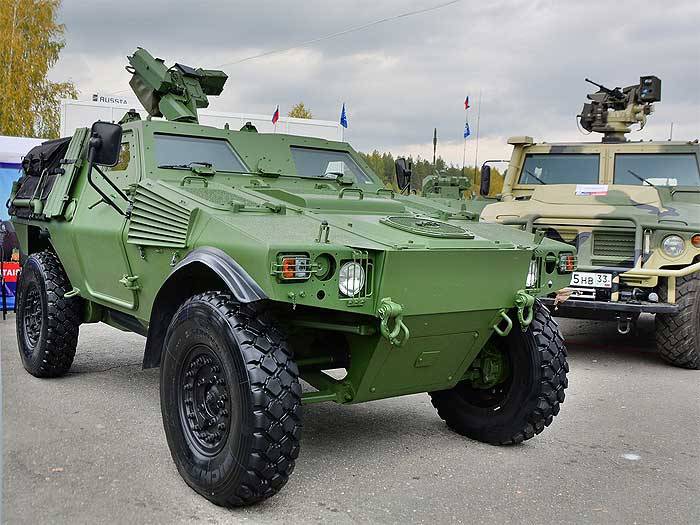 A few years ago, Renault Truck Defense acquired Panhard and is now developing the VBL project. The next step in this direction is the project with the code name ASTAIS-VBL. The initiator of this project was a Russian company, which studied the state of domestic and foreign developments in the field of light combat armored vehicles. According to the results of comparisons of several armored vehicles, the French VBL in an upgraded version was recognized as the most interesting and relevant requirements of the security forces. At the same time, it is planned not only to purchase equipment abroad, but to start assembling new machines at Russian production facilities.

At the Interpolitech-2013 exhibition, representatives of Asteys told about further joint plans. Next year, the companies participating in the project intend to assemble the first batch of ASTAIS-VBL machines at one of the Russian enterprises. The power plant and chassis of the new cars will be delivered from France, and the body, instrumentation, etc. will do in Russia. The assembly of armored cars will also be conducted by Russian specialists. The joint project involves the construction of machines modification VBL Mk 2, which differs from the basic version of a more powerful engine. Turbocharged diesel Steyr M14 horsepower 129 hp will increase the maximum speed of the armored vehicle to 110 km / h, as well as increase the load capacity to 900 kg.

The first batch of ASTAIS-VBL armored vehicles will consist of 5-10 vehicles that will be tested at the test site, and then transferred to the Russian Ministry of the Interior. The units of the Ministry of Internal Affairs must accept the armored vehicles for trial operation and draw appropriate conclusions from its results. If the Russian security officials are satisfied with the equipment of joint Russian-French production, its full-scale mass production will begin.

In the near future, the emergence of new projects, jointly implemented by Russian and French designers. According to available information, now the Tula Instrument Engineering Design Bureau is in talks with Renault Truck Defense. It is proposed to create another combat armored vehicle armed with anti-tank missiles. As a basis for it, it is proposed to use the Renault Sherpa Light Scout armored car, and the Quartet or Quartet-M combat module that uses the Cornet family of anti-tank missiles can be a weapon. For obvious reasons, the exact appearance and future fate of this project has not yet been determined. 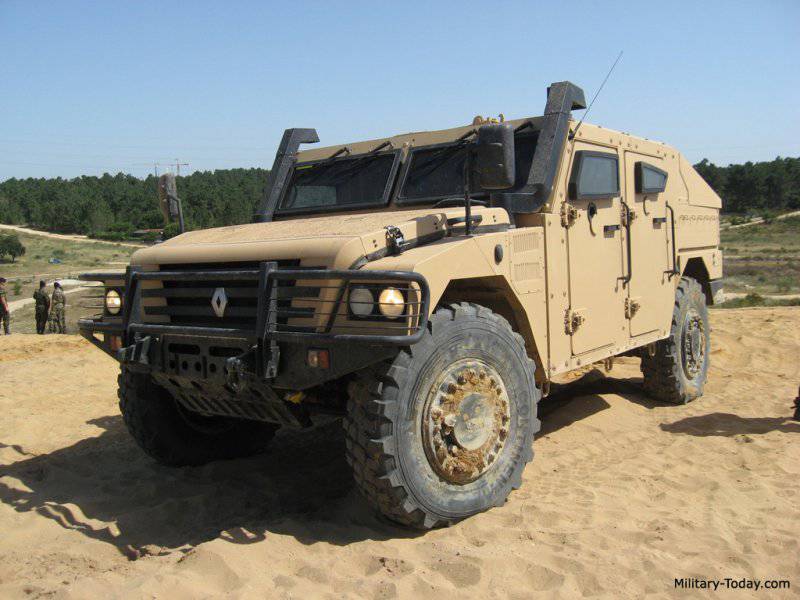 Finally, it is necessary to mention once again the Atom project, the first result of which was demonstrated at the Russian Arms Expo-2013 exhibition. During this project, it is planned to create a wheeled armored platform suitable for use as the basis for combat vehicles of various classes. Thus, in the promotional materials presented at the exhibition, it was argued that the Atom armored platform could become a base for heavy-duty infantry fighting vehicles with 57-mm automatic cannon, self-propelled artillery 120 mm anti-aircraft gun, ambulance and other military equipment.

Unfortunately, to date, not a single Russian-French project of armored combat vehicles has become the subject of orders and has not reached the stage of mass production. In the foreseeable future, new types of equipment will be offered to Russian and foreign customers and it is quite possible that they will interest potential buyers.

Ctrl Enter
Noticed oshЫbku Highlight text and press. Ctrl + Enter
We are
Russia and France are creating a joint project of an armored carLight armored reconnaissance vehicle VBL (Véhicule Blindé Léger)
29 comments
Information
Dear reader, to leave comments on the publication, you must to register.