The program UCLASS (Unmanned Carrier-Launched Surveillance and Strike) provides for the creation of a high-tech reconnaissance-strike unmanned aerial system (BAS) of carrier-based aircraft. According to the initial plan, it was supposed to provide the commanders of aircraft carrier groups and formations with the opportunity to receive comprehensive intelligence information around the clock, while at the same time enabling the launch of an air strike on the most priority (dangerous) targets.

In the interests of the state

In the presentation “The program for creating a demonstrator of an unmanned combat aviation system: a new era of naval aviation?”, Prepared several years ago by Robert Wark, senior vice-president for strategic studies of the Center for Strategic and Budgetary Evaluations, and senior scientist of the center Thomas Erhard, emphasized: the interests of our state to preserve and even expand the combat capabilities of aircraft carriers to influence the environment. The inclusion of a combat unmanned aircraft system into the composition of ship wings will allow the aircraft carrier to be transferred from a shock system with global mobility, but too small a radius of reach, to a full-fledged global long-range reconnaissance and shock system that is resistant to the numerous challenges of the 21st century. ” 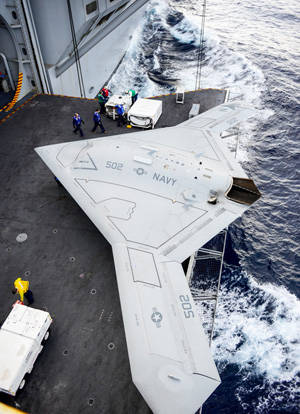 In turn, the request for the provision of information on the UCLASS program from 19 March 2010 indicated: “The deputy head of naval operations (that is, the commander of the Navy in Russian terminology) indicated the need for an aircraft carrier-based system that should handle reconnaissance missions, observation and reconnaissance, as well as perform shock tasks, which will increase the versatility of aircraft carriers to solve combat missions. Over the next ten years, the Navy intends to focus its efforts on identifying the necessary needs, as well as on developing an unmanned aircraft system that can provide this versatility. In this regard, the Navy is interested in information on the possibility of creating an unobtrusive unmanned aircraft carrier-based system optimized for operations in irregular and mixed combat scenarios, provided that by the end of 2018, its limited use in such scenarios together with manned aircraft wing systems aircraft carrier. This unmanned aircraft system should increase the level of information provision and reduce the time for searching, detecting, tracking, issuing target designation data and destroying priority targets. This request for information is intended to determine the presence of developers who are able to provide a limited number of such systems that can be serviced by naval forces and will be able to solve the above problems. ”

The participants in the tender for the UCLASS program included companies: