The concept of Prompt Global Strike (PGS), developed by the US Department of Defense, is a serious concern of the Russian military and political leadership. According to the concept of mines and mobile ground complexes of some states are subject to destruction by non-nuclear hypersonic missiles and aircraft. Although official Washington denies that Russia is among the targets, the reality of the threat of being subjected to a missile blitzkrieg must be analyzed.

In their reports on the Non-Nuclear Rapid Global Impact (NBGU), the Pentagon leadership, the Strategic Command (SC) of the US Armed Forces and the Joint Chiefs of Staff (OKNSH) state that the delivery and destruction systems are designed to strike Chinese anti-satellite systems, Iranian and North Korean nuclear facilities, fixed positions and mobile installations of nuclear warheads (PLC).

The second most important task of the NBGU is the elimination of the so-called systems “prohibiting access to the theater of military operations.” For example, the Chinese ballistic anti-ship missiles DF-21 in the event of war will significantly limit the maneuvering areas of the US aircraft carrier strike groups. It means that they are subject to preventive liquidation. The third task is the fight against terrorists. Tests on the Prompt Global Strike project are scheduled for completion by 2025.

"China and North Korea, but not Russia" 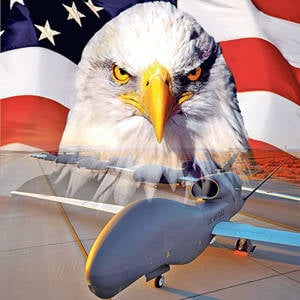 According to most American military experts, the fight against terrorism by means of the NBGU is the most dubious option to use hypersonic missiles. Over the past 10 years, there have been no cases where the information obtained was so reliable that the striking was not in doubt. The preparation of the operation to eliminate Osama bin Laden took years, and until the very moment of the landing of the "seals" in Pakistan there was no certainty that the "terrorist number one" would be in the calculated place.

The priority goal of PGS is, after all, well-defended stationary strategic objects and anti-satellite combat complexes. But China, North Korea and Iran have such goals by an order of magnitude less than Russia. So the American "quick strike" will obviously be directed against the mines of ICBMs, mobile ground-based missile complexes (PGRK), space observation facilities, command posts.

Russia also has systems “prohibiting access to theaters”. These are operational tactical missile systems (OTRK) “Iskander” deployed in the western and southern directions, covering most of the US military facilities in Europe. They also significantly complicate the strategic maneuver with the forces and means of NATO.

Freedom to Iraq, Enduring Freedom in Afghanistan and the Allied Force in Yugoslavia show that the United States always strives to deal a decapitating blow to the enemy’s top leadership in the early hours of conflict, although not always successfully. So the NBGU hypersonic weapons are great for this beloved strategy of America.

We are looking for "Topoli" and "Yarsy"

American experts argue that a disarming strike against Russia by means of a non-nuclear global strike is impossible. The main problem is the timely detection of patrolling mobile ground-based missile systems deployed deep in our country. They need to be tracked in real time, and beat as accurately as possible. Such accuracy can only provide satellite systems or aviation radar reconnaissance, such as Lacros satellites, U-2R reconnaissance aircraft, Joint Star E-8, RQ-4 Global Haw drones. But the Lakrosov’s flight time over Russia is limited, and the number of satellites does not allow for continuous monitoring, since the US Senate and Congress recently refused to finance the launch of new ones. During the passage of the PGRK satellites, it is possible to cover with powerful radioelectronic interference. The U-2R, RQ-4 and E-8 airborne radars have high performance, but scouts will still have to invade several thousand kilometers into the airspace of Russia, which is unrealistic. Moreover, the Strategic Missile Forces are now equipped with the most advanced mobile electronic warfare systems.

The positions of the mines of intercontinental ballistic missiles are well known, but it is difficult to destroy them with NBGU weapons. To destroy the lid or the shaft itself, to cause unacceptable damage to the rocket, you need to get within a radius of eight meters from the center of the position. Such accuracy is provided only by GPS, because the inertial system at hypersonic speeds is useless. On the final leg of the flight, the speed of the rocket and the aircraft should decrease from five to one thousand meters per second. The GPS jamming tools we are developing are closing the launch positions with an impenetrable jamming dome, while the C-400 and C-500 complexes intercept the speed-lost rocket from the hyper-to-supersonic.

These arguments of American experts sound convincing, but in Russia they think otherwise. It is known that the US Armed Forces Special Forces specially develop seismic sensors capable of detecting the movement of mobile missile systems based on ground pressure and the presence of exhaust gases in the air. The accuracy of the sensors is low, but if you organize a network of such small inconspicuous devices along the routes, you can get the required pointing accuracy.

The flight time of NBGU weapons from America is about one hour, and the Topol or Yars cannot go far. True, it would be impossible to place sensors on aircraft in the depths of Russian territory, and the PGRK routes are checked.

But the mine-based ICBMs are more vulnerable, since GPS navigation systems even have a weak satellite signal for successful operation. At last year's exercises of long-range aviation and EW troops at the Ashuluk training ground, it was not possible to completely drown out the GPS satellite signal by means of EW. In addition, American hypersonic missiles and aircraft can be equipped with missile defense systems with active radio-electronic and passive physical interference systems.

Nevertheless, the threat to the Russian Strategic Missile Forces is not as high as its domestic experts draw. Effective detection systems PGRK, continuous monitoring and targeting at the Pentagon is unlikely to appear before the 2020 year.

The NBGU’s first means of destruction should have been the sea-based Trident-D2006 ballistic missiles with a non-nuclear high-precision warhead proposed by the George W. Bush administration in 5. The US Congress treated them negatively and allocated modest funding. Later, the Strategic Command considered the Trident too risky. Launched a rocket will be immediately detected by means of a missile attack warning (MNS) and will provoke a retaliatory strike, because how can it be explained that the missile flying over Europe or Russia does not carry YBCh and is aimed at Afghanistan? By 2013, the work on this program was almost phased out.

But planning from the beginning of the 2000-s planning hypersonic aircraft (GZLA) HTV-2 and AHW may become the main and probably the only means of destruction of the NBGU. The device is launched by the launch vehicle, reaches a height of several hundred thousand meters, is separated from the carrier and plans to hypersonic to the target. If the HTV-2 should hit targets at a distance of 10 thousands of kilometers and run from the US, then AHW operates at half the range and can start with ground objects and submarines. To date, the HTV-2 has failed all tests, and AHW has a real opportunity to become a full-fledged combat system by the 2020 – 2025 years. It is planned that these GZLA will be deployed on the Pacific atolls Kwajalein or Guam, as well as on the basis of "Diego Garcia" in the Indian Ocean. Placement of AHW on submarines is questionable, since the size of the launch vehicle based on the Minuteman-3 ICBMs does not allow them to be placed on the Virginia and Los Angeles submarines, and by the time of the first test launches of the naval version planned for 2025 The Ohio strategic rocket carriers will be decommissioned.

GZLA is a deadly threat to the aerospace defense facilities, since the flight altitude passes below the field of view of the SPRN radars. Taking into account the hypersonic speed of the HZLA, the radar detection and anti-aircraft missile systems of the air defense system have only a few minutes to react, if not seconds.

HTV-2 from 2003 to the present cost the Pentagon just 600 million dollars, and AHW and even less - 200 million from 2008 year. If we evaluate the allocated funds and the complexity of the work, we can safely say that the NBGU project is at the end of the list of priority programs of the Pentagon, even yielding to research on individual methods of protecting military personnel.

Experts mistakenly refer to means of defeat of the “Non-nuclear rapid global strike” by Hypersonic Wave-Rider X-51 X-51 cruise missiles developed by the order of the US Air Force attack command. Over time, they can actually enter the NBGU system, but American experts point out that the X-500 technical solutions make it difficult to use it as a combat unit for long-range strikes. According to the command of the US Air Force, the optimal range of destruction by a hypersonic rocket is no more than 5 kilometers, which is less than the range of modern subsonic Tomahawk and ALCM missiles. The main problem hindering the use of the new rocket is the small range and the ability to easily detect it. The rocket can not maneuver at a speed of over 21 M at a height of 51 thousand meters. Due to the significant air resistance, when going down to the target, the X-XNUMX speed drops several times, making it an easy target for air defense weapons. Such problems are deprived of classic subsonic cruise missiles disguised at low altitude, so the US Air Force is very skeptical about the possibility of creating a hypersonic strategic cruise missile.

When analyzing the situation with the means of destruction of the NBGU, it becomes clear that as long as they fail to meet the stated characteristics and requirements for intercontinental destruction of targets and the least similar to the strategic weapon. The radius of application of the existing AHW system is only five thousand kilometers, and the development of the long-range HTV-2, according to the forecasts of American experts, will take up to 15 years and will require more funds than is currently allocated.

Given the existing developments, as well as the planned placements (Diego-Garcia, Guam, Kwajalein), there is no threat for Russia yet. In the current situation, the possibility of delivering a disarming strike to Russia with the help of the “Non-nuclear rapid global strike” is unrealizable in the next ten, and possibly 15 years.

The Pentagon is working in this direction with low costs. Tests of means of destruction go slowly, with big problems, only one AHW system is ready. However, the stated objectives of the NBGU unambiguously put the Russian Federation in the list of priority targets. In addition, AHW can easily be placed, as in its time, “Pershing-2”, in Europe, and the launch of the marine version of the USLW from the sea areas adjacent to Russia will require the deployment of a new group of EWS, significantly different from the existing one.

Ctrl Enter
Noticed oshЫbku Highlight text and press. Ctrl + Enter
We are
"Non-nuclear fast global strike" and Russian nuclear forcesMilitary reform as an integral part of the security concept of the Russian Federation: Systematic dynamic assessment
112 comments
Information
Dear reader, to leave comments on the publication, you must to register.