New competition "Name of victory" will do without the old "rake"?

November 6 2013
300
Media holding VGTRK and RVIO (Russian militaryhistorical society) launched the project “Name of Victory”. In this project, it is proposed to vote for one or another military leader out of a hundred personalities represented. Every visitor resource, at which the vote is held, can indicate the ten of the military leaders who, in his opinion, personify the image of victory. The contest organizers report that before submitting a hundred personalities applying for the name “Victory Name”, experts in the field of military history, as well as ordinary history buffs, put forward their proposals for several months. Based on these proposals, the final hundred was formed, which included historical figures and our contemporaries: from the governor and prototypes of epic heroes to officers of the imperial army, red marshals and generals of today. The voting results will be announced on May 9 2014 of the year. 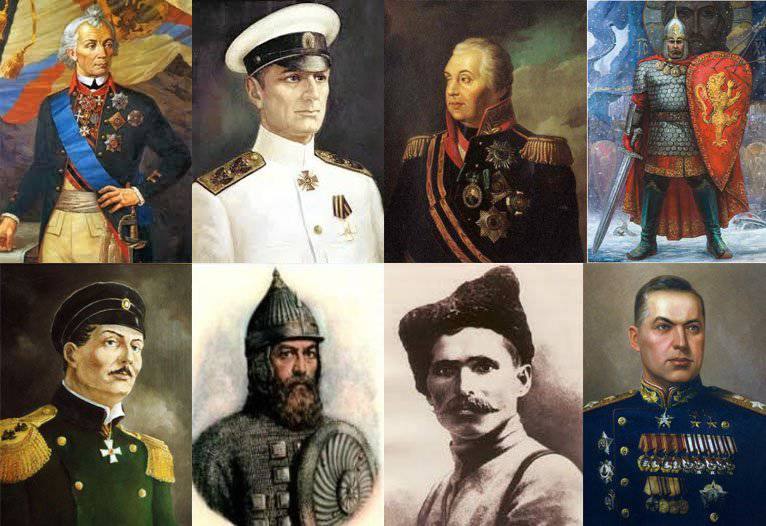 The Minister of Culture speaks about the new competition in the following vein:
We have no division into ours and not ours, into red or white. Together and Kolchak, and Frunze, and Kappel, and Denikin. The main criterion is that they all loved Russia, everyone wished her well, just everyone saw it differently.

From these words of Vladimir Medinsky it can be concluded that the competition is also held with the active support of the Ministry of Culture of the Russian Federation.

Let us now try to speak frankly about what the competition is about, and whether it has its weak points.
The competition is certainly important. It can be called an event. If we take into account that the level of historical (and not only historical) education in our time has fallen so noticeably because modern schoolchildren often build their ideas about national history on the basis of two dozen textbooks that often contradict each other (before adopting a single complex of school history textbooks), plus based on pseudo-documentary films shot with the financial support of very strange funds, it turns out that the competition looks more than timely. It’s not that this contest served as the ultimate truth and finally shed light for every representative of modern youth on all military history pages without exception, but at least he is able to draw attention to the course of Russian history. A contest is capable of attracting attention, by the way, not only of the younger generation, because according to its results there will be documentaries and a series of ten commanders who will win the contest. And the films will be interesting both to specialists and ordinary average viewers.

Weak sides? Well, without them, as we know, does not happen. One of the weaknesses of the new project is the opportunity for the organizers to step on the old rake. We all remember very well what the recently concluded Russia-10 contest resulted in, where you had to vote for the sights of Russia that Russians (and not only Russians) consider the most. During the competition, a large-scale scandal broke out connected with the revealed facts of almost forced voting in certain regions of the country. At one of the stages of the competition, it became clear that the voters were giving the title of the main attraction of Russia to the Grozny Heart of Chechnya mosque in Grozny. Millions of Russians, to put it mildly, could not appreciate the fact that an architectural structure with a religious orientation, built just a few years ago, can be called the main symbol of thousands of years of Russia. In the end, everything led to the fact that they began to vote no longer “for”, but “against”. To reduce the heat, the organizers offered the result of “Russia-10” in this version (without specifying the votes collected): Kolomna Kremlin, “Heart of Chechnya”, Nizhny Novgorod Kremlin, Trinity-Sergius Lavra, Mamayev Kurgan and the sculpture “Motherland Calls!”, Pskov Kremlin, Lake Baikal, Kizhi, Rostov Kremlin and Peterhof.
Again, this solution did not suit everyone, but the fire fighting competition was completed so as not to aggravate the situation.

After all, there was another contest “Name of Russia. The historical choice of 2008 ”, in which they chose the most respected political figure of the people. In that competition, too, was not without scandal. At, let's say, the intermediate stage, Stalin “broke loose” with a considerable margin. Apparently, calling Joseph Stalin as the main “Name of Russia” for the organizers was politically incorrect, and some confusion began again with the voices of “jurors”, TV viewers and Internet users. Everything ended with the victory of such a historical figure as Alexander Nevsky, and Stalin was “politically correct” moved to the third position, giving Stolypin second place.

Interestingly, in the contest “Name of Russia. The historical choice of 2008 ”and in the new competition“ Name of Victory ”there are repetitions. In principle, it is understandable, because often prominent military leaders and political (near-political) leaders were, as they say, in some people: Alexander Nevsky (and in “Name of Russia”, and in “Name of Victory”), Alexander Suvorov (and in “ The name Russia, ”and in“ The Name of Victory ”), and others. True, it immediately catches the eye that the organizers decided in advance“ not to allow elections ”to some, let's say, uncomfortable candidates. The same Joseph Stalin, for example. Is it possible to call him a warlord? Of course. But he is not on the list of 100 personalities. Obvious reinsurance by the organizers of the competition ...

Yes, and military leaders, heads of state (principalities) among the Rurik somewhat more (and to put it mildly) than the military leaders, the monarchs from among the Romanovs. Ivan the Terrible is on the list, Vladimir Monomakh is, Ivan III is, and, for example, Peter I is not. Of course, you can start a long debate on the fact that Ivan the Terrible is more a military leader than Peter the Great, but such a discussion will not lead to anything anyway and the logic of the organizers of the competition will not reveal to us.

But in general, the list is, of course, wide. Here there are such historical personalities that do not need a special presentation (the same Alexander Nevsky or Georgy Zhukov), but there are also such essays about whom in the representative part of the competition should be made more extensive (for example, Mikhail Loris-Melikov or Mstislav Tmutarakansky).

In general, the competition is just beginning. His focus on increasing interest in national history among Russian citizens is welcome, and I want to believe that this (the third) pancake will never come off the organizers. The top five (on 5 November 2013 of the year) is this:

Ctrl Enter
Noticed oshЫbku Highlight text and press. Ctrl + Enter
We are
The nuances of the final "battle" domestic commandersResults of the week. “Survived. We can say it was found in the dustbin, washed, cleared of cleanings - and he draws figs to us! ”
300 comments
Information
Dear reader, to leave comments on the publication, you must to register.