NATO is preparing to help the Libyan army 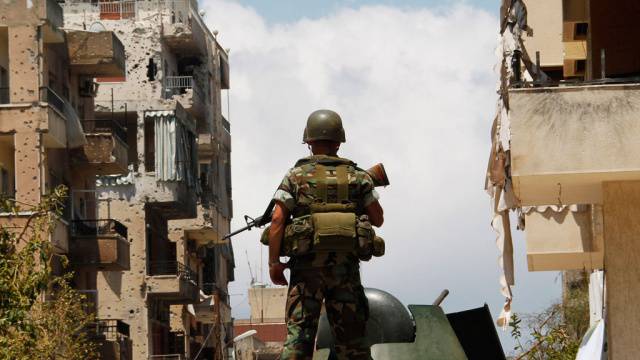 The Libyan government has appealed to the NATO leadership for assistance in building full-fledged defense institutions in the country. Previously, it was about the supply of Libyan state military units NATO military uniform. The difficulty lies in the fact that full-fledged state defense units in Libya have not yet been formed. After the intervention of NATO in the internal affairs of Libya and after the overthrow of Muammar Gaddafi, Libya became a country torn apart by contradictions, clan wars, attempts to redistribute property, economic and political upheavals.
Talk about NATO assistance to Libya is not the first year. At the same time, Brussels expresses less desire to help this country, since the main goal of the entire operation “Arab Spring” on the territory of this state was achieved in 2011: full-fledged strong power was destroyed, access to the oil wealth of Libya was obtained. At one time, this country itself could provide its army with everything necessary: ​​from military clothing to weapons. Now, Libya has switched to the use of foreign loans, the interest on which is “friendly” is huge. The army of Libya is a separate formation, the level of discipline in which leaves much to be desired, as well as the level of functionality. Over the past couple of years, bloody clashes have arisen even between individual units of the Libyan "army", in which even the representatives of ultra-radical Islamist movements that participated in the civil war have found a place. Moreover, it is these representatives who are trying to get as much power as possible into their own hands, turning military units into similarities to extremist groups that solve their own, but not state, tasks.
Against this background, NATO gives a positive response to the request of the Libyan government. Under current conditions, this can only mean that the new means will be in the hands of the radicals who have settled tightly in Libya, and the further continuation of the bloody internecine conflicts.
Apparently, NATO is going to help with the construction of military institutions with money and advice. Money - in the form of loans. Loans, including the purchase of NATO uniforms for Libyan soldiers and officers. According to some reports, military uniforms will be supplied at internal rates of NATO countries.
In Russia, it became also possible to buy such a form in specially created online stores with the ability to save money.
Ctrl Enter
Noticed oshЫbku Highlight text and press. Ctrl + Enter
We are
"Dead Hand" by Colonel Gaddafi (photo)Chronicle of the Libyan War
4 comments
Information
Dear reader, to leave comments on the publication, you must to register.