In the Emirates, an exhibition of the latest weapons IDEX-2011. Russia at this exhibition was represented by three pavilions that were popular with visitors to the exhibition. At the Rosoboronexport exposition, the people gathered most. On the big screen in the pavilion almost everything was shown weaponoffered for export by the Russian defense industrial complex, there was something to see. Among the enterprises and industrial associations in the center of attention were the corporation "Uralvagonzavod", "Concern air defense" Almaz-Antey "and Tula Instrument Design Bureau.

The fact that our air defense systems are the best in the world became clear 45 years ago, when in Vietnam the US military clashed with Soviet anti-aircraft missiles. It was from those times that the quality of Russian weapons, providing air defense of the country and troops, repeatedly increased in the eyes of the world community. Worthy analogues to our "beeches", "three hundred", "tori", "tunguskam" and many other systems have not been created, even in high-tech America. Therefore, interest in the Almaz-Antey exposition was expected, states wishing to reliably protect their skies, are adopting what the Russian concern is releasing today. And the exposition itself turned out to be informative and well thought out.

Anti-tank guided missile systems that the Tula KBP manufactures are also considered the best in the world. Neither the Israeli “Merkavi” nor the American “Abrams” could not stand against them, as the combat practice in the Middle East showed. The authority of the Tula instrument-makers grew noticeably when they were able to complete all the work on the new Pantsir missile-cannon complex. "Pantsir" has already begun to enter into service with the UAE army. At the IDEX-2011 exhibition, for the first time, one of the emirate "Pantsiray" was demonstrated in war paint. 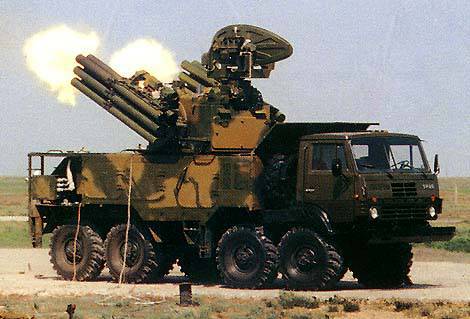 The interest in the Uralvagonzavod exposition is explained by the fact that our armored vehicles are spread all over the world, and the Middle East is simply awash with it. It was here in the Middle East that happened tank battles in which the Soviet T-55, T-62 and T-72 converged with American, British and French tanks. Also in this hot region, our BMPs and armored personnel carriers are doing excellent service. The UAE army adopted the BMP-3 into service even earlier than the Russian army and is very pleased with these vehicles. Therefore, our armored vehicles at the IDEX salons deserve genuine interest and, importantly, respect. 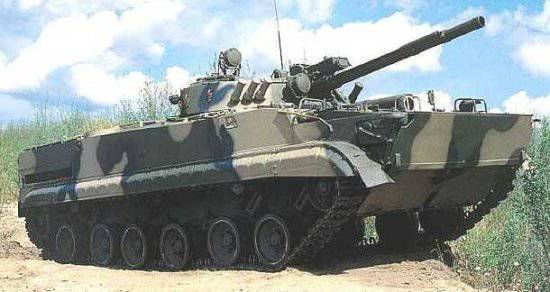 Although this time there was no our cars at the demonstration site, only French “Leclercs” performed on it. But on the open area stood, attracting attention, the newest Ukrainian tank "Oplot". I must say that none of the guests of the salon passed by him. The Ukrainian Oplot is a Russian T-80, the main difference is that the Kharkov machine is equipped with a purely Ukrainian diesel boxer 6TD-2Е. The remaining differences lie in the details over which the specialists of Kharkiv Morozov Design Bureau worked and thanks to which the Ukrainian tank turned out to be quite successful. 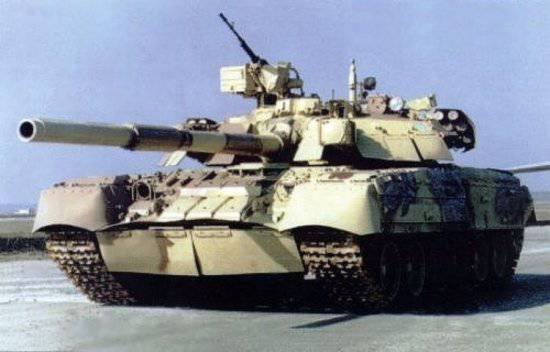 This tank weighs 50 tons. Such an increase in mass is caused by a significant increase in body armor using composite materials. The tank has a multi-layer dynamic protection, effective even against sabot projectiles.

The know-how of the Ukrainian tank is a powerful diesel - 1200 hp, as well as an automated and computerized motion control system. The tank does not use a bulky hydrovolume transmission, but the advantages of this transmission are present. Managed "Oplot" steering wheel very smoothly. If the electronics fails, the machine can be controlled in manual mode with the help of ordinary mechanical stresses. A powerful diesel engine and control system made it possible to introduce reverse reverse gear, which made it possible to move backward at a speed of 35 km / h.

The creators of the tank "Oplot" say that their offspring in no way inferior to the new German tank "Leopard A7", while it is more dynamic, reliable and has better than the German, the combined protection.

Our tank designers objectively and appreciated the car of Ukrainian colleagues. The head of the St. Petersburg design bureau, in which T-80 was once designed, Valery Kozishkurt, said that he was delighted with the innovations that Kharkiv had managed to implement in Oplot. He also noted with regret that almost everything that the new Ukrainian tank is remarkable for today was ready to do in Russia at the beginning of the 90s of the last century. In general, according to Russian tank builders, if the MoD wanted it, the Russian army would have long been truly the best tanks in the world.

In the print editions devoted to the IDEX-2011 salon, the tank theme was also discussed very actively. Discussions and publications devoted to Russian tank building were disappointing for us. In particular, some Western military experts expressed the opinion that after the closure of the Russian Defense Ministry project for a promising T-95 tank, tank construction in Russia would inevitably fade. Objectively, China, Germany and Ukraine are among the leaders of the world tank building industry.

Corporation “Uralvagonzavod” is doing everything possible to maintain the advanced school of the Soviet tank construction in the new Russia. And if all the same mutual understanding is established with the native Ministry of Defense, then our tank builders will succeed.

Uralvagonzavod planned to bring two of its best samples to IDEX-2011 - the most recent version of the T-90AM tank and the Terminator tank support vehicle. It didn’t work out because of bureaucratic obstacles. Ukrainian Oplot and even German MBT Revolution would have looked impressively. 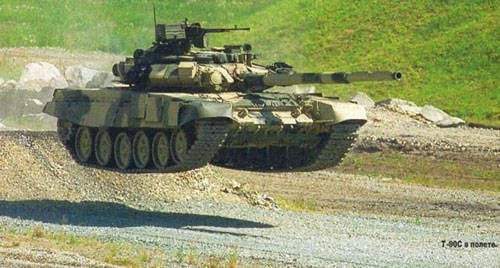 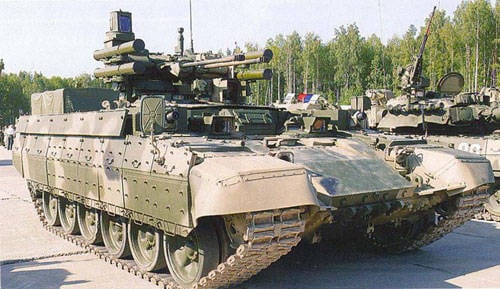 At the upcoming salon in Nizhny Tagil, these samples, together with other innovations of the domestic tank construction, of course, will be presented. But it is unlikely that all the participants in the IDEX-2011 showroom will visit Nizhny Tagil and look at the beautiful samples of Russian weapons.