American nuclear bombs B61 will be controlled 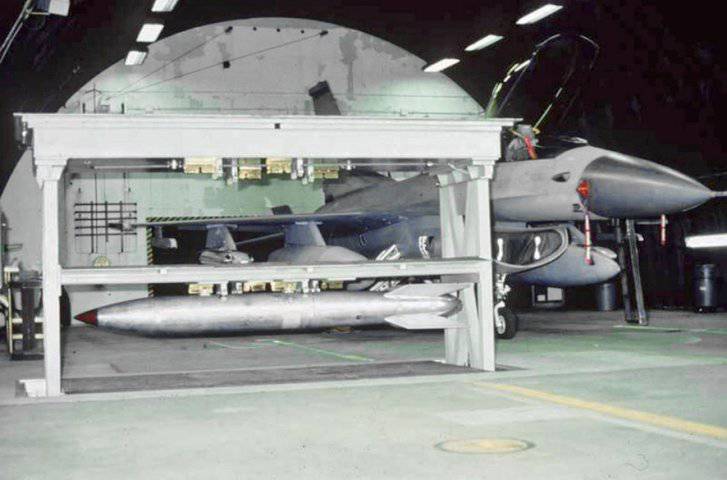 The B61 bombs were developed by the Los Alamos National Laboratory and produced by it from the 1965 of the year to the end of the 1990's in nine production versions. It is estimated that the total number of manufactured ammunition is 3155, of which at least 1000 units now remain in service or in storage. Currently, the B61-3 and B61-4 low-bomb bombs are in service with US and NATO tactical aviation, while the B-61 and B-NNUMX and B-NNXX altitude-bomb bombs are armed with B-7 and B-NNXX-61 high-altitude bombers.

The B61 modernization program was developed as part of a common project to modernize and unify the American nuclear arsenal, designed to replace 12 unique types of nuclear weapons with just five types used on various types of warheads - ICBMs, SLBMs and bombs. Modernization of the B61 is now regarded as a priority, since it has the oldest charge design, the basic elements of which were developed as early as the beginning of the 1960-s.

The LEP program will create a single B61 bomb model, called Mod 12 (B61-12), which will replace all modifications of the B61 tactical and strategic bombs (as well as a small number of B83 bombs stored in warehouses). Since the production of new nuclear charges has not been carried out in the USA since the end of the 1990-ies, the B61-12 charge will be a modernized charge of cash bombs. It is estimated that B61-12 will have a power in the region of 50 kilotons.

At the same time, the B61-12 bomb will become highly accurate, receiving a guidance system similar to the guided JDAM bombs. There will also be a new tail section with steering wheels. The new tail section will make it possible to abandon the old parachute system, as well as allow the B61-12 bomb to be placed in the internal weapons bays of the main American advanced tactical aircraft carrier - the F-35 aircraft.

The US National Nuclear Security Administration (NNSA) predicts the cost of the B61 Bomb Upgrade Program at 8,1 billion to the 2024 year. Such a cost is expected to cause discontent in Congress, especially under budgetary constraints and sequestration. US Deputy Secretary of Defense for Global Strategy Issues Madeleine Cridon said at a congressional hearing that "the impact of sequestration threatens to undermine efforts [to modernize nuclear warheads] and contribute to the further increase in unplanned costs by lengthening development and production periods." She also pointed out that the budget cuts as a result of the sequestration have so far delayed the B61 modernization program by about six months, and the start date for the production of the first B61-12 serials has already "gone" before the start of the 2020 year.

Ctrl Enter
Noticed oshЫbku Highlight text and press. Ctrl + Enter
We are
US completed tests of tactical thermonuclear bomb B61-12The results of the second stage of the joint antiterrorist exercise of the Ala-Too-Anti-Terror-2013 divisions of the CIS states
42 comments
Information
Dear reader, to leave comments on the publication, you must to register.