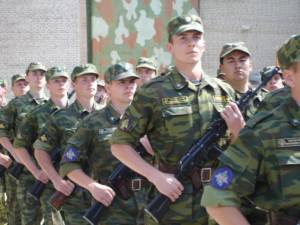 Relatively recently, the process of adopting the military budget for the 2015-2016 years was actively discussed in the media. Despite the sometimes unfounded criticism and rumors about its possible reduction, it can be said that it has been carefully worked out and takes into account all the needs of the armed forces of the Russian Federation. It is obvious that the adoption of the budget is accompanied by a lot of consultations, and it is repeatedly adjusted, perhaps, therefore, there were some discrepancies in its estimates by experts.

In the course of military reform, the army undergoes a series of changes. The purchase of new weapons, the improvement of living conditions in the barracks, the development of modern technologies - this is not a complete list of tasks facing the Ministry of Defense.

Changes in the Russian army concern not only professional military, but also conscripts, who are doing compulsory military service. Now in Russia, the autumn conscription continues and the Minister of Defense of the Russian Federation Sergei Shoigu has once again confirmed the intentions of his ministry to make service in the army as prestigious and comfortable as possible. "RIA News"Convey his statement made during the plenary meeting of the Public Council under the RF Ministry of Defense:" We are moving further along the path of humanizing military service. Our conscripts have two days off, they use the opportunity to go on leave in civilian clothes, call by mobile phone, and also use e-mail and communicate on Skype. "

By the end of the year, the issue with the organization of the so-called Smorgasbord in army canteens. Already, most military units are fed in a modern way, when soldiers are suspended from performing tasks that are not characteristic of them in the form of peeling potatoes and slicing bread. Food for recruits provide "civilian" outsourcing companies - professionals in the food market. This increases the quality of food that goes to the soldiers' tables. All products are thoroughly tested, because outsourcing companies that organize catering in a military unit enter into an agreement with a supplier that has all the necessary documents and certificates for products. Now recruits have access to a large selection of hot first and second courses, salads and drinks.

Ahead is the completion of the autumn draft and summing up the next results of the reform of the armed forces. Already we can say that the results achieved will help consolidate their success next year.