Russia may be left without the Mistral 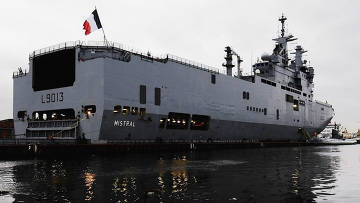 Negotiations between Russia and France on the purchase of Mistral helicopter carriers have stalled. The parties can not agree on the cost of the ships - from the initial 980 million it can grow to 1,24 billion. sheet, said on Thursday the newspaper Kommersant.

Rosoboronexport, the VTS FS, the Ministry of Industry and Trade, and the United Shipbuilding Corporation (USC) held talks in Paris last week with the French Defense Ministry and the DCNS concern about Russia's purchase of two Mistral helicopter carriers, told Kommersant several sources close to the negotiations. Upon returning to Moscow, the members of the delegation "informed the first persons" that the negotiations had reached an impasse - the parties "have a number of fundamental differences, primarily at the price of the ships purchased." Russia is ready to buy both Mistral for no more than? 980 million, but France insists on a contract price of at least? 1,15 billion. Rosoboronexport, VTS FS, Ministry of Industry and USC declined to comment.

The final commercial proposal of the French side on Mistral Russia should get 15 March, they say sources "Kommersant". However, price negotiation may require "separate negotiations on the value of the contract with French President Nicolas Sarkozy." Who exactly will lead them - President Dmitry Medvedev or Prime Minister Vladimir Putin, Kommersant sources do not speak, and Prime Minister’s spokesman Dmitry Peskov told Kommersant yesterday that he was not aware of any disagreements on the Mistral contract. The telephone of the press secretary of the president, Natalia Timakova, did not answer.

According to Kommersant’s sources, the reason for the disagreement over the price of Mistral is “the unprofessional approach to the contract by the Ministry of Defense.” The fact is that at the talks the Russian delegation proposed to the French side to include in the price of Mistral also the price of licenses and technical documentation for the construction of individual units of these ships in Russia. It is assumed that subcontractor of the contract in Russia will be part of the USC "Admiralty Shipyards", which on the first ship must perform 20% of works, on the second - 40%.

However, the French side did not agree to include licenses and technical documentation in the cost of the project, and, says one of the sources of Kommersant, “they have certain legal grounds for this”. In December 2010, Deputy Commander-in-Chief of the Navy, Vice Admiral Nikolai Borisov signed a protocol with France, which spelled out the contract value of X 1,15 billion. It consists of the price of two ships (? 980 million), as well as some logistics costs (? 131 million) and crew training (? 39 million). “This initiative caused outrage in the government because Mr. Borisov did not have any authority to sign the protocol,” says a Kommersant source close to the VTS FS. “This scandal,” he said, “is fraught with not only a complication of the negotiations on Mistral,” but “can overshadow relations with the French side at the interstate level.” The Ministry of Defense refused official comment.

Nikolai Borisov signed the protocol without coordination with Rosoboronexport and the Military Technology Committee, and when the French Defense Ministry and DCNS presented it to the Russian delegation, “it came as a complete surprise to her,” Kommersant sources say. France estimates the cost of licenses and technical documentation for two ships, which are also not included in the contract value, at the level of? 90 million. France is ready to give technical documentation free of charge (estimated at? 40 million) if Russia undertakes firm commitments to purchase two more Mistral.

There are other differences between the parties, say sources of "Kommersant". For example, the Defense Ministry is still making changes to the terms of reference for the first two ships, and this gives the French side additional arguments to increase the contract price. In addition, Russia and France can not decide where the joint venture will be registered, which will be engaged in the construction of Mistral - at a Russian or French shipyard, and this also requires discussion "at a higher level."

AST Center Deputy Head Konstantin Makienko is not surprised by the disagreements on the Mistral contract and notes that "this is a deal in which everything can change and be played back even after the contract is signed." However, if the deal again reaches the leadership level of the two countries, the expert says, then the parties will certainly reach a compromise on price. But in any case, adds Mikhail Pak from the Aton Investment Company, it will not be easy to deploy a "much-advertised" deal.