How Hollywood was in the wake of the Nazis

November 5 2013
30
"Collaboration. Hollywood Pact with Hitler" - this is the name of the just-released sensational book of the American historian Ben Urvand. BBC columnist Alexander Kan spoke with its author. 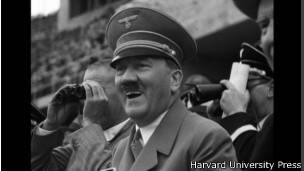 BBC: How did the idea of ​​such an unexpected and, without exaggeration, a shocking research come about?

Ben Urvand: I worked at the State Archives of Germany in Berlin, looking at Hitler’s personal archives. There, among other things, there was evidence that he almost every day watched a new film, and cited his opinions about these films. I was surprised to learn that the Fuhrer adored comedians Laurel and Hardy, that he cried over films with Greta Garbo, that he liked King Kong and did not like Tarzan.

I had already decided that I would write a book about Hitler’s cinematic tastes and preferences, when I stumbled upon a document that seemed to me completely shocking. It was a letter from the XX Century Fox film studio, its German division, in which Hitler was asked to express his opinion on the significance of American films for Germany. A letter ends with loyal "Heil Hitler!"

At first, I even doubted the authenticity of this document, but it was printed on the letterhead of XX Century Fox studio, it had a date - January 1938 of the year - and I realized that I came across a topic about which we know almost nothing - the theme of Hollywood cooperation with Nazi Germany in 30's.

Almost 10 years took me to archival research in Germany and the USA, until the picture gradually emerged, from which it appeared that in 30-ies Hollywood studios invited the Consul General of Germany in Los Angeles to private screenings, after which according to his instructions Some adjustments were made to the films, words and frames unfavorable for Germany were eliminated. All this was done to preserve the profitable German market. 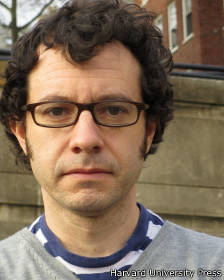 BBC: But after all, Hollywood was created mainly by Jews from Eastern Europe, and by the 30 years this first generation of Hollywood magnates was still firmly in place. In addition, immediately after the Nazis came to power in Germany, many directors — Ernst Lubich, Fritz Lang, even the great Billy Wyalder — fled from Europe and took refuge in Hollywood. It is difficult to keep in mind, as in such a climate, in such an atmosphere of rejection of Nazism - even if its terrible future crimes were not yet committed - could the American film business cooperate with the Hitler regime? Is it all about the irrepressible thirst for profit?

Ben Urvand: My book is история individual individuals and the decisions that they made in specific historical circumstances. There is no doubt that the leaders of the largest studios provided their films to the Nazi censors in order to maintain access to the German market.

Already in May, 1933 of the year, literally several months after Hitler won the election, the head of MGM, Louis Meyer, when he was presented with a screenplay of a film with potentially anti-Nazi content, said, "I present the film industry, we have huge profits in Germany, and as long as I make decisions, this film will not be put into production. "

I found a lot of documents confirming a similar position of film magnates. But at the same time, in no case should we assume that it was characteristic of the entire film community in Hollywood. I show in the book that in this community in 30 there was a very clear split.
In the same 1933 year, for example, screenwriter German Mankiewicz, who a few years later wrote the screenplay of the famous "Citizen Kane", proposed a script about Nazi persecution of Jews in Germany, in which he prophetically predicted that Hitler would begin to destroy Jews. He presented the script for the consideration of several studios. But the studios eventually met the German consul in Los Angeles, and the film was never shot.

However, many writers did not leave attempts to push into production of such films. In fact, the hero of the book, Ben Hecht, one of the most authoritative and successful screenwriters in Hollywood, who already in the 40-ies, when information about the Holocaust began to reach America, did more than others to ensure that what is happening in Europe. 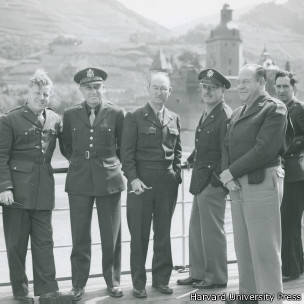 So this question - to cooperate or not to cooperate with the Nazis - was the subject of fierce debate in Hollywood. But, in any case, with regard to the studio leaders, the people who made the last decision, their main motivation was the preservation of the German market.

BBC: It is known that pro-fascist sentiment was very common in America 30-s. Written in the genre of alternative history, the novel "The Conspiracy Against America" ​​by the famous American writer is based on the assumption that not Roosevelt wins the 1940 election of the year, but Charles Lindberg is an American pilot who became a national hero after being the first in the world made a transatlantic flight from New York to Paris. Lindberg went into politics, speaking from pro-fascist and frankly anti-Semitic positions, and the prospect of his victory in the elections was very real. Can we assume that the position of Hollywood studios in their relations with Nazi Germany was to some extent a reflection of such views?

Ben Urvand: Of course, the pro-fascist movement, as well as the growth of anti-Semitism, were real factors in America’s political life of the 30s.

The Fascist marches were held in Los Angeles. The Jewish Anti-Defamation League was really concerned about this growth and asked the studio itself not to pedal Jewish themes and not to attack the Nazis. This, as they feared, would lead to an even greater squall of very characteristic accusations from the mouth of the fascists and anti-Semites that the entire American film industry was in the hands of the Jews. 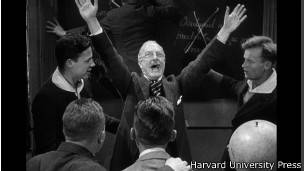 Scene from the movie "On the Western Front without Change" (1930): the teacher encourages students to join the German army.

However, I was not able to find documents indicating that the studios made decisions at the request of the Anti-Defamation League. This could help them to keep a good face on a bad game, but as far as I could find out, their only motivation was money.

BBC: In the control, the censorship to which the American film production was subjected by the German authorities, which of the parties was active? Who initiated this contact?

Ben Urvand: The first offer of control came from the Nazis. In March 1933, the German consul arrived in Los Angeles, and, as stated in the official document, the goal of his mission to Hollywood was to prevent possible conflicts and establish regular contacts with the film industry.

Yes, the Nazis initiated this system, but as soon as it was created, the studios realized that they could not avoid cooperation in one degree or another. In some cases, they only obediently carried out the instructions of the Ministry of Propaganda, in others they themselves showed creative initiative.

For example, in May 1933, the Ministry of Propaganda informed the studios that if they wanted to continue working in Germany, they would have to dismiss half of their representatives in the country. Studios fired everyone. 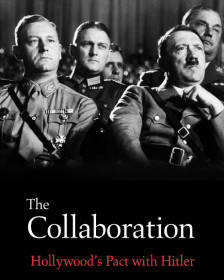 Or in December 1938, the studios had problems with the export of money from Germany. Paramount and XX Century Fox got out of trouble, creating newsreel releases in a frankly pro-Nazi spirit, and MGM invested in the production of German military equipment.

That is, the largest American film company made a conscious decision on the financing of German weapons - in December 1938 of the year, a month after the terrible Jewish pogroms of Kristallnacht, and only 8-9 months before the start of World War II. After the start of the war, MGM and Fox provided 12 films to support the German army.

BBC: Could you give examples of specific films that the studio subjected to voluntary censorship at the request or under the pressure of the Nazis?

Ben Urvand: In the film "The Life of Emile Zola," a considerable place was occupied by the story of Alfred Dreyfus, captain of the French army, a Jew accused of espionage. This story has become a pretext for a wave of anti-Semitic sentiments in France. Warner Brothers, who hadn’t even had a business in Germany at the time of the film’s release, after the call of the German consul removed all references to Jews from the movie.

It was supposed to be Hollywood's first significant anti-Nazi film. After hearing about him, the German consul called the studio, watched the film with Louis Meyer, after which the duration of the action was shifted a few years earlier, and all references to the Nazis or Jews from the film were cut out.

BBC: You write in the book that even the "Great Dictator" Chaplin - a film considered frankly a mockery, a parody of Hitler - also did not go without the intervention of censorship.

Ben Urvand: Indeed, even before filming began, Chaplin sent a copy of the script to the Library of Congress to register his copyright.

I managed to find this specimen, which before my discovery was virtually unknown. There was an original Chaplin idea - not one that was ultimately embodied on the screen in 1940.

Chaplin sent his script the day after the pogroms of Kristallnacht, and, obviously, for him it was very important. The shot is completed with a happy ending, a speech of a repentant dictator, which, frankly, is hard to believe.

According to the original scenario, after this speech, he fell into a concentration camp, where he was beaten and bullied. That is, the original script ended up much more pessimistic and gloomy.

BBC: How was your book greeted in America?

Ben Urvand: Different. Historians greeted her with great interest and great sympathy. The Jewish community also welcomed the book, I received many invitations to perform at various Jewish festivals.

Film historians and film critics have met her much more cautious, and even hostile. These people are accustomed to a completely different story of Hollywood, they are busy perpetuating the myth of the Golden Age of Hollywood and perceive my book as an attack, as a desecration of what is inviolable for them.

The problem, however, is that their research was always quite superficial, they worked exclusively in the American archives, and the materials of the German archives reveal a completely different side of this story.