In Russia and the rest of the wreckage of the Soviet Union, the time of the "Soviet" Muslims ends, those who once wore a party membership card, consisted of a Komsomol, was a pioneer and actually remembered formal rituals only during holidays and funerals. Soviet Muslims, like other citizens of the Union, built space ships, aircraft carriers and cruisers, icebreakers, hundreds of civilian and military aircraft, nuclear power plants, received the best education in the world, became scientists and engineers, teachers and doctors, together with their Russian brothers beat the hordes Hitler and smashed the Mujahideen in Afghanistan. They built the best order in the world.

The time is coming for new Muslims, for whom they have prepared “spiritual leaders” in Saudi Arabia, the United Arab Emirates, Qatar, Egypt and Turkey. The effect of this omission is already obvious and very dangerous. In particular, in Tatarstan, traditional Islam is successfully pushed to the sidelines. And the mentality, clothing and marital behavior of the part of young Muslims Tatars copy the Arab mentality. For them, the center of the universe is not Kazan and Moscow, but Riyadh and Cairo. Many wealthy Tatar families already have satellite dishes that are tuned to Al-Jazeera or Al-Arabia.

Not so long ago, Talgat-hazrat Tajuddin, chairman of the Central Spiritual Board of Muslims of Russia, stopped the process of sending young people to Saudi Arabia, Egypt and other Arab countries. But it's too late, the process is running. There are already circles in Russia that can sponsor the sending of young people themselves or find sponsors abroad. Someone has personal funds for the trip. Young people now go on their own, they don’t need the consent and blessing of representatives of traditional Islam. The fact that Muslim youth in Russia falls under the influence of others is radicalized by Islamic ideologues. There is already a young growth of clergy, which has really become the bearer of the ideology of Wahhabism, Salafism. These young people sincerely believe that the traditional Islamic ideology, which was in Russia, is unacceptable for them, the traditionalists for them are the same “unfaithful”, “unclean”, as representatives of other religions. Moreover, young people from Russia, the Crimea, the republics of Central Asia are already going to fight for the “caliphate”. Some of them die, remain abroad, but many return, having the experience of fighting with the "infidels."

Of great concern is the fact that the well-known Islamist and fighter against Islamism on the "information front" Raisa Suleymanov Tatarstan prosecutor's office issued a warning "about the inadmissibility of extremist activities." As a result, the man who fought against radicals and extremists literally beat the alarm, telling fellow citizens of the terrible danger that could lead to rivers of blood in Russia, was accused of "extremism." True, prosecutor Kafil Amirov, who rendered this unjust decision, was hastily removed from this position. This is a real example of the work of the “Wahhabi holding”. This term coined the Yakup, who was murdered by Islamists in 2012. The basis of the "holding" consists of hidden Wahhabis and "Muslim brothers" in the power and law enforcement structures of Russia. And their agents of influence, such as the chairman of the Islamic Committee of Russia, Heydar Jemal, work in the information field of the Russian Federation and propagate Islamism.

The ideology of Islamism is the real and dangerous enemy of Russian civilization. Islamists think strategically. Over the past two decades and more, they have done a tremendous amount of work in the fields of ideology, economics, and military affairs. According to their thoughts, the Russians “occupied” the Volga region, the Urals, Siberia, the Caucasus, which are part of the Islamic world and should become the emirate of a single Caliphate in the future. Wahhabi cells and caches weapons they are already found not only in the North Caucasian republics, but in Central Russia, the Volga region, Tyumen, Omsk and the Yamalo-Nenets Autonomous District. Inside Russia, they create their own system - an “anti-system”, with which “intercultural and inter-religious dialogue” is impossible. Islamism is a non-negotiable ideology and system, it was created for war and the destruction of “infidels”, including traditional Muslims.

According to theologian Farid Salman, the process of introducing radicalism into society has several stages: “The first phase is the seizure of the cultural and educational sphere, the second is the seizure of the sphere of spiritual governance, the third is the entry into power, the fourth is the seizure of power. All three of these stages, we have already successfully passed "("Traditional Islam has lost the war for the minds of Muslim youth"). The theologian also noted that the ethno-religious composition of the country's population is changing in Russia, the composition of the population, its age, and at the same time changing its culture and views. In addition, a link between jihadists and the protest movement is possible. In addition, in Russia, the Wahhabis, Tabligans, "Muslim brothers", Hizb ut-Tahriris and others, who are ideological opponents, and on historical homelands of each other are called infidels, heretics, act practically as a united front. The principle "the enemy of my enemy is my friend" operates here. 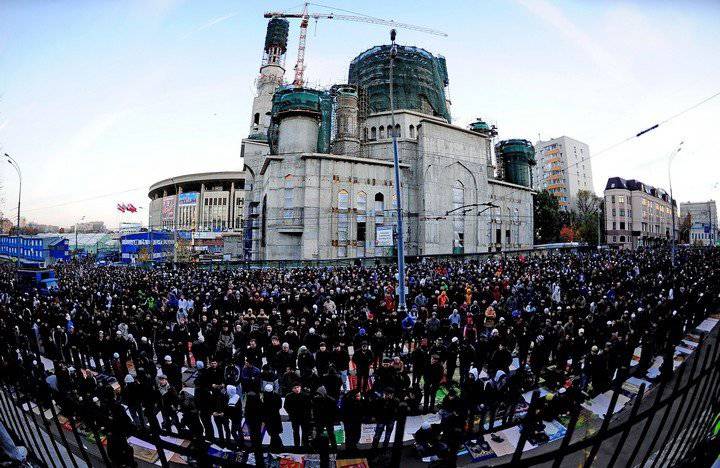 Who is behind the "Islamic project"

The British back in the period when they were working to subjugate the regions of the Ottoman Empire, provided financial and organizational support in the formation of the Wahhabi movement and the Wahhabi kingdom. That was how Saudi Arabia was created - an artificial state made of Muslim holy lands, cities of Mecca and Medina, parts of Yemen, the territory of Hijaz, Nejd and other territories.

Britain and then the United States for decades nurtured and supported the source of infection - Saudi Arabia and other Arab monarchies. At the end of 1970, the “Islam against Communism” project appeared, later it was transformed into the “Islam against Russians” project. Western analytical centers concluded that in order to prevent the process of self-organization of the post-Soviet space (the creation of a new empire), it is necessary to launch the program of Islamization of the republics of the former USSR. In addition, with the help of Islamic radicals, they decided to reformat a number of countries in the Middle East and the Balkans, mostly former allies of the USSR. The Islamist movement met the basic requirements of controllability, ease of distribution and self-financing. Western think tanks worked together with representatives of the Arab monarchies.

The wreckage of the USSR, the Balkans and the countries of the Middle East, besides the governing core of the Arab monarchies, were awaiting fragmentation, the creation of pseudo-autonomous Islamic states that would serve the interests of the West. This process was to be accompanied by a series of violent local wars, conflicts, uprisings, a wave of terror, purges on religious and ethnic grounds. All this we saw on the ruins of Yugoslavia, and in recent years during the "Arab spring". Russia was hit too. She - the main prize of the West. Both Chechen wars, a series of terrorist attacks throughout Russia, the growing influence of the Islamists are all the consequences of this program. In the morally defeated, post-Soviet Russia, losing its civilizational roots, where NEP-2 won, with its slogan “Enrich yourself!”, This global Islamic project found fertile ground.

However, by releasing the "beast from the abyss," the United States made a big mistake. At present, Islamism is more and more reminiscent of Hitler’s Nazism. By believing in one’s own uniqueness, infallibility and desire to build one’s world order. The virus that grew the Anglo-Saxons, mutated and became unmanageable.

First, we, like air, need our own state ideology. The state and the people should have a goal, a program and an ideology. Russia is not Holland and not Georgia. Great Russia, with the inclusion of White Russia and Little Russia, is a huge civilization, which has its own development matrix and claims a leading role in the world community. Many thinking people do not for nothing consider Russia the conscience and the heart of the planet. Russia can give the opportunity to humanity to get into the “tomorrow”, and not only the “elect”, but all people. On the other hand, Russia is a kind of “last safeguard” that saves humanity from complete degradation, brutality, and stops a barrier for those forces who dream of global domination, total control over people.

Secondly, the Russian society and government must realize the full depth of the threat from the “Islamic project” and its scale. This is a global threat. A serious analysis of this threat and clear, clear conclusions leading to an adequate response are required.

Thirdly, it is necessary to understand that it makes no sense to negotiate with the Wahhabis, to try to coexist. Only a complete ban on this hostile ideology! Here it is necessary to take into account that Wahhabi is not necessarily a hijab, a beard and a fanatic's look. A convinced Wahhabi in our society may well get an education in Oxford and Cambridge, work in a state structure, a bank, or sit in a local legislative assembly.

Fourthly, it is impossible to break the Russian Islamic community according to the principle of “wood is being cut down - the chips are flying.” It is necessary to proceed to the gradual formation of a completely independent “Russian Islam”, free from the influence of alien conceptual and ideological centers, when the spiritual leaders of Muslims of Russia are educated and receive education in Moscow, Kazan, Ufa, Orenburg, become patriots of their Homeland, ready for a “holy war” against any enemy of Russia, as in the years of the Great Patriotic War. “Russian Islam” will help to return to the orbit of Russia those fragments of the USSR, with a predominance of the Muslim population, which are currently spiritually degraded and attracted by centers hostile to Russia.

Ctrl Enter
Noticed oshЫbku Highlight text and press. Ctrl + Enter
We are
Russia, Turkey and the "Crimean Question"Is the prince in Yemen dead or dying of a heart attack? How the Emirates got involved in the war
129 comments
Information
Dear reader, to leave comments on the publication, you must to register.