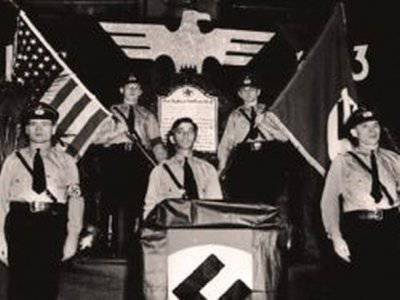 The traditional historiography of World War II paints a picture in which the United States fought valiantly against Germany and its allies, throwing enormous strength and resources against the enemy. However, everything was not quite so: American moneybags and their loyal friends in the US government for a long time could not forget their faithful pre-war ally - Hitler.


While the American soldiers were gallantly dying in Sicily and on the beaches of Normandy, spare parts and the latest technologies flowed into the hands of the Nazis from the United States.

In 1931, the American journalist Annette Anton from Detroit News interviewed the new leader of Germany, Adolf Hitler. A reporter noted a portrait of the main American car merchant, Henry Ford, above the desk of the chief Nazi. In response to Anneta’s surprise, Hitler sincerely said: “I consider Henry Ford to be my inspiration.”

Ford was not by chance among the idols of the Fuhrer. It was thanks to Ford, as well as a number of the largest US moneybags, that there was a hidden increase in the military potential of Germany. In the prewar years, the economy of the Reich grew by leaps and bounds.

Probably the most typical representative of American business, and at the same time, a great friend of Hitler can be called Henry Ford, the eldest. Being one of the main tycoons of the American market, Henry Ford provided serious financial support to the NSDAP. In gratitude, the Führer not only hung his portrait in his Munich residence, but also wrote with admiration about Ford in his little book, My Struggle. In response, Ford annually congratulated "his German friend" on his birthday, while giving him a "gift" worth 50 000 Reichsmarks.

Even before the start of the war, the Nazis received 65 thousands of trucks from Ford offices in Germany, Belgium and France. In addition, the Ford subsidiary in Switzerland has repaired thousands of German trucks. He repaired the German motor transport and the Swiss branch of another American auto giant General Motors, which concurrently was the largest contributor to the German auto concern Opel, successfully cooperating with it throughout the war and receiving fair dividends. But Ford was out of competition!

According to the American military historian Henry Schneider, Ford helped the Germans in obtaining rubber, vital for German industry. Not only this, until the very beginning of World War II, the owner of the auto giant USA supplied Hitler with military equipment, for which the Fuhrer awarded the hero of the Third Reich to foreigners, the Great Cross of the German Eagle, in honor of Ford's 75 anniversary. The German consul even made a trip to Detroit to personally hang up the Golden Cross with a swastika on the chest of the automaker. Ford was delighted with this award. The grand dinner party organized on the anniversary day - 30 July 1938, was attended by over 1500 richest Detroiters.

Even with the outbreak of World War II, Ford did not interrupt cooperation with the Nazis. In 1940, Ford refused to assemble engines for planes in England, which was at war with Germany, while in the French city of Poissy, its new plant began to produce aircraft engines, trucks and cars for the Hitler Army, which entered the Wehrmacht's arsenal. And after 1941, the Ford branch in occupied France continued to produce trucks for the Wehrmacht, and its other branch, in Algeria, supplied Hitler's General Rommel with trucks and armored cars. Even in April 1943, when the Soviet Union was engaged in bloody battles with the Nazis, Ford's French branches worked exclusively for Germany's benefit. Cargo "five-ton" and passenger "Fords" were the main army transport of the Wehrmacht. The main issue for the corporation was the profit that it tried to get at any cost. At the end of the war aviation the Allies bombed the Poissy factory, but Ford did not touch the same factory in Cologne, Germany, although almost the entire old city was destroyed. What is noteworthy, after the war, the Ford company, like its powerful rival General Motors, thanks to the efforts of major lawyers, got the US government to receive compensation "for damage to their property in enemy territory."

Ford was far from the only American corporation that had a hand in creating the German military machine. By the time of the outbreak of World War II, the cumulative contributions of American corporations to their German branches and representative offices were about 800 million dollars. Ford's investment is 17,5 million, Standard Oil of New Jersey (now existing under Exxon) - 120 million, General Motors - 35 million, ITT - 30 million.

For example, American companies supplied thousands of aircraft engines for the Reich aviation and, most importantly, licenses for their production. For example, the BMW Hornet engines that powered the Junkers-52, the most popular transport aircraft in Germany, were manufactured under license from the American company Prat & Whitney.

General Motors in Germany belonged to Opel. The factories of this company stamped Reich armored vehicles, as well as almost 50% of Junkers-88 bomber power units. In 1943, the German branch of General Motors developed and began producing engines for the Messerschmitt-262 - the first Luftwaffe fighter jet.

IBM has managed to triple its capital during World War II. Much of it was obtained through cooperation with Hitler. The counting machines supplied through the German branch allowed the Nazis to quickly conduct a census of the population of the occupied countries and determine the number of persons to be arrested (the equipment helped to identify even those Jews who had already carefully concealed their origin for several generations). IBM supplied many departments of the Reich with its calculating machines, spare parts for them and special paper, including concentration camps.

Of course, in words, the US government opposed the collusion of American corporations with the Nazis. For example, during the war, the law “Trading with the enemy act” was enacted, which provided for severe punitive measures for such cooperation. But in fact, numerous lobbyists, sent by big-nosed parties to all echelons of power, helped to avoid any obstacles.

American lawyer James Martin, speaking among others against the practice of economic cooperation with the enemy, in his book “The Fellowship of Business” wrote: “In Germany, we were hampered not by German, but by American businessmen. Those who interfered with us acted from the United States, but did not act openly. We were not hampered by any law approved by Congress, not by an order of the President of the United States, or by a decision of the president or any member of the cabinet to change the political course. In short, the “government” did not formally bother us. But the force that hindered us, as is perfectly clear, held in their hands those levers with the help of which governments usually act. In the face of growing economic power, governments are relatively powerless, and this, of course, is not news».

Even after Germany declared war on the United States, a number of major American companies, with the full connivance of the White House, continued to cooperate with Hitler!

Oil Corporation Standard Oil of New Jersey (Exxon) supplied the Nazis with gasoline and lubricants for 20 million dollars. Until the landing of American troops in France, the tanker fleet of "neutral" Spain worked almost exclusively for the needs of the Wehrmacht, supplying it with American "black gold", formally intended for Madrid. Even in the first months of 1944, Germany re-exported 48 thousand tons of oil from Spain every month from Spain.

The same thing happened with another strategic raw material - rubber. At a time when the States were unable to supply their own army with raw materials, particularly synthetic rubber, Standard Oil made a deal with Nazi Germany, according to which the company pledged to supply regular supplies of raw materials, fuel and rubber overseas to Germany, Italy and Austria. As a result, the US army was left with nothing - the supply of the necessary raw materials were painted by the Rockefeller clan 8 years in advance. When the United States entered the Second World War, the American government was forced to negotiate with a fake British office that sold rubber and other necessary resources purchased from German concerns, which in turn were bought from Rockefeller. Thus, when Americans acquired their own raw materials through third parties, Standard Oil received super-profits from both sides.

In 1942, a small scandal broke out in the United States: Standard Oil deliberately reduced methanol supplies for the US Army. Methanol was used to produce lubricants based on natural gas (necessary for aviation when flying at high altitudes), acetic acid (a component of explosives), and synthetic rubber. Finally, in 1943, Rockefellers sold 25 thousand tons of ammonium sulfate (explosive component) and 10 thousand tons of cotton to occupied France, despite the fact that the shortage of these goods was acutely felt in the United States.

And also synthetic rubber and, of course, many spare parts for the aviation and automotive industries, tanks. Of particular value were 1100 tons of tungsten obtained during the war by Germany from the United States. As you know, tungsten was a key component in the production of anti-tank shells and the electronics industry.

Dark история was associated with SKF, the world's largest manufacturer of ball bearings. While giant shipments of bearings (over 600 annually) were shipped across South America to Nazi clients, the Curtiss-Wright aviation corporation, which produced engines for the US Air Force, for a long time did not receive the coveted steel balls from SKF at all. Prat & Whitney, another aircraft engine manufacturer, has also been forced to cut production due to disruptions in bearing supplies from SKF. Due to worn-out parts, planes suffered accidents, people died, some of the new machines could not take off at all, but SKF was only interested in profit, and the Germans paid more.

When 14 in October 1943 was commanded by General Henry Arnold, US Army Aviation Commander, to make an air raid on SKF ball bearing plant in Schweinfurt, Germany, the enemy somehow heard about the operation and managed to prepare the defense, knocking down American aircraft as a result of 60. October 19 Arnold bluntly told the London News Chronicle: "They would not have been able to organize the defense if they had not been warned in advance." Who warned the German branch, I think, to explain too.

Helped American corporations Reich and with military developments. In the midst of the war, the specialists of the US-controlled multinational telephone corporation International Telephone Telegraph worked hand in hand with German colleagues in Switzerland, having an excellent roof from the German intelligence services. One of the shareholders of ITT was Walter Schellenberg, chief of political intelligence of the Security Service. And the head of ITT, Colonel Sostenes Ben, at the height of the war, assisted the Nazis in improving the guided bombs. With the help of such bombs, the Germans barbarously destroyed London, sank and damaged many ships, among which, ironically, were American, such as the American cruiser Savannah.

When the Reichsbank President and Hitler's Minister of Economy Yalmar Schacht were tried at the Nuremberg trials, he recalled Opel’s connections with General Motors and suggested that the captains of the American business should be put on trial. Of course, the proposal was not accepted.

Ctrl Enter
Noticed oshЫbku Highlight text and press. Ctrl + Enter
We are
Tank Lend-Lease. USALend-Lease - the story of the US Soviet military aid
64 comments
Information
Dear reader, to leave comments on the publication, you must to register.