"Circumcision" of the Arab world elite 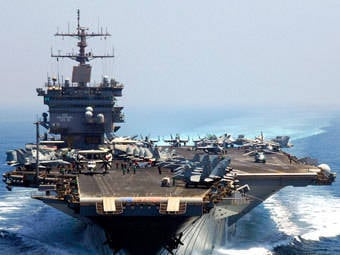 Apparently, the West is ready to go all the way to eliminate Gaddafi. The colonel had too tough resistance to their plans.

There is a replacement of most of the ruling clans in the Arab world, those who catch the wishes of the Western masters, they will save life and part of the capital. The colonel decided to fight for his place - the leader of the people and the revolution, objectively his power was socially oriented. The West threw into the battle proven funds - bribing young people, detachments of "Islamic" militants, media lies, bribed Lebanese politicians, but Gaddafi did not give up and persevered.

He challenged the Western world, so the leaders of the largest Western countries began to talk about the military operation. The US aircraft carriers, frigates of Germany, Canada, were sent to Libya; the ship of England with the SAS fighters had already arrived.

Officially, the possibility of military intervention in the affairs of Libya, said London, does not exclude a private military operation Rome. Come talk about stocks of chemical and biological weapons Gaddafi, which he allegedly can use against civilians.

The European Union and the UN Security Council adopted sanctions against Libya, banning the sale of weapons to Libya, freezing the accounts of political leaders.

The possibility of an operation to eliminate Gaddafi is very large.

- they will destroy the Libyan air forces, which, due to their small size, outdated technology and low combat training, will not be able to resist, will organize a complete blockade of the airspace;

- with further resistance to Gaddafi - a blow to the headquarters, command posts, the physical destruction of Gaddafi.

Navy, Air Force, possibly special purpose groups will be involved. If Gaddafi gives up power, he will be handed over to the opposition, will be tried and executed to remove the witness. The land operation is unlikely, except for individual special operations.

The West is preparing for a new world war, a war for its survival. To do this, it is necessary to change the elite in a number of countries, to plant in its place an even more dependent and obedient one in order to more strictly control natural resources.

For survival, it is necessary to start the process of destruction (“controlled chaos”) in foreign territories, crush them in order to more easily fit into the New World Order. Gaddafi, although he made a lot of mistakes, is currently opposing chaos and destruction in the territory of his homeland, so he will be removed, even by using military force.

Not only the Arab world is under attack - while small ones, unrest occurs in Iran, Turkey, Greece, India, Armenia, in non-Arab African countries, they “warm up” the revolutionary situation in Russia.