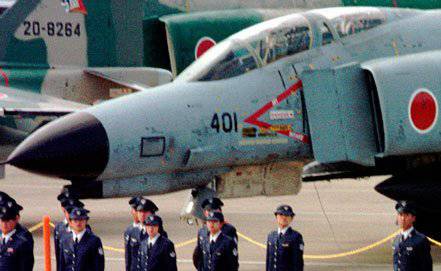 Japan took to the air the F-2 fighters of the national self-defense forces to intercept the aircraft of the Russian Air Force, which flew today over the waters of the Sea of ​​Japan, although there were no violations of the airspace of Japan. This was reported today by the Japanese Ministry of Defense.

According to the defense ministry, the Russian electronic reconnaissance aircraft IL-20 flew over the islands of the Oka and Takeshima / Tokto /, which for many years have been the subject of a territorial dispute between Tokyo and Seoul.

This is not the first such case this year. In late August, the Japanese self-defense air force of Japan flew fighters into the air to intercept two bombers of the Russian Air Force, which allegedly violated the country's airspace.

In Tokyo, noted that this is the first violation of the country's airspace by Russian aircraft since February.

Negotiations of the Foreign Ministers of the Russian Federation and Japan

Today, negotiations are held in Japan between the head of the Japanese Foreign Ministry, Fumio Kisida, and his Russian counterpart, Sergey Lavrov.

Ctrl Enter
Noticed oshЫbku Highlight text and press. Ctrl + Enter
We are
The situation in the south-east of Ukraine. Chronicle of events. 3 MayNews bulletin: the situation around the Senkaku Islands may escalate
50 comments
Information
Dear reader, to leave comments on the publication, you must to register.