Project of the floating tank "Object 911B"

November 5 2013
5
At the beginning of the sixties, the Ministry of Defense of the Soviet Union announced a competition for the development of an infantry fighting vehicle designed for the transportation and fire support of personnel of motorized rifle divisions. Several companies have created their own versions of a promising combat vehicle. The Volgograd Tractor Works presented the “Object 911” project for the competition, the main feature of which was the original wheeled / tracked undercarriage. According to the results of the comparison of the presented prototypes built by different enterprises, the military department chose the “765 Object”, created at the GSKB-2 of the Chelyabinsk Tractor Plant, and the Volgograd “911 Object” was out of work. Nevertheless, the engineers of the Volgograd Tractor Plant continued the development of their project and created on its basis a new lightweight amphibious tank. 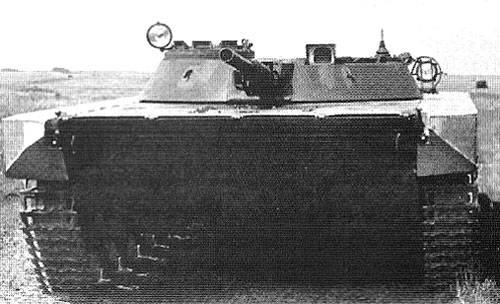 The project "Object 911B" implied the widespread use of groundwork on a wheeled-tracked infantry fighting vehicle, but it was significantly different from it. For example, a new amphibious tank was supposed to have a “classic” tracked undercarriage with six track rollers, a guide and a driving wheel on each side. Moreover, in the floating project tank some original ideas were applied. Of particular interest is the layout of the armored corps. A sealed compartment was provided in front of it, in which a number of systems and assemblies were placed. The main purpose of this compartment was to ensure the buoyancy of a combat vehicle. In the middle part of the hull there was a fighting compartment with crew jobs, including a driver. All units of the power plant were in the stern of the hull.

The volumes of the front airtight compartment made it possible to place in it two fuel tanks, two accumulators, hydraulic cylinders for tensioning the tracks and a water deflector shield. In addition, a part of the ZIP was stored in the compartment. At the same time, there was room for two people in the compartment. It was assumed that the promising tank "Object 911B" if necessary, will be able to assume the function of an ambulance. The front compartment received its own ventilation system, which had to be turned on after landing people.

The layout of the armored hull made it possible to apply several original solutions concerning the body armor. The front hull sheet had a thickness of 10 mm, the sides of the front cargo compartment - 8 mm. The roof and the bottom of the front compartment were made of armor plates 6 mm thick. Frontal parts, behind which were placed only units that have little effect on the survivability of the machine, in fact, served as an anti-cumulative screen for the fighting compartment. The front wall of the habitable volume had a thickness of 35 mm and was assembled from several armor plates. The sides of the fighting compartment were planned to be assembled from two sheets: the top should have a thickness of 45 mm, the bottom one - 20 mm. From below, the habitable volume was protected by a bottom 10 mm thick. Between the combat and engine-transmission compartments provided for two armored plates with a thickness of 35 mm with a fire wall between them. The level of protection of the engine compartment corresponded to the front volume. Thus, the tank "Object 911B" had a kind of armored crew capsule, now considered one of the main features of the tanks of the future.

In the engine compartment of the tank "Object 911B" placed the power unit, created on the basis of the diesel engine UTD-20. 300 hp diesel transmitted torque to the two-shaft five-speed gearbox, distributing power to the tracked or jet propulsion. A relatively compact diesel engine made it possible to reduce the height of the armored hull in comparison with the existing PT-76 tank. In addition, water cannons were transferred from the upper part of the hull to the lower, which in the same way affected the dimensions of the combat vehicle.

As a result of applying the original layout solutions, the floating tank “Object 911B” turned out to be relatively small. With the length and width of the 7,1 and 2,8 body shells, respectively, the prospective machine had a total height of no more than 1,61 meters (at maximum clearance). Overall body height - 830 mm. Such a small height of the tank, as expected, was supposed to increase its survivability on the battlefield, although in some cases it could have a negative effect on the search for targets and aiming. 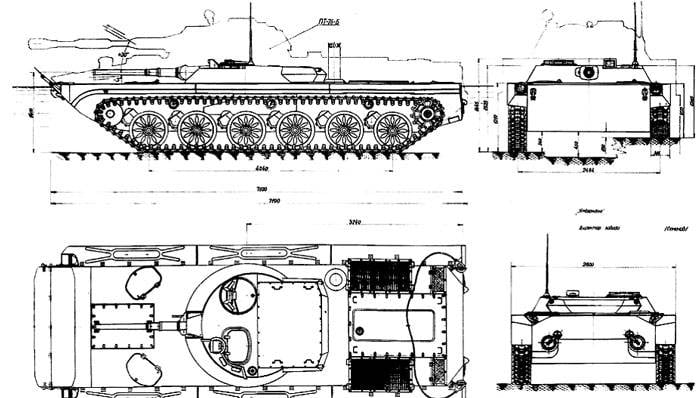 The 911B Object project used a tracked undercarriage designed for the 911 Object BMP. At the same time on the prototype used some elements of the chassis, borrowed from the serial amphibious tank PT-76. The six road wheels on each side of the car had an individual suspension with a pneumatic shock absorber. At the workplace of the driver provided a remote control chassis. With it, the crew could adjust the clearance of the car in the range from 100 to 450 mm, as well as change the roll and trim. With minimal ground clearance, the total height of the “Object 911” did not exceed 1265 mm.

The crew of the “Object 911B” amphibious tank, as was the case with the basic infantry fighting vehicle, consisted of only two people: the driver and the gunner-commander. They were placed in a single fighting compartment. The workplace of the commander was located at the left side of the fighting compartment, the driver - at the right. An interesting feature of a promising tank was the platform on which they installed the driver's seat and machine controls. The platform and a small turret with observation devices, regardless of the angle of rotation of the turret, were constantly in the same position necessary to control the tank. The turntable could also be used for reversing. To do this, at the command of the driver, all control mechanisms were blocked, the platform was deployed to 180 ° and the control lock was removed.

To drive the car during the day, the driver used three TNC-170 periscopic devices, and for driving at night, the central periscope was replaced with a TVN-2B night vision device. Similar monitoring instruments were installed at the commander’s workplace. On a prototype tank observation instruments allowed the commander to inspect only the sector in front of the tower. For a circular view, you had to turn the tower.

The basic one weapons The new floating tank was the 73-mm smoothbore 2A28 Thunder. In one installation with a gun placed PKT machine gun caliber 7,62 mm. For aiming the gun, the tank commander could use hand drives or the Kristal electromechanical system. In both cases, the tank could fire in any direction with an elevation of the weapon from -3 ° to + 30 °. At the commander's workplace, a combined PKB-62 backlight sights were installed (day and night). The main ammunition gun 2А28 was an active-jet shot with a cumulative warhead. With a maximum firing range of about 1300 mm, the Thunder cannon can penetrate up to 300 mm of homogeneous armor. In the aft niche of the tower was placed mechanized laying of the loading mechanism on the 27 shots. Another 13 ammunition was in the styling compartment. The loading mechanism of the tank "Object 911B" had an original design. Inside the feeding niche there was a “chain” of 27 pipes in which the ammunition was placed. With the help of an electric or manual drive, the pipe was brought to the delivery tray, after which the discharging mechanism sent ammunition to the barrel.

For intercom, a floating tank “Object 911B” was equipped with an intercom P-124. Communication with other combat vehicles and the command was supposed to maintain with the help of radio stations P-123 and “Shot-M”. The workplace of the driver for driving a tank in difficult conditions was equipped with TNA-2 “Grid” navigation equipment.

The prospective amphibious tank “Object 911B” was not only small, but also relatively light. Its combat weight was equal to 12,5 tons. Having a 300-strong engine, the car could accelerate on the highway to speed 70-72 km / h and overcome water obstacles at speeds up to 11 km / h. The capacity of the fuel tanks ensured a power reserve of 500 kilometers.

In 1964, the Volgograd Tractor Works built the only prototype of a promising amphibious tank. During the tests, the “Object 911B” showed high running and fire performance. In terms of a number of parameters, it was superior to the existing PT-76, but several features of the new project had a negative impact on its future fate. It is noteworthy that the original loading mechanism and the turntable with the driver’s mechanic’s workplace interested the military and did not cause any special complaints.

According to some data, the future of the new amphibious tank was determined due to its running characteristics and an armament complex. The floating tank "Object 911B" in a number of parameters resembled the newly created infantry fighting vehicle BMP-1 and, as it was then considered, had no advantages over it. The floating tank and the infantry fighting vehicle had a similar level of protection and mobility, and were also equipped with an almost identical armament complex. In this case, the BMP-1, in contrast to the tank, could carry troops, which determined the choice of the military. The prototype tank "Object 911B" was tested, after which the project was closed. The armored vehicle is now located in the Kubinka Museum of Armored Vehicles.

Ctrl Enter
Noticed oshЫbku Highlight text and press. Ctrl + Enter
We are
Light amphibious tank T-41Project wheel-tracked tank A-20
5 comments
Information
Dear reader, to leave comments on the publication, you must to register.