Intelligence genius who turned out to be unnecessary to the Motherland 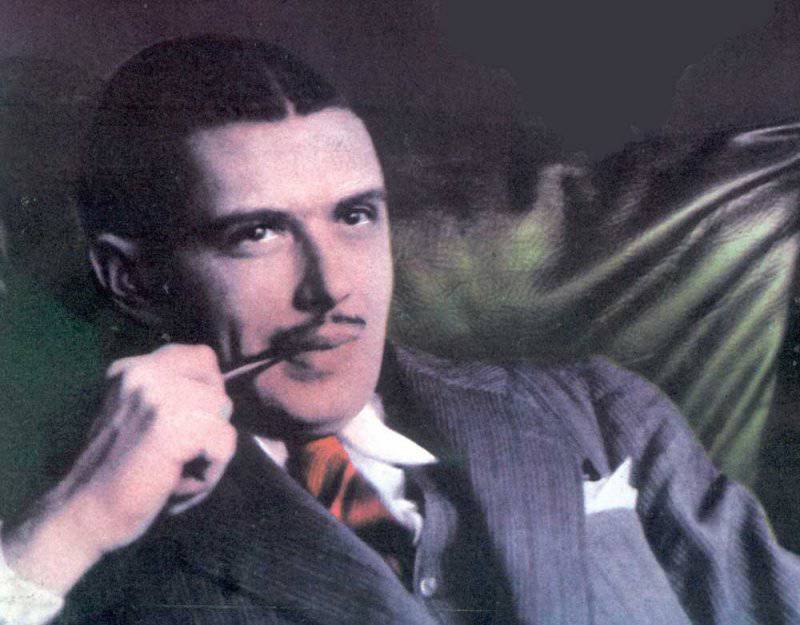 Call the best Soviet intelligence is impossible. But all researchers in the top three always include Dmitry Bystroletov. Until now, the information obtained by him in the 30-ies, constitute state secrets and are of the highest degree of secrecy. In the International Museum of Intelligence (Washington, USA), a separate stand has been allocated to Bystroletov. What is famous Soviet intelligence?

Dmitry Alexandrovich Bystroletov was born in 1901 in the village of Ak-Chor in Crimea and was the illegitimate son of Count Alexander Tolstoy, the elder brother of the famous writer A. N. Tolstoy. Until 1913, Dima lived and was raised in St. Petersburg in the family of his father’s close friends, where he received an excellent home education and upbringing. The typical fate of the extra-marital offspring of high-ranking officials and well-born nobles was military service. Property and titles were given to legitimate descendants, and bastards, at best, could expect to receive education and patronage at the beginning of their careers.

Following the already established order, Dmitry entered 1913 in the year of the naval cadet corps in Sevastopol and even managed to get to the First World War, the Turkish theater of military operations. In 1917, the earl recognized paternity (the rarest of cases), and Bystroletov was introduced to count dignity. But Dmitry didn’t see Pierre Bezukhov’s fate. The October Revolution abolished the estates and civil ranks with a special decree. The lush earl title bystroletov wore just 5 days.

The revolution has covered Bystroletova in the Crimea. A graduate of the nautical school enlisted in the Volunteer Army and served as part of its naval forces. But the service did not last long. Without serving a year, Bystroletov deserted and fled to Turkey. In 1920 he returned to the already Soviet Russia, and in 1921 he again crossed over to Turkey. Such convulsive throwing from one camp to another was not uncommon at that time. A lot of young people, before finally deciding on their choice, managed to make war between the whites and the reds, and in the “armies” of all sorts of tales and atamans.

In Turkey, Dmitry hired as a sailor and, hurting himself literally in everything, he saved money for moving to Europe. In May, 1923 got to Prague, then one of the centers of Russian emigration, and entered Charles University at the Faculty of Law.

Student Bystroletov quickly became known for his pro-Soviet sentiments, which he constantly demonstrated with maximalism inherent in his youth: he achieved Soviet citizenship, became secretary of the local branch of the Union of Students-Citizens of the USSR. The Prague newspapers often flashed his name, and even raised the issue of his expulsion from the country.

In the service of the USSR

Of course, the Soviet residency could not help but pay attention to the active young man, a supporter of the USSR. The recruitment took place without problems: if the Motherland needs him, if he can be useful to her, he is ready to serve Soviet Russia. He was given a job at a Soviet trade agency (this removed the question of his deportation). The first assignments consisted in viewing newspapers, and in finding information in this sea of ​​information of particular political, economic, and technical interest.

The level of difficulty of the tasks gradually increased. In 1925, a student of Bystroletov arrived in Moscow at the first congress of proletarian students as a delegate from the Union. He returned to Prague as a full-time employee of the Foreign Department of the OGPU, who was in charge of foreign intelligence.

Bystroletov became a recruiter. Documents, legend, "roof" - all this is aimed at hiding the true essence of the scout. The recruiter must constantly open in front of the "object". Misses, mistakes are unacceptable. A recruiter, like a sapper, is mistaken only once. Failure to recruit automatically leads to the failure of the scout. A state secret carrier who has broken the hook must immediately inform the relevant authorities about his contact with a foreign intelligence agent - this is an axiom. Hiding the very fact of a recruitment attempt (even unsuccessful) is already a crime.

Bystroletov began his work with the involvement of engineers and technical workers of the Škoda concern. Soon among his agents appeared representatives of business and financial circles. His professionalism was gradually honed, the value of the agents he recruited grew.

"Between times" Bystroletov graduated from the university, defended his thesis and received a doctorate in law.

In 1929, after 4's years of work “on the bodies”, Bystroletov collects the suitcases: he goes to Moscow. Behind him has already reserved a place in the Institute of the monopoly of foreign trade. Suddenly Golst comes to him - a resident of the Soviet intelligence in Czechoslovakia: “Dmitry, they transfer me to Berlin. You will go with me? Illegal? Think back tomorrow. ” Bystroletov not tormented by choice. All the cards were in favor of returning to Moscow. But in the morning, when Holst entered the room, he unexpectedly answered himself: "Yes."

Began a series of endless transformations. The haughty English lord, the cheerful dobryachk the Hungarian count, the Canadian engineer constantly immersed in mathematical calculations, the enthusiastic Dutch artist, the successful Brazilian businessman, the ruthless American gangster - masks varied depending on a situation and a task. His reincarnations were absolute. Bystroletov learned secular manners and learned to shoot without taking his hands out of his pockets. It rotated among financial and industrial aces, in a circle of bohemians and in night taverns among port dockers and porters.

Bystroletov became a specialist in obtaining secret ciphers and documents. He obtained the codes and codes of Germany, England, Finland, Italy, France, received secret documents from the US Department of State, had access to personal correspondence between Mussolini and Hitler. The agents he recruited include employees of the British Foreign Ministry, the French General Staff, officials of the foreign embassies of Italy, France, Czechoslovakia, and England.

An illegal scout rose to the highest spheres, and the British Foreign Secretary personally issued a diplomatic passport to “Sir Robert Grenville”, the second son of an English lord permanently residing in Canada, to an aristocrat in the seventh generation.
Dumas is resting!

At the same time, “on the job,” Bystroletov, under a foreign name, was trained at the University of Zurich at the Faculty of Medicine, defended a thesis, and in 1936 he received a doctorate in medicine degree.

No need to imagine the life of an illegal scout as an endless series of pleasant adventures. Every day of life under a false name brings the hour of failure. As early as July 1933, the resident foreign intelligence agent sent a radiogram to the Center stating that Andrei (pseudonym D. Bystroletova) is on the note of several foreign special services and can be eliminated at any time. The answer came from Moscow: "We all understand ... Priceless information ... Have a little more time ... the Motherland asks ... the Motherland will not forget ..." And Andrei has been walking along the edge of the abyss for three more years.

In December, 1936, Bystroletov himself asks the center to recall him: he is 17 years abroad, 11 is in intelligence, of which 6 is in an illegal situation, he is tired, he is on the verge of a psychological breakdown, he wants to go home to Russia.
At the beginning of 1937, Dmitry Bystroletov, after many years of wandering in a foreign land, finally returned to his homeland.

How "not forgotten" Motherland

Bystroletova met as a hero. He was personally thanked by the people's commissar Yezhov. Yesterday’s illegal, with his invaluable experience, became an employee of the central office, took part in creating the first textbook in the USSR for future intelligence officers. Bystroletov represent the rank of lieutenant of state security, and he is about to become a member of the CPSU (b).

It was the highest point of take-off, the fall began. In February, Bystroletov's 1938 was fired from the staff redundancy unit, and in September they came for him. During interrogations, his skull was broken, his ribs were broken, his abdominal muscles were torn with his boots. 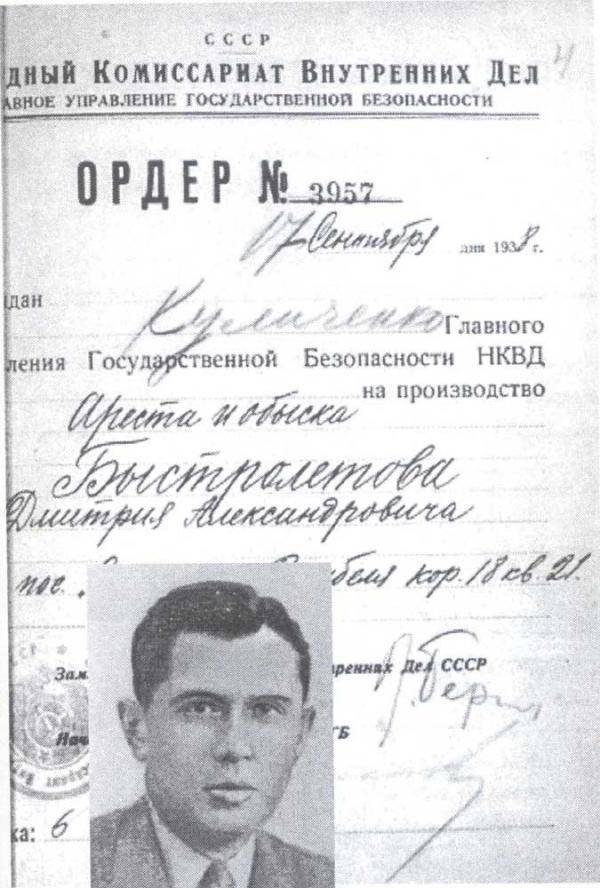 His wife, Milena Iolanta Shelmatova, a Czech intelligence officer, after learning of her husband's arrest, committed suicide, beating the visit of NKVD officers for just a few hours.

With a verdict from 8 in May 1938, the pride of Soviet intelligence, which the State Security Commissioner recently kissed publicly, received 20 years of camps and 5 years of exile, or, as they said, “20 - in the teeth and 5 - in horns”.

The kaleidoscope began again. Only if earlier the scout "Andrew" changed cities, then now the convict of Bystroletov changes camps: Norillag, Kraslag, Siblag. In 1947, he was remembered, transferred to Moscow and taken to Lubyanka, directly to the office of the USSR Minister of State Security. Abakumov offered the prison to Bystroletov amnesty and work in the apparatus of foreign intelligence. On a tempting offer who had 8 over the years of the camps (and 12 also - ahead), the convict replied: “To me amnesty need not. An indispensable condition for my return to intelligence is complete rehabilitation. ” For such an answer, Bystroletov received from the omnipotent minister a “correction” of the sentence in the form of 5 years of solitary confinement in a special prison — the famous Sukhanovka.

After the 3 years of torture, loneliness was half-blind, with impaired mental health. Bystroletov was released. No, not to freedom, but back to the camp.

In 1954, he was released for health reasons (activated), and in 1956 he was rehabilitated "for lack of corpus delicti." Like this!

"A man in civilian clothes"

Dmitry Aleksandrovich has lived almost another 18 years. After graduating from 2 University, LL.D. and doctor of medicine, who speak 22 languages, Bystroletov worked as a consultant and translator at the Research Institute of Medical Technology. He left a grandiose work about his life - a multivolume epic work “The Pir of the Immortals”, which is a rarity among scouts. Died 3 May 1975 of the year.

Dmitry Alexandrovich Bystroletov, one of the best illegal intelligence officers (many consider him to be the best), has never been a member of the party or even received a military rank. All his life he remained a “man in civilian clothes”.

In the articles about his biography in the “awards” section there is only one entry: 1932. weapon "For the merciless struggle against counter-revolution." Has no other awards.

Ctrl Enter
Noticed a mistake Highlight text and press. Ctrl + Enter
We are
Burt Rutan - Aircraft GeniusThe Adventures and Transformations of Dmitry Bystroletov
44 comments
Information
Dear reader, to leave comments on the publication, you must to register.