Ithaca M6: "combination" for the survival of the pilot

November 5 2013
45
Many rightly believe that firearms weapon armored vehicles, pilots and others is a secondary weapon and in most cases absolutely useless, since it is often sacrificed for the sake of reducing the size and weight. However, among such samples you can find quite interesting models of weapons, which turned out not as a result of the “castration” of normal samples, but as a result of the work of designers “from scratch” and with clearly defined tasks. One example of this is the American survival combo gun. Immediately it should be noted that a similar project existed with us, albeit a little later, but the result galloped the potential enemy seriously, well, in my opinion. But we will discuss a domestic sample in another article, but for now let's deal with what was offered to US pilots in case of an emergency landing far from civilization.

The full name of the sample is Ithaca M6 (survival weapon). The appearance of the weapon is such that it seems as if it was assembled on a knee in some kind of basement, but this is only an external impression. In fact, excessive asceticism of weapons is a deliberate and balanced decision of designers to reduce the size and weight of weapons, well, and ryushechki - this is superfluous. Externally, the weapon is a “tipping” with a vertical arrangement of short trunks. In order for the device to occupy as little space as possible, the butt rotates 180 degrees and locks under the barrels, thus the chambers in the folded position remain open, which is not good, in my opinion. In the butt of the weapon are 4 shotgun shells and 9 ammunition for rifled barrel. Not much, but better than nothing. Aim devices consist of reversible rear sight and front sight. The rear sight is designed for firing from a smooth trunk at a distance of 20-25 meters and from a rifled distance to 90 meters. To make a shot, you need to press a large enough key that is not covered with anything. On the one hand, this seriously reduces the safety of the weapon, on the other hand, it allows you to shoot even when the hand is injured and mobility is reduced, well, or when the hands are protected with very thick mittens. On a large trigger there is a switch with the help of which the selection of the barrel from which the shot will be made. The upper barrel of the threaded apparatus, the .22 caliber, the chamber, is designed for the .22 Hornet cartridge. The lower barrel is smooth, chambered for .410. Standard ammunition for weapons equipped with a fraction number XXUMX. 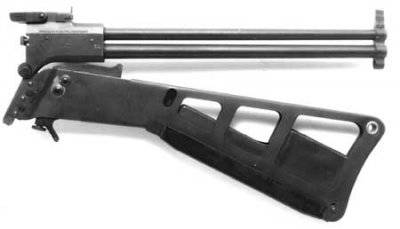 It is easy to guess that this unit is designed only to enable the pilot to shoot himself something for dinner. Apparently, in case of meeting the pilot with the bear, he was recommended to smear the face of the bear, well, and than to smear, the pilot found out when he met a bear. In the event of a meeting with an armed opponent, even shooting oneself from the first shot could not work. In general, the device turned out to be quite good for hunting small animals, but it is not adapted for anything else.

The total length of the weapon is 718 millimeters in the unfolded position, with a folded butt length equal to 381 millimeters. The length of both barrels is 335 millimeters. Weight together with ammunition is 2,06 kilogram.

Due to the fact that the device showed itself as far from the most suitable for the tasks that confront a person when trying to survive in the wild, and even more so for survival on the territory of the enemy, the device was removed from service, but soon appeared on the market weapons. Naturally, no one left it in its original form, the trunks were extended to 400 millimeters, and the cartridge chamber for the rifled barrel became shorter for the .22LR or .22WMR cartridges.