November 5 2013
49
At the end of October, in the Kaliningrad region, a regular retreat of the Government’s Military-Industrial Commission was held. The theme of the event was the renewal of the material part of the entire naval fleet Russia in general and the Baltic Fleet in particular. In addition, during the meeting, another important issue was raised regarding the combat effectiveness of the coastal forces of the Navy. Several officials expressed concern about the problems of the Marine Corps, which adversely affect its combat effectiveness. 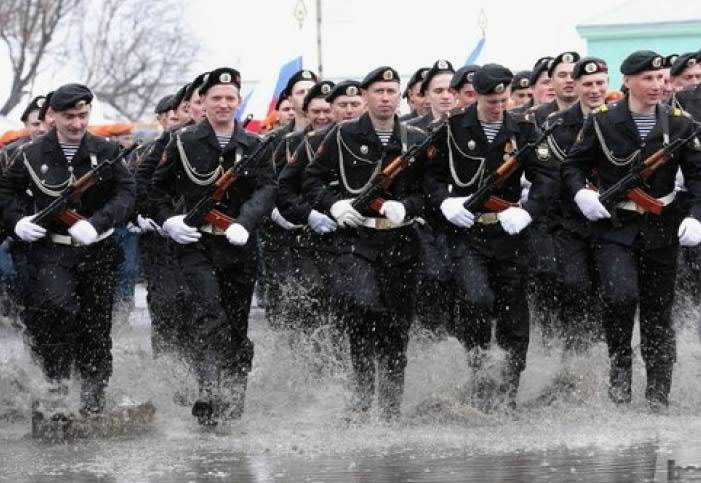 The main problem of the Russian marines - lack of funding. State Duma deputy and head of the defense committee V. Komoyedov, from 1998 to 2002, was the former commander of the Black Sea Fleet, he believes that to correct the situation with the state of the marines, you need to apply a new approach to financing. Money for this type of troops should be allocated in accordance with the needs and requirements, and not on the residual basis, as has been done in recent years. It is precisely because of the lack of money that the marines currently do not fully have modern weapons and equipment, as well as communications and control systems.

Touching on the topic of the state of the technology park, V. Komoedov cited floating as an example Tanks. Despite the specifics of the tasks performed, the Russian marines do not have equipment of this class. Old amphibious tanks (PT-76, created in the fifties) are long outdated, and the development of new vehicles for this purpose stopped several decades ago. A similar, but less deplorable situation develops with the technology of other classes. According to Komoyedov, the Marine Corps needs new floating armored personnel carriers and other equipment.

At present, the Russian Marines have equipment of the same types that are operated by ground forces. These are T-72 and T-80 tanks of several modifications. According to some reports, the Marines have a small number of T-90 tanks. For the transportation of personnel used armored personnel carriers BTR-70 and BTR-80, as well as infantry fighting vehicles BMP-2 and BMP-3F. There is information about a number of surviving BMP-1. The total number of armored vehicles does not exceed 350-400 units.

In accordance with the current state armaments program, up to 2020, the share of new weapons and military equipment in the Russian army should increase to 70%. At the same time, as is clear from open data, no major steps are planned over the next few years to rearm the coastal forces of the Navy, which include the marines.

Nevertheless, there is already some progress in this direction. At the end of June 2013, the Ministry of Defense published information about the tender, the result of which should be the creation of a new combat vehicle. The research and design work on the theme “Marine Combat Vehicle” (BMMP) was allocated to organizations participating in the project for several months. The first results of the project can be announced as soon as possible. From the available data it follows that by the end of this year, the organizations involved in the project should form the image of a promising combat vehicle. Thus, the construction and testing of the prototype will begin no earlier than next year. On the timing of the start of serial construction BMMP, for obvious reasons, too early to say.

The second project of direct relevance to the marines is the construction of two amphibious helicopter-carrying dock ships (MFDD) of the Mistral type. By joining the Russian Navy, the Vladivostok and Sevastopol DVKD will complement the existing amphibious ships, which will correspondingly affect the mobility and, consequently, the combat potential of the marines. New ships are planned to be part of the Pacific Fleet in 2014 and 2015. In the future it is possible to build two more landing ships of the same project.

As you can see, in the framework of the current State rearmament program, active work is under way that directly relates to the development of the marines. Nevertheless, it should be noted that the development of a special combat vehicle and the construction of two new ships will not have the desired effect on the state of the marines and coastal forces of the Navy as a whole. In addition to landing ships and combat vehicles, the Russian marines require new tanks, equipment and weapons, communications systems, etc.

The result of the meeting of the Military Industrial Commission was a report and a letter to the Minister of Defense. In the latter, commission members ask the head of the military department to pay attention to the condition of the fleet of coastal vehicles. Defense Minister S. Shoigu has not yet commented on the situation with the state of the marines.

Ctrl Enter
Noticed oshЫbku Highlight text and press. Ctrl + Enter
We are
Update the Russian Navy. In the gland. Part of 1The flag is hoisted on the nuclear submarine Severodvinsk!
49 comments
Information
Dear reader, to leave comments on the publication, you must to register.