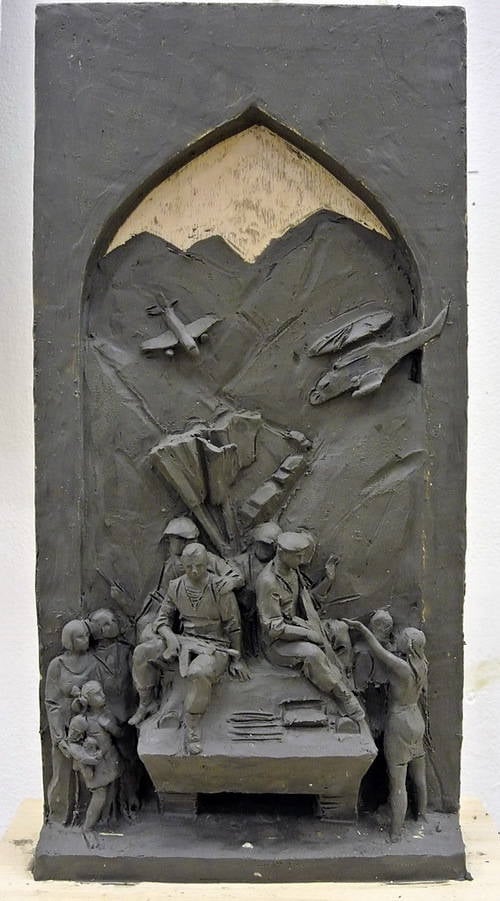 The competition jury of architects, officials and public figures decided on the draft memorable sign 25 anniversary of the withdrawal of Soviet troops from Afghanistan. The sculpture by Vyacheslav Manachinsky, the author of the figures on the facade of the Gallery shopping mall and the sculpture “The Birth of Petrozavodsk”, will be installed in the Park of Military Glory 1 in March 2015.

Summing up the competition took place on October 31 in the exhibition center of the St. Petersburg Union of Artists. According to the project, the memorial sign is made in the form of an arch, in the middle of which there is a high relief depicting a mountain of Afghanistan and a winding road with returning Soviet troops. The monument must be made of bronze and granite and reach a height of 7 meters. However, the jury advised to reduce the height of the monument to 5 meters, told the committee on urban planning and architecture.

During 14 days, this project should be submitted for consideration to the working group of the City Council on monumental-decorative, artistic, information and advertising design, integrated improvement of the urban environment of St. Petersburg. In total, 24 of the author took part in the competition, 10 projects of a memorable sign were submitted. In addition, the Union of Artists held the first round of competition for the production of a monument to the dead 6 soldiers of the 2 company of the 104 battalion of the Guards Parachute Regiment of the 76 (Pskov) Airborne Division. A total of 16 projects were presented. The second round will take place before 1 March 2014.

The jury included 14 people, including the first deputy chairman of the KGA Yury Mityurev, head of the aesthetics of the urban environment of the KGA Ksenia Danilova, deputy of the Zaksa Igor Vysotsky, vice-president of the Union of Architects of St. Petersburg Svyatoslav Gaykovich, and the father of the commander of the 6 platoon who died in Chechnya Pskov Airborne Division Sergei Kozhemyakin and representatives of public organizations of war veterans.

Ctrl Enter
Noticed a mistake Highlight text and press. Ctrl + Enter
We are
Day of Military Glory of Russia - the day the counter offensive began in the Battle of MoscowIn the Ivanovo region opened a memorial memorial in honor of the designer of tanks
5 comments
Information
Dear reader, to leave comments on the publication, you must to register.