The law - in the gun! The police regulated the sale of weapons 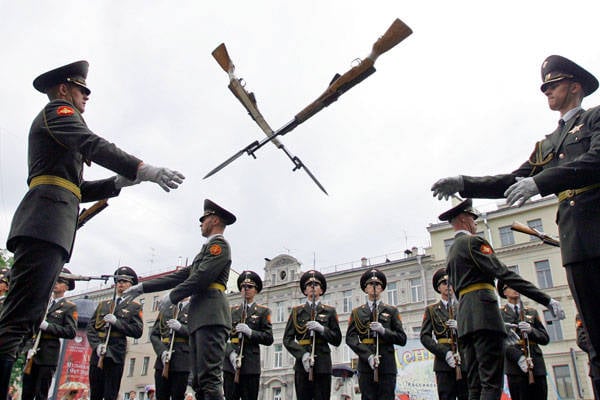 THIS ARTICLE IS A COMMENTARY TO:


Sell ​​civilian and service weapon and ammunition to it is possible only after performing a considerable number of procedures that the police require for trade in barrels and blades.

The new order of the Minister of Internal Affairs of Russia, Vladimir Kolokoltsev, which today publishes Rossiyskaya Gazeta, complements and specifies the weapon legislation. On the one hand, increased control over the circulation of weapons. On the other hand, all participants in this market are becoming aware of the rules of the game - what is possible, what is impossible and where to complain.

And this market by the number of trunks is comparable with the army arsenal. According to the Interior Ministry, there are over five million registered firearms in the hands of citizens. In addition, about two million traumatic pistols and revolvers have been sold - no one knows the exact number.

And, according to experts, almost as many unregistered weapons. Russian police are looking for more than 220 thousand guns, of which 70 thousand are rifled. The lost or stolen weapon file has been maintained since 1947. Since then, over 160 thousands of units have been found.

Russia is in ninth place in the world in the number of armed people.

We have every tenth owns a "gun". For comparison: in the US, out of every 100 residents owns weapons 90 people. On hand - 150 of millions of very different shooting units. In Germany, for every 1000 people own 120 weapons, in Finland - 400. In Japan, the population is less than one hundredth of a percent, and in Switzerland it is literally a universal one: every military liable there, as a member of the national militia, keeps an automatic machine at home.

Of course, the most armed city of Russia is Moscow. One-third of all weapons held by citizens — official, sporting and so-called civilian — are in the hands of the residents of the capital. Registered in Moscow are more than half a million owners of civilian weapons. That is, owners of hunting smooth-bore and rifled guns and carbines, gas and traumatic pistols. On hand there are 627 920 trunks. The annual increase in the armament of the people is five percent.

Almost half - 239 410 people - the owners of weapons of self-defense, that is - guns. Here they make up the biggest headache for the police. It is very important that the owners of guns and carbines practically do not appear in the criminal reports - such trunks do not carry with them every day and, as a rule, do not shoot them at drunk. But all sorts of pistols and revolvers are used for any reason: in a domestic brawl, in a restaurant and even in an accident. Other artists sometimes earn their popularity just by “makarychem” or, say, “pre-fishing” - there are precedents.

But even more often the most banal violations occur. People just forget pistols in the most inappropriate places: in the glove boxes of cars, shopping bags, in the cloakrooms of restaurants or theaters. It is clear that there are "trunks" and steal. And then converted into fighting and killing people.

Therefore, the Law "On Weapons" has recently been amended, seriously limiting the rights of the owners of the stealth carriers. If, say, a hunter can own six weapons, the “self-defense” can only be two.

Moreover, the hunters in the renewal of a license for a weapon show only the entire required package of documents. And trauma owners will have to pass tests every time. And if it suddenly turns out that the owner of a beautiful pistol does not know the legislative rules for its use and, moreover, does not know how to shoot him, then he will have to part with the “gun”. Or - to study "military".

Another significant change in the law: the concept of "traumatic weapon" no longer exists. There are "firearms of limited defeat" - a pistol, a revolver, a firearm of domestic production with traumatic cartridges. This change made some confusion in the arms trade process: not all specialty stores managed to change the requisites on the goods, and the owners of traumatics - to alter the permissions. By the way, the regulations published today take into account these changes and enable weapons dealers to issue licenses correctly.

Proponents and opponents of the right for ordinary citizens to acquire short-barreled firearms - we are talking about combat pistols and revolvers - are increasingly breaking spears. The reason for the resumption of the discussion, as a rule, becomes another skirmish or slaughter both in Russia and abroad. Particularly impressive when some madman shoots people from legally acquired barrels and the same legal ammunition.

Several years ago, on the wave of interest in the weapons issue in Russia, a kind of compromise was made: the sale of pistols and revolvers was allowed, but traumatic, that is, the shooting of which should not lead to deaths. However, the number of those killed from "non-lethal" weapons is already in the tens. And cases of its use - hundreds. Drivers who have not divided the road, visitors of nightclubs and restaurants, raiders and simply hooligans are shooting at each other. What will happen, exclaim opponents of the legalization of "short-barrels", if you allow real guns?

And everything will be fine, argue supporters of weapons. After all, there are practically no facts when crimes were committed in Russia using registered smooth-bore and rifled hunting weapons. Why should they appear with the permission of the pistols? And the trauma patient doesn’t count, people really don’t consider him a military weapon. It is thought that a shot from it is the same as a punch. After all, the hand can be crippled and even killed.

To strengthen control over the circulation of weapons, the order of the head of the Ministry of Internal Affairs specifies the requirements for trade in everything that shoots. It immediately catches the eye that only a legal entity can trade arms. An ordinary citizen has the right to hand over weapons, including for remuneration, only to the police.

The document lists in detail where the entrepreneur should go, what documents to collect and submit in order to legally sell shooting and piercing-cutting objects. The specific actions of the licensing officials are indicated, addresses are given where to complain, and even mandatory reactions to possible complaints are spelled out. The most important thing here is a public presentation of the document that pursues frankly anti-corruption goals. For this purpose, for example, specific terms are given, which are given for one or another action of the employees of the Ministry of Internal Affairs.

And how are they

In the US, the process of buying any weapon can last - depending on the state - from 15 minutes to a month. The shop makes a request to the police about the identity of the buyer - and the result is whether or not the barrel is sold or not. As a rule, a positive decision is made in 95 percent of cases.

In Europe, in order to acquire a civilian or hunting weapon, you need to perform roughly similar exercises: get trained, have positive characteristics, get permission from the police. The difference is in terms and specific requirements. For example, in Germany, not pistols, but pump-action guns are prohibited for sale - the police call them “classic weapons of criminals”. Openly carrying any weapon, including pneumatic, cold or stun gun, is prohibited. In France, the sale of any automatic weapon is prohibited. In the UK, a separate license is needed for a pistol, a different license for a long-barreled weapon. In Japan, they will give permission to purchase only after a one-year course of study. Will teach shooting and knowledge of the laws. Buy allow only smooth-bore gun or a single-shot rifle. On the pistols we are not talking at all. And they will check the owner every three months.

Ctrl Enter
Noticed oshЫbku Highlight text and press. Ctrl + Enter
We are
On CES 2013 showed a Linux-gun for 17 000 dollarsSecret submarine base for sale
127 comments
Information
Dear reader, to leave comments on the publication, you must to register.