November 1 2013
23
Rumors about Russian citizens, with weapons in the hands of the speakers in the Syrian conflict on the side of Bashar al-Assad, turned out to be true. Fontanka was convinced of this by checking information about the deaths of Russians who allegedly went to war under a contract with a Hong Kong company. The surprise is that St. Petersburg turned out to be the recruiting center, and the Russian mercenary killed in Syria on the 9 day turned into a living fighter of a private security company. 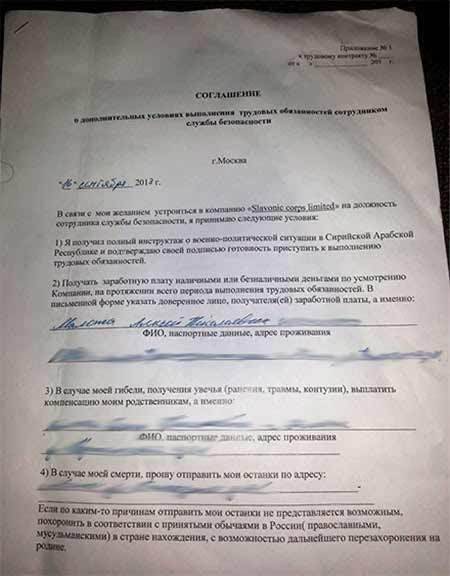 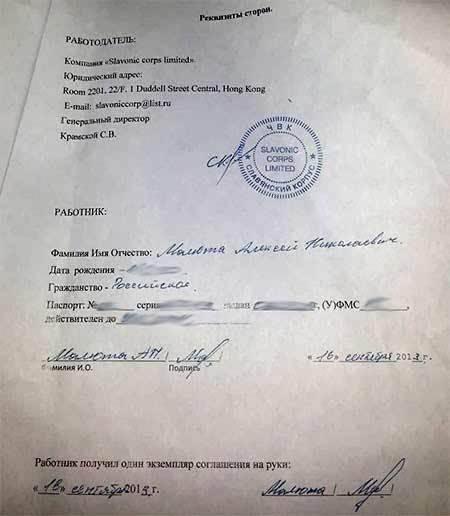 In the last decade of October, a number of foreign and Russian media reported that Russian mercenaries were fighting on the side of Bashar al-Assad in Syria. The Mujahideen of the Islamic State of Iraq and Sham reported on a successful attack on the “kafir” in the province of Homs, during which about 100 enemies were destroyed. According to the rebels on their network resources, among the dead were several soldiers from Russia, the name of one of which was reliably established - Alexey Malyuta from the city of Abinsk, Krasnodar Territory. In confirmation, photos and documents were published showing the involvement of Malyuta in the security consortium of Moran Security Group, and his contract with Hong Kong private military company Slavonic Corps Limited. 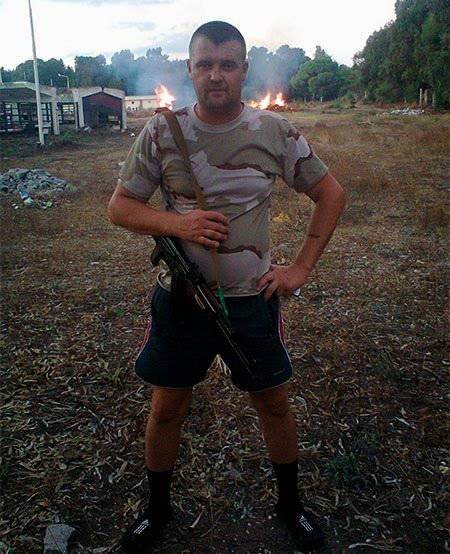 The American television channel TheBlaze wondered about the number of Russian mercenaries in Syria. The Ukrainian press was outraged by the silence of the incident in the Russian press. At the same time, commentators doubted the accuracy of the information, noting that the contracts do not look like real ones and resemble falsification.

Moran Group: we have nothing to do with it

The certificate of Moran Security Group, allegedly taken from the corpse of a murdered mercenary, suggested the simplest path. 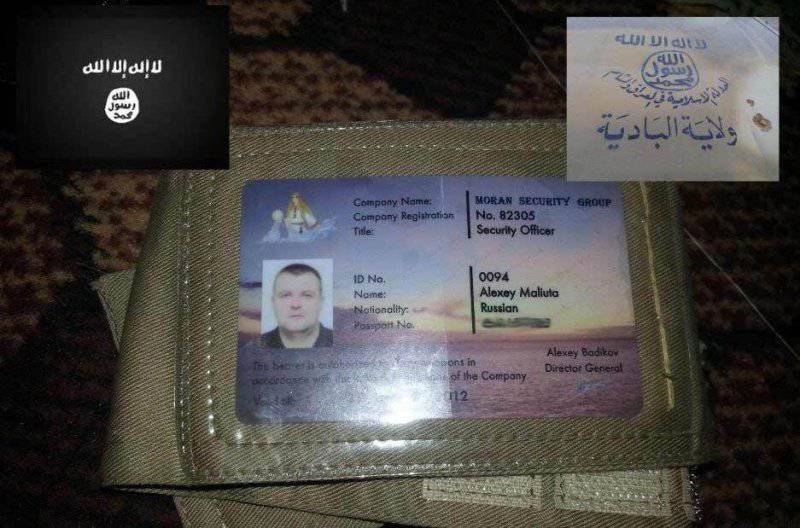 Correspondent "Fontanka" contacted the representative of the company. Contacts of managers of a security company known in Russia and abroad were in the editorial office; over the past year, journalists have been in constant communication with them. Recall that in October 2012, in Nigerian Lagos, the local naval forces seized the security vessel Myre Seadiver belonging to the Moran Security Group, whose crew was completely released only in October 2013, the fate of our seamen was interested in “Fontanka”. 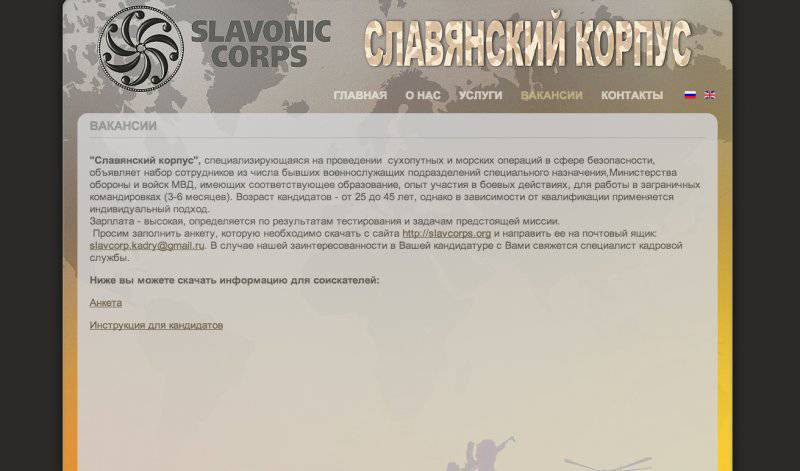 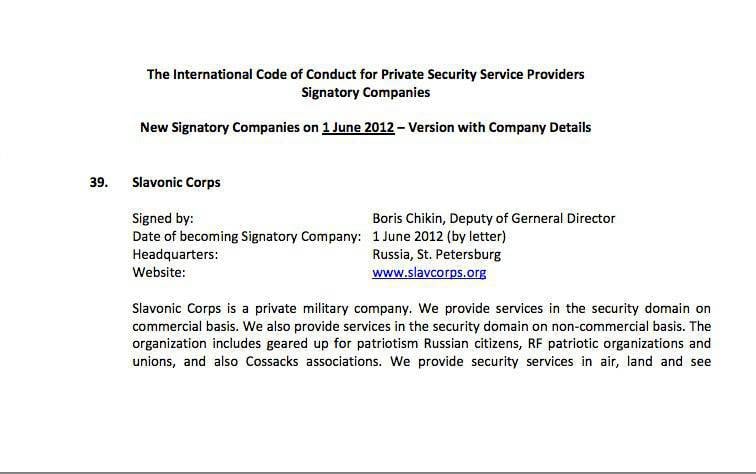 One of the leaders of the Moran Security Group, Alexey Badikov, whose signature is on the certificate, explained that Alexey Malyuta really worked for the company in 2012 and the beginning of 2013, participated in operations to protect vessels from the threat of pirate attacks, but then quit. Hong Kong Slavonic Corps Limited has no relation to Moran Security, Moran Security does not carry out activities in Syria.

Attempt to contact the Slavonic Corps (“Slavonic Corps”) instead of Southeast Asia led to the banks of the Neva. Although the company was registered on 18 in January of 2012 in Hong Kong, Sergey Kramskoy, permanently residing in St. Petersburg, is listed as its head. It is easy to establish that Sergey Kramskoy is headed at once by two St. Petersburg LLCs with the name “Slavic Corps”, established in January and April of 2012. The only founder of both companies is St. Petersburg-based Sergei Soharev. Correspondent "Fontanka" found his phone number.

- Tell me, please, are the Slavonic Corps LLC owned by you somehow connected with the Hong Kong Slavonic Corps Limited, which sends mercenaries to Syria, or with the Moran Security Group?
- No, not related. Why do you think so?
- We assumed that they may be related, since these companies with the same name are headed by the same person, Sergey Kramskoy, and they were established at about the same time. In addition, as reported by the Syrian rebels, the mercenary-Russians discovered the identity of Moran Security.
- No connection. I do not know anything about Hong Kong, and Kramskoy has already been dismissed from Slavic Corps LLC. Slavyansky Korpus LLC itself is my own project, not connected with Syria or with the Moran Group.
- You can tell the phone Sergey Kramskogo?
- Well, I don't know, I have to ask the president, Vyacheslav Vasilyevich ...
- Do you mean Vyacheslav Vasilyevich Kalashnikov, president of the Moran Security Group?
- Yes.
- So “Slavic Corps”, Kramskoy and Moran Security Group are somehow related?
- No.

In order to clarify the conflict, Sergei Soharev offered to meet in person the next day and promised to call back. Not yet called back.
By telephone "Slavic Corps" listed on the organization's website, no one answered. On the same site was a description of the activity: “The private military company“ Slavic Corps ”was created by professional military officers, reserve officers, who have a great practical combat and team experience ... only in the“ Slavic Corps ”are stock officers, professionals of the highest quality, who possess unique military professions, as well as having work experience in Iraq, Afghanistan, East Africa, Tajikistan, the North Caucasus, Serbia, etc. ”

After reviewing the IcoC site, the journalist was convinced: the code was indeed signed by Slavonic Corps Limited 1 June 2012.

Boris Chikin is a famous man. Petersburger, one of the best experts in practical shooting, the author of the methods of training bodyguards. And one of the founders and leaders of the Moran Security Group. Boris Chikin answered the call of the correspondent.

- Boris Georgievich, can you explain to us what the company Slavonic Corps Limited does?
- I have absolutely nothing to do with this company.
- But don't you hold the position of Deputy General Director of Slavonic Corps and did not sign the International Code of Conduct for Private Security Companies on June 1?
- There was some weird история. I was asked to do it, well, that's all. Neither I nor Moran Security Group have any relation to the activities of the Slavic Corps.

Fontanka has no reason to doubt the truthfulness of Boris Chikin’s words. In the end, the fact that Slavyansky Korpus LLC is registered at: Alexander Blok Street, 5, in the house of the Baltic Shooting Center, which is called by Boris Chikin as head of reference sites, may be an accident. As well as the almost literal coincidence of the job descriptions of the Moran Security Group and the “Slavonic Corps” on specialized sites.

Sergei Kramskoy managed to remain elusive. Our interlocutors at Moran Security reported that such a person, although not working for the company, is known to them, they saw him and talked to him, but no one has his phone. Sergey Sokharev, who, according to the Unified State Register of Legal Entities, is the sole owner of the companies headed by Kramsky, did not find his telephone either. The author of the site “Slavic Corps” did not disclose the coordinates and name of the customer to the journalist. The head of the personnel agency "AV-Group", who recruited recruits for the "Slavic Corps", explained that he had a phone number of Sergey Kramsky, and promised to share them. I asked to call back later and turned off the phone. Sergey Kramskoy does not fit his home phone.

The documents shown by the militants are true

Nevertheless, Fontanka was able to establish that the documents of Alexei Malyuta and his contract with the Hong Kong Slavic Corps were real, and Malyuta 2013 was actually in Syria in October with a weapon in his hands. His brother, Sergei, told the reporter about this. They were contacted by journalists in Moran Security Group. The surprise was that Alexei Malyuta himself was alive and well. During the call of the Fontanka correspondent, the brothers noted the return and 9 days from the date of the announcement of their own death. My brother handed Aleksey a pipe, and he wished everyone to celebrate their 9 days like that.

Sergei Malyuta, who served as the senior security group in Syria, agreed to answer a few questions. But was laconic.

- Sergey, tell me, in October 2013, did you go on a business trip to Syria?
- Yes.
- Under the contract with which company?
- “Slavic Corps”.
- Is everyone back?
- Yes.
- What tasks did you perform?
- Protection and defense of economic objects of the Syrian Republic. The point is to relieve the Syrian army units from these duties so that they can take part in the fight against the bandits.
- You and your colleagues took part in the clashes?
- Of course not.
- How did it happen that some of Alexey’s documents were at the disposal of the opposition?
“They were just stolen.” The guys went to the store, buy groceries. The backpack, left briefly unattended, was dragged away.

The incredulous journalists were not completely satisfied with the conversation and asked Alexey Malyuta to send more reliable evidence of their presence in this world in order to publish it on Fontanka.

Here is the answer.

"Fontanka" does not dare to reproach men for some relaxation after returning from a combat zone.

According to the information available to the editors, at the present time all the guards, who left 2013 for Syria in late September under contracts with Slavonic Corps Limited, have returned to Russia. The short term of a business trip was due, according to our data, to the non-fulfillment of financial obligations by the host country, which caused problems with the domestic and food supply of the Slavian Corps fighters. The contract was terminated and the employees were revoked.

Ctrl Enter
Noticed oshЫbku Highlight text and press. Ctrl + Enter
We are
The last battle of the Slavic CorpsKurdish question in modern Syria
23 comments
Information
Dear reader, to leave comments on the publication, you must to register.