A sudden check of the operational readiness of the Nuclear Deterrence Forces, Air Force, Fleet and Long-Range Aviation forces 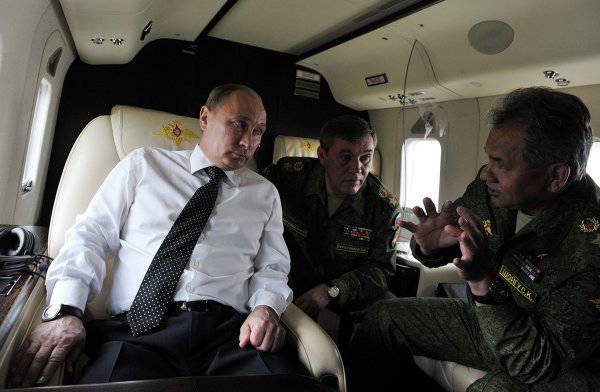 On October 30, under the leadership of the President of Russia, the Supreme Commander-in-Chief of the Armed Forces of the Russian Federation, Vladimir Putin, a sudden check of the combat readiness and exercises of the forces of nuclear deterrence, aerospace defense was conducted, fleet and Far aviation.

According to the press service and information department of the Ministry of Defense of the Russian Federation, during the training, the command and control system of the Armed Forces, the reliability of training orders and signals from the Central Command Post of the RF Armed Forces to the command posts of the units and military units of the country's nuclear shield, as well systems of aerospace defense of Russia.

Strategic bombers, submarine missile carriers of the Pacific and Northern fleets, strategic mobile and stationary missile systems, forces and facilities that solve the tasks of aerospace defense were involved in the training.

As part of a surprise check of the Northern Fleet submarines "Bryansk" and the Pacific Fleet "St. George the Victorious", 30 of October launched SLBMs from the waters of the Barents and Okhotsk seas.

Sea-launched ballistic missiles were launched from a submerged position. According to telemetry and observation posts, the head units of the missiles arrived at the appointed time at the Chizha test sites in northern Russia and the Kura in north-east Russia.

Shooting confirmed the established parameters of combat readiness and reliability of naval strategic nuclear forces, as well as the effectiveness of all elements of the combat command and control system. All required regulations are met.

At the Sary-Shagan test site, a short-range anti-missile launch was launched

As part of a surprise check with a combat crew of the Aerospace Defense Forces, a short-range anti-missile launch was launched at the Sary-Shagan (Kazakhstan) test site on October 30.

As part of a surprise check, the units of the 30 October Aerospace Defense Forces carried out combat shooting with the C-300 Favorit and Triumph C-400 anti-aircraft missile systems at Kapustin Yar.

At the same time, as part of a surprise check, anti-aircraft missile-gun systems “Pantsir-S” were fired at the “Ashuluk” test site.

Within the framework of a surprise test, the East Kazakhstani subunits successfully repelled a training massive rocket air strike against a conditional enemy.

In the course of the reflection of the training raid, VKO units destroyed more than 15 target rockets simulating aerodynamic and ballistic targets in various ranges of altitudes and speeds.

As part of a surprise check, the combat crews of missile forces and artillery units of the Central and Southern Military Districts 30 of October carried out launches of four Iskander and Tochka-U tactical missiles on training targets at the Kapustin Yar training ground in the Astrakhan Region.

To assess the effectiveness of hitting targets during the execution of live firing, rocket men used domestically produced unmanned aerial vehicles equipped with modern digital visualization and data transmission tools. The video signal from the reconnaissance vehicle was transmitted in real time to the command and control center at the test site, as well as to the command and control center, from which the missile launches and firing were generally guided.

The missiles successfully destroyed training targets located more than 100 km away from the launching sites.

The combat crews of the Strategic Missile Forces, during a surprise check on October 30, carried out launches of two intercontinental ballistic missiles.

The combat crews of the Strategic Missile Forces carried out intercontinental ballistic missile (ICBM) RS-12М Topol from the Plesetsk cosmodrome and the RS-20B Voivod from the Dombarovsky position area (East Orenburg region).

Prelaunch operations, launch and flight of ICBMs were carried out strictly according to the planned program. Both ICBMs with predetermined accuracy hit conditional targets at the Kura test site (Kamchatka Peninsula).

The material was compiled according to the Office of the press service and information of the Ministry of Defense of the Russian Federation.

Ctrl Enter
Noticed oshЫbku Highlight text and press. Ctrl + Enter
We are
Sudden verification of the combat readiness of the Northern Fleet, ZVO and Airborne TroopsCompleted a surprise check of the troops of the Central Military District
27 comments
Information
Dear reader, to leave comments on the publication, you must to register.