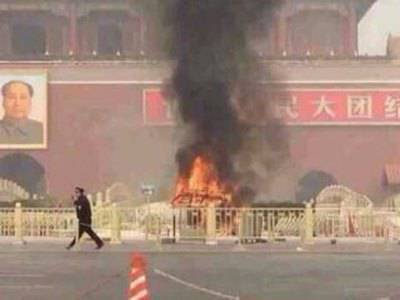 The Chinese government has officially qualified an accident on Tiananmen Square in downtown Beijing as a terrorist attack by Uygur Islamic radicals. According to the authorities, the people who were in the car were suicide bombers. Earlier, the authorities wanted two ethnic Uygurs from the Xinjiang Uygur Autonomous Region.


The accident happened on October 28 in downtown Beijing. The car with the numbers of Xinjiang Uygur Autonomous Region (XUAR) crashed into a crowd of people. As a result, five people were killed, including three who were in the car. In addition, at least 38 people were injured.

According to the Hong Kong-based Information Center for Human Rights and Democracy, one of the suicide bombers in the car was a relative of a man who died during the bloody clashes between Uighurs, resettlers and Chinese police in Xinjiang in June of this year.

The June clashes were the bloodiest since 2009, when about 200 people died in clashes in the capital of the XUAR, the city of Urumqi, and the number of injured reached two thousand.
XUAR in the Western press is sometimes called the “Chinese Chechnya”, drawing an analogy between the fierce resistance of the indigenous Muslim population of this region and North Caucasian separatism. Half of the region’s population are Chinese, as many representatives of the Turkic-speaking peoples of the Muslim faith (42% Uigurs, 6,% Kazakhs, one percent of Kyrgyz and Tajiks).

In ancient times, East Turkestan was a powerful state, which had a tremendous impact not only on Central Asia, but also on China. In 1759, Chinese troops seized the region and called it Xinjiang (in Russian, "New Frontier").

Since the inclusion of their lands in China, the Uighurs have rebelled more than four hundred times. In 1944, the Uighurs even managed (with the help of the USSR) to take control of the western part of Xinjiang and proclaim the Eastern Turkestan Republic. But it existed only until the 1949 year: Joseph Stalin decided not to annoy the communists who came to power in China.
The current tragedy on Tiananmen Square (the same "holy" place for China as Red Square for Russia) is the first terrorist act of the Uygur separatists outside Xinjiang. And here again, there are direct parallels with the North Caucasus. So, at the beginning, Chechen separatists fought only on the territory of their republic, and then decided to change tactics, to make sure that “war came to every Russian home”.

Both the Uigur and North Caucasian separatists view their struggle not as a national, but as a religious one (liberation from the power of the infidels), therefore they act as a united front. The Uigurs fought on the side of the separatists in Chechnya, and today they are fighting side by side with their "Caucasian brothers" in Syria and Afghanistan.

In fairness it should be noted that, most likely, the separatist movement in China will not reach the same strength as in the Russian Federation. Against the separatists, both the relatively low number of Uygurs in China themselves and the more rigid and effective, compared to Russia, work of the Chinese power structures are working.

In any case, the precedent for the transfer of "hostilities" beyond the rebellious autonomy has already been created, and this symptom is very alarming for the authorities of the Middle Kingdom.

Ctrl Enter
Noticed oshЫbku Highlight text and press. Ctrl + Enter
We are
Beijing, Kunming, Urumqi and Guangzhou: The Changing Landscape of Anti-Chinese JihadistsGeopolitics around China. Xinjiang
68 comments
Information
Dear reader, to leave comments on the publication, you must to register.