Evgeny Pozhidaev: Maneuvers Minsk-Moscow-Kiev: what is the Customs Union without Ukraine? 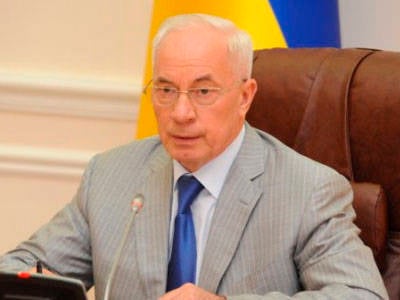 During the last month, rather exotic political maneuvers took place to the west of the Russian borders. So, during the visit of the Ukrainian Prime Minister Mykola Azarov to Minsk, well-known theses were once again voiced, passionately loved by the Ukrainian authorities and propaganda. “Russia directly tells us:“ We will complicate your life. ”I ask the question, why do we have to complicate life? On the contrary, it should be made simpler, more joyful. There should be no barriers just because there are no grounds for that.” "Ukraine has two dozen such agreements. I remind those who are not aware of this, that we had a free trade regime with all our neighbors before their accession to the EU. With Slovakia, Bulgaria, the Czech Republic, Estonia, etc. This is absolutely did not prevent us from trading with Russia, just as it did not prevent us from working with Belarus and other countries, "said the head of the Ukrainian government.


If you call a spade a spade, in this case we are talking about unveiled extortion. Ukraine’s entry into a free trade zone with the EU while maintaining the most favored nation status with the countries of the Customs Union means for the latter an actual reduction of customs duties for European producers to the current Ukrainian level (that straight-line re-export will flourish, obviously) - that is, significantly and at the same time one way. At the same time, it is somewhat strange to compare Estonia and Slovakia with Germany and France. Equally impressive will be the growth of goods squeezed out of the Ukrainian market - while the symmetrical growth of Russian exports to Ukraine cannot be in principle (on the contrary, it will decrease due to increased competition and the inevitable decline in effective demand, now supported by gigantic debt overhang and overvalued hryvnia ). In other words, the Russian Federation is invited to pay for the simple and joyful life of the Kiev government, with its own hands placing itself in discriminatory terms of trade with the EU and Ukraine.

This is arrogance even by the standards of Ukrainian foreign policy, the authors of which invariably and by default view the eastern neighbor as a kind of quasi-colonial territory and a source of free resources. It is all the more striking that this position has found a complete understanding of the official Minsk. Belarus almost straightforwardly made it clear that it would not make changes to its own customs regime with Ukraine. At the same time, a little earlier, she practically sabotaged sanctions against Ukrainian and Lithuanian products. Finally, Minsk "welcomed" the process of Ukrainian European integration. In other words, the Customs Union, not having time to take shape, began to drift to the format "2 plus 1", and Lukashenko tried to put into practice the dream of Yanukovych about selective observance of the "favorable" rules of the vehicle.

At a meeting of the Supreme Eurasian Economic Council and the Council of Heads of CIS States 24 October, the picking continued. This time, along with the next series of economic claims, the Belarusian position emerged, firstly, about the need to take into account the interests of Azerbaijan if Armenia is admitted to the Customs Union, which practically means freezing its expansion plans. The next was the idea of ​​Kazakhstan to admit to the CU Turkey, which is already part of the free trade zone with the European Union and is in close relations with Baku.

Nevertheless, the countries of the Customs Union managed to agree on the agreed increase in duties on Ukrainian products in the event Kiev signed the Association Agreement with the EU. In other words, the creep to the "2 plus 1" format has stopped. Lukashenko, bargaining and working for the public, actually passed Ukraine.

So, within the CU, we see a set of contradictory trends. How will the situation develop further? The motives of the main players are quite transparent. The Ukrainian elite, publicly convincing the population that the free trade zone with the EU is a notorious source of heavenly manna, in reality, understands perfectly well that it is possible to enter it relatively painlessly only in one way - at the Russian expense. Hence, for example, the epic plans of Azarov to double exports to the Russian Federation (while their epic frankly smacks of re-exports). On the contrary, the weakening of trade relations with Russia will simply turn the Ukrainian economy into smoking ruins, collapsing entire sectors - the Russian Federation and the CU countries account for 27,1% of exports, 26,2% of imports of goods and services, including almost all exports of machinery and equipment. In other words, Ukraine has no way out - Kiev should in any way push the conservation of a preferential customs regime. At the same time, it is very likely that Azarov’s confidence that this will succeed was based on the tacit support of Brussels, who was rather actively engaged in his own economic blackmail.

For Russia, the requirements of Kiev are unacceptable. Accession to the WTO has already significantly and adversely affected the dynamics of our economy. Actual entry into a free trade zone with the European Union will deal an even more powerful blow on it, which the Kremlin cannot afford. Losses on the Ukrainian market will hardly frighten Russia: interaction with it is only 5,2% of exports and 5,7% of imports. At the same time, the Ukrainian economy exists largely due to the supply of Russian fuel and raw materials, and the country is also unable to refuse a significant part of high-tech Russian exports - thus, having frozen the "nuclear" import from the Russian Federation, Kiev will punish itself. In other words, the price of the issue, even in the case of a full-fledged trade war, is only less than 2% of exports. At the same time, a significant part of it will be compensated on the domestic market - thus, the decline in the share of Ukrainian steel will be very beneficial to the recent stagnation due to a decrease in demand in the foreign markets of the Russian metallurgy. Neighborhood has not been anything particularly interesting or technologically critical either.

For Minsk, the situation is much more ambiguous. Ukraine accounts for about 10% of Belarusian exports and 4,4% of imports, the Ukrainian market is interesting for Belarus and a pronounced positive trade balance with Kiev. At the same time, in case of a separate non-compliance with agreements on customs duties, Belarus could earn on more or less straightforward re-export of Ukrainian goods to the Russian market (this cannot be done legally, but for Minsk such exercises are, alas, common practice). At the same time, the Belarusian economy, with its totally controlled business, is fully capable of defending itself against the influx of European goods and without tariff barriers.

On the other hand, Belarus depends on trade with Russia and actual Russian subsidies absolutely totally. At the same time, in essence, the Belarusian reserve of socialism kept afloat at the expense of a simple operation - to receive crude oil from the Russian Federation at Russian domestic prices, to process at the oil refineries remaining from the USSR, to resell (mainly to Europe). The second sector of the Belarusian industry, which is competitive outside the CIS, is the production of fertilizers, which is largely dependent on cheap Russian gas. Further, the Belarusian industry and agriculture are fully capable of claiming part of the Ukrainian share of the Russian market. As a result, the tactical "union" between Kiev and Minsk pursued the same tactical goal - to return 4 billion of re-export revenues. And Lukashenko achieved this goal.

As for Kazakhstan, it is isolated between Russia, increasingly friendly with China and unstable in the future Central Asia, also has no alternatives to rapprochement with Moscow. Nevertheless, the risk that the Eurasian integration process will go with increasing obstacles and freeze for a long time is still there, and not a small one. Firstly - and this is a standard situation, well known from the experience of European integration - the processes of rapprochement are frozen for a long time by economic crises. Thus, the formation of a "single European space", quite vigorous in 50-x - the beginning of 70-x, was interrupted by the crisis of 1970-x - and, moreover, largely rolled back. Partners are too inclined to shift the blame for their own difficulties on each other. Secondly, the rate of regional integration is inevitably influenced by the type of integrable economies - more precisely, the role and place in them of agrarian and raw materials exports to developed countries. In this sense, the example of Latin America is indicative. It would seem that the prerequisites for creating a powerful regional association are obvious (the actual absence of pronounced cultural and language barriers even between Brazil and Hispanic countries, the need to achieve a consolidated position in relations with the United States, etc.). It is not surprising, therefore, that the process of Latin American integration was launched already in 1958, only seven years later than European, and at first it was very active. So, within the framework of LAST (10 of the countries of South America plus Mexico) trade and capital flows were significantly liberalized, coordination in the production and currency spheres was planned. However, then the process “hung” along with the pace of industrialization of the region - and resumed only in 1990-s with the emergence of the Mercosur unification led by Brazil. At the same time, Mexico was lost forever for regional integration, having entered into the NAFTA bloc led by the US (now the country is plunged into an endless drug war). Further, Mercosur himself nearly collapsed in the "zero" - the allies were too actively entering into separate agreements with the proposed alternative project of the ALCA Washington, despite its obviously colonial overtones. In essence, the union saved only two factors - the general bankruptcy of American foreign policy under Bush Jr. and, as the most fundamental factor, the industrialization of Brazil.

Meanwhile, the countries of the post-Soviet space interact economically with the outside world too in a Latin American way. The predominance of raw materials in the export of Russia and Kazakhstan is well known; The actual raw material nature of the “external” exports of Belarus was mentioned above. In Ukraine, things are no better - the three pillars of its current economy are metallurgy, in exports of which the share of somewhat complex products is decreasing, chemistry, in exports of which the simplest products totally prevail, and agriculture. At the same time, if the Russian Federation and Kazakhstan, although too slowly, re-industrialize, and Belarus is stagnating, then Ukraine is increasingly moving to Latin America 1960's (also known as Moldova).

In general, it is obvious that the process of reintegration of the post-Soviet space will be difficult to go on - meanwhile, this is the only chance to speed up the process of re-industrialization. Ukraine may well share the fate of Mexico.

Ctrl Enter
Noticed oshЫbku Highlight text and press. Ctrl + Enter
We are
A great interview with Sergey Lavrov: about Ukraine, Obama and IranWhat you didn't want to know about England
164 comments
Information
Dear reader, to leave comments on the publication, you must to register.