On November X, NUMX Baltzavod will lay the lead nuclear icebreaker of a new generation 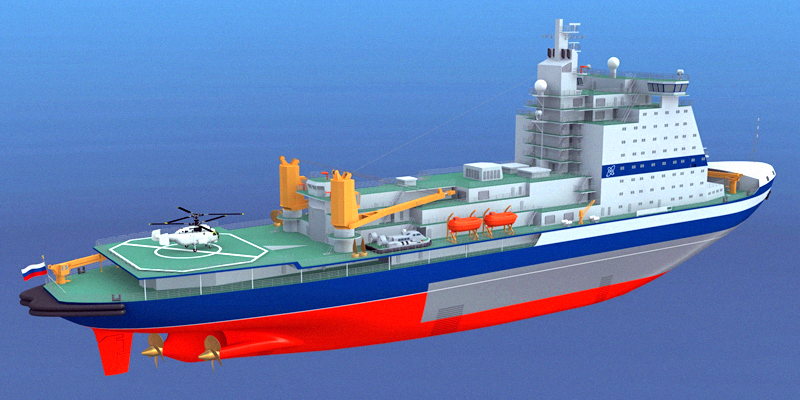 In St. Petersburg, on the building berth "A" of the Baltic 5 plant, on November 2013, a solemn ceremony of laying the head 60 multi-station nuclear icebreaker with a capacity of 22220 MW of the XNUMX project will be held.


It is expected that the event will be attended by Deputy Prime Minister, Chairman of the Maritime Board of the Russian Federation Dmitry Rogozin, Head of the Ministry of Transport and the Ministry of Industry and Trade of the Russian Federation Maxim Sokolov and Denis Manturov, President of the United Shipbuilding Corporation Vladimir Shmakov and others.

Icebreaker LC-60 project 22220 will be the largest and most powerful icebreaker in the world. Its length is 173,3 m, width is 34 m, the draft at the design waterline is 10,5 m, the minimum working draft is 8,55 m. Displacement is 33,54 th. Tons. The icebreaker has a two-reactor power plant with the main source of steam from the RITM-200 reactor installation with a capacity of 175 MW.

The technical design of the nuclear-powered icebreaker was developed by Iceberg Central Design Bureau in 2009. The two-draft design of the vessel allows it to be used both in the Arctic seas and in the mouths of polar rivers. The icebreaker will operate in the western region of the Arctic: in the Barents, Pechora and Kara seas, on the Northern Sea Route, as well as in the shallower parts of the Yenisei estuary and the Ob Bay area.

United Shipbuilding Corporation OJSC is the largest shipbuilding company in Russia. Created in accordance with the decree of the President of the Russian Federation in 2007, with 100% of shares in federal ownership. The holding includes about 60 enterprises and organizations of the industry (major shipbuilding and ship repair yards, leading design bureaus). Currently, around 80% of the domestic shipbuilding complex has been consolidated on the basis of USC. The Russian market is the main one for the state corporation, which also exports its products to 20 countries of the world.

Ctrl Enter
Noticed oshЫbku Highlight text and press. Ctrl + Enter
We are
Laid the keel of the first Soviet-era icebreaker with a capacity of 25 megawattsRogozin visited Nizhny Tagil, shot from a tank and a gun
8 comments
Information
Dear reader, to leave comments on the publication, you must to register.