November 1 2013
52
According to the 22 th amendment to the US Constitution, one person can hold the post of American president for no more than two terms. The amendment was accepted because Franklin D. Roosevelt ruled the United States for four terms: in 1940, he was elected for a third term, in 1944, for the fourth term. After the end of World War II, American democracy in the face of Congress imposed a two-term limit, fearing a possible dictatorship: some future tyrant could take advantage of Roosevelt's precedent. The 22 amendment was approved in 1947 and ratified in 1951. 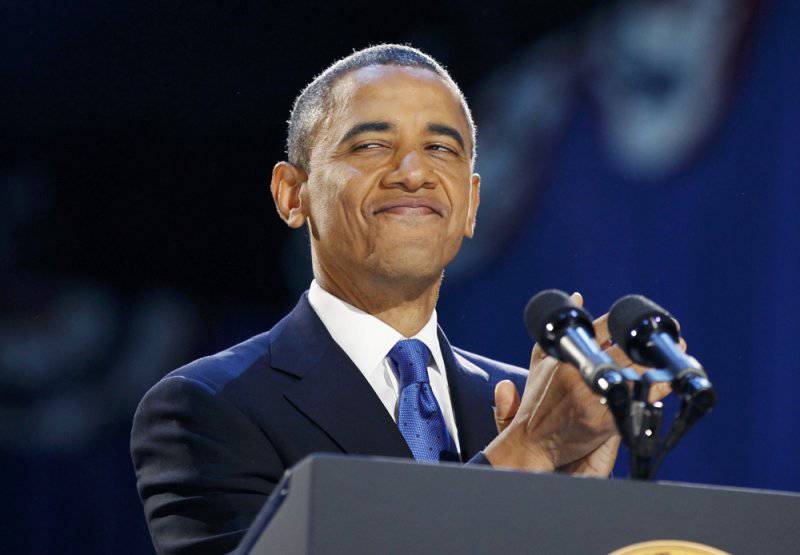 As shown historical perspective, the amendment made sense. In 2008, Barack Obama was elected President in the United States - a man in whom George Orwell's gloomy predictions began to come true in the country (see the novel 1984, which depicts a totalitarian American future with Big Brother, watching screens in cramped apartments and the Ministry of Truth ) In 2013, Barack Hussein really thought about a third presidential term and, according to rumors, already talked about this subject with a competent lawyer - the US Attorney General.

In January, 2013 of the year - that is, after Obama’s second victory in the presidential election and shortly before the inauguration - on Fox News Latino A note appeared in which the idea of ​​José Serrano, a Democratic congressman from New York, was reported. This person believes that the 22 amendment to the Constitution should be repealed by law, which will enable Barack Obama to remain the master of the White House for the third time. Mr. Serrano didn’t limit himself to words and on January 4 presented the corresponding bill.

The note noted that Serrano is far from the first opponent of the 22 amendment, which, according to some experts, actually turns the American president into a “lame duck” in his second term. A similar resolution was even introduced by Senate Majority Leader Harry Reid in 1989.

Ronald Reagan, after becoming president, expressed his support for the 22 Amendment, but changed his mind during his second term. In an interview with Barbara Walters in 1986, Reagan said that "thinking about this more and more, I came to the conclusion that the 22-I amendment was a mistake."

Bill Clinton is also among the opponents of the 22 amendment.

October 23 Stephen Wallace in "National Report" wrote that Barack Obama is likely to consider what was once unthinkable: go for a third presidential term. At the same time, the journalist reports that recent polls have shown: an increasing number of Americans support this idea. Others either did not make a choice, or do not mind.

Referring to the documents allegedly at the disposal of the National Report, including private electronic correspondence between Barack Obama and Attorney General Eric Holder, the journalist points to some “specific”, even if “speculative,” questions from Obama seeking advice on circumvention. The 22 th amendment or such editing of the US Constitution, which could pave the way for the next legal re-election.

Where did the web portal on which the so-called “citizen journalists” work, the correspondence of Obama and Holder?

It turns out that there is a certain anonymous source, prescribed in the office of the American Attorney General. He kindly agreed to talk to a journalist.

The mysterious stranger noted that today the Constitution prohibits being elected for a third term, however, as every American knows, the Constitution is a living document. If necessary, it can be changed as the people see fit. The very fact of that, the anonymous said further, that there were already 27 amendments, shows that the idea of ​​Obama’s third term - even if it would require overcoming what seems insurmountable - is quite realizable.

What need can lead to constitutional changes?

According to the source, preventing the attempts of the extreme-right Republicans to seize control over the executive branch is in the interests of all Americans. These are exactly what the administration of Barack Obama can declare a threat to democracy. And the threat will require "emergency measures."

The Attorney General in his responses informs the president that the states should ratify the amendment to 3 / 4, and indeed, 26 of them are controlled by Republicans.

Obama, on the other hand, is oppressing his line, relying on extraordinary powers and unforeseen circumstances.

The very next day, responding to the Prosecutor General, he asks for a list of "unforeseen" circumstances that would give the president extraordinary powers - say, in wartime. He also asks a question about the restrictions of rights when declaring martial law by the president.

Conspiracy therapists, add on my own, will find here plentiful food for thought. Stories with hundreds of thousands of plastic coffins, FEMA camps, a huge amount of ammunition, which are officially purchased by the US Department of Homeland Security along with bulletproof and fireproof checkpoints and special equipment, total surveillance and interception of the NSA, pressure from the Obama administration on opposition journalists, extension of the “Patriotic Act” "And the introduction in 2011 of the Year of the" Authorizing Act on National Defense ", which transferred the so-called anti-state affairs into the able hands of army representatives or the special services and to remove the legal procedure from the cases, - all this “seems to hint” that the ironic comment of Comrade Wallace did not appear from scratch.

By the way, in addition to the acts mentioned, the United States adopted in 2007 the “Defense Warrant Act of John Warner”, which allows the American president to declare a state of emergency, send troops to any point of the country and take control of the state with the help of the National Guard. Consent of governors or cities are not required. The purpose of the state of emergency is to “suppress the disturbance of public order”.

It is necessary to mention the “Food Order”. This decree periodically updates the powers of the president. When the decree enters into force, the president gets the right to take control of all state energy sources, including oil and natural gas, to gain control over all civilian traffic, and even provides the possibility of introducing conscription in order to achieve both military and non-military objectives.

As for the threats to which we will have to respond with emergency measures, there is no need to go far for an example: quite recently the federal government turned off for sixteen days. And Republicans from Congress were to blame for this, including, among other things, the Obama health insurance program (nicknamed “Obamacare”).

And one more thing to add.

Barack Obama does not want to concede in anything to one of his main political competitors on the planet, Vladimir Putin. The first loves to make pompous speeches in public, hiding in a bulletproof booth, and the second takes articles in the New York Times. Obama declares American exclusivity, and Putin makes this exclusivity a matter of timely criticism. Obama brews beer, and Putin catches pike. The American president advocates for homosexual rights, and his Russian rival does not approve of same-sex love. The Syrian crisis hurt the reputation of the aggressive owner of the White House, and the Kremlin strategist became famous as a 21st century peacemaker. Barak Hussein rules his second term for his state, and Vladimir Vladimirovich is already the third.

Agree, a list of comparisons - not in favor of Obama. True, Obama has a “Nobel Prize”, but the authority of this award is rather dubious. Here Obama should rather be compared with Gorbachev.

And further. Obama is the president of crisis America. It was during his time that the national national debt reached an astounding amount, and the number of poor and needy was 15% of the country's population. To brag, in short, nothing.

Obviously, Obama would like to go down in history, and not “plunge” into it. Leading economists are sure that the crisis in the world will last at least another few years. The most pessimistic forecasts reach 10 and even 20 years. If we reject extreme points of view, overcoming the years of the 5-6 crisis, in order to get towards the end of the third term the laurels of triumph that revived America, could become the historical goal of Mr. B.H. Obama.

Of course, in order to achieve this goal, you will need cartridges, camps, coffins and faithful dogs from DHS (Department of Homeland Security). But how! Without dictatorship and state of emergency anywhere. Obama could improve the economy with an eye on the experience of another ruler from Russia - Stalin. Forced industrialization in its high-tech-sharachechnogo version would allow Obama (for which just are powerful IT corporations) to return production from China, thereby inflicting a strategic defeat on a major geopolitical opponent.

But for the implementation of such economic and political protracted B.H., a third term is needed ...

Ctrl Enter
Noticed oshЫbku Highlight text and press. Ctrl + Enter
We are
Results of the week. "And if we do not wipe at our William, Shakespeare ?!"Exchange in American: Jackson-Vanik amendment changed to Magnitsky list
52 comments
Information
Dear reader, to leave comments on the publication, you must to register.