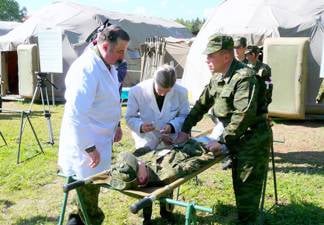 I would very much like to discuss the topic of the latest exhibition of the military field medicine.


Yesterday (30.10.2013/XNUMX/XNUMX) I saw in the news report from this exhibition. Promedol (anesthetic antishock effect) was removed from regimental first-aid kits. Some very "smart military" medical luminaries have replaced PROMEDOL with IBUPROFEN, which old women treat for rheumatism, and even then with minimal results.

I am very interested in, who could have come up with such a “brilliant” thought? It seems that the people who did this have nothing to do with the actual combat situation and medicine in general. On my own example, I can say that, having received a shrapnel wound in the chest with small fragments (the left ventricle of the heart and the left lung struck), in an unconscious state reaching the surgical table, later in the postoperative period I received promedol and thromedol, despite the punctured lung, the respiratory depression the system. Without these drugs, I could not breathe - due to pain caused by injury and further surgical intervention (torn ribs of the chest + tube catheters inserted into the lung between the ribs). And what to say, for example, when the foot, arms, hands are torn off ... Doctors suggest ibuprofen to inject a crippled soldier ?? I would like to look at the doctor himself if he were on the site of this fighter with an ibuprofen injection before evacuation from the battlefield.

The percentage of mortality of such injured and injured people (open limb fractures) from pain shock will increase one and a half times. And there will be nobody to sort by the Pirogov system. Perhaps this is what they strive for so as not to mess with future cripples! I’m not even talking about situations when you need to get important information from a seriously wounded person - for the survival of the rest of the group of servicemen.

So that the excuse that opium drugs inhibit respiratory function, in my opinion, for all 100% are not a reason to replace the drug, in the extreme case, you could leave both that the paramedic himself could decide which drug to use, depending on the situation and condition of the wounded.

Always in all history local military conflicts syringe tube with promedol was in fact the last hope of the wounded, helping to wait for the evacuation or painlessly move into another world.

PS I am not a doctor. Point of view of a soldier.

Ctrl Enter
Noticed oshЫbku Highlight text and press. Ctrl + Enter
We are
Armor is strong. Report from the armored plant, where equipment is repaired for ATO (Ukraine)What you didn't want to know about England
84 comments
Information
Dear reader, to leave comments on the publication, you must to register.