October 31 2013
9
From 22 to 25 in October, the 17-th International Exhibition of State Security Means - Interpolitech-2013 was held at the All-Russian Exhibition Center. The exhibition is held annually in accordance with the orders of the government of the Russian Federation. This year, France received the status of the partner country of the exhibition, which was represented at the exhibition as never before by a large exhibition. "Interpolitech" is the largest exhibition in our country of various means to ensure the security of the state. This is a unique Russian congress and exhibition event with federal status and importance.


The exhibition is held in order to provide suppliers and manufacturers of modern special equipment, special means and weapons with an effective tool for monitoring the market, solving the whole complex of advertising and marketing tasks, as well as making profitable trade deals. The result of the exhibition is the formation of orders (first of all the state order), as well as the implementation of a number of federal programs - federal targeted programs. The most important aspect of the exhibition is the full support from the Russian government, which makes it possible to demonstrate here unique products for special and military purposes.

So, at the Interpolitech-2013 exhibition, all interested parties were presented with a special helicopter overhead rescue platform under the designation PSP-MM, which is designed to evacuate citizens in various critical situations from hazardous areas. It is worth noting that the presented platform is a dual-use product, it can be used as aviation medical and rescue services, as well as special forces of the Russian power structures. The director of LLC NPM Mikromontazh Lev Kuzmin spoke about the capabilities of this system to the Rosinformburo website. This company, located in Nizhny Novgorod, is a system developer. 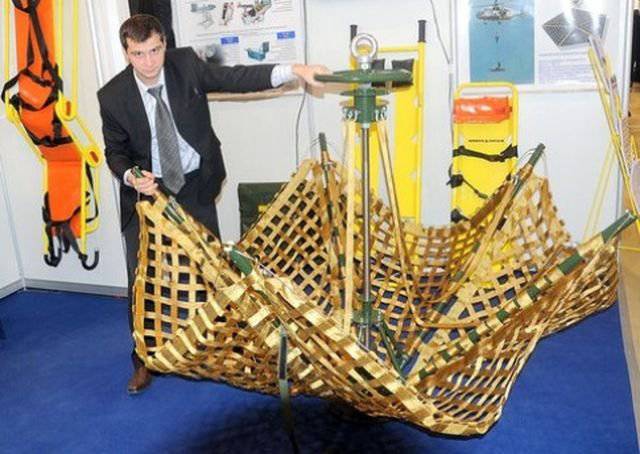 Presented at the Interpolitech exhibition, the PSP-MM platform is intended for emergency evacuation of the wounded and injured from any surface where it is impossible to land a helicopter. In addition, this platform provides landing and evacuation of special forces personnel, as well as transportation of various goods to a given area on the ground. In the stowed position, the invention of the Nizhny Novgorod designers can be easily imagined as an ordinary folded umbrella, albeit with a total weight of 55-65 kg. The “umbrella” of this rescue platform is made using high-strength aramid fabrics or, as they are also called, Kevlar fabrics, which are able to withstand huge overloads and high temperatures (up to 750 degrees Celsius). The skeleton of the “umbrella” is made of very durable aluminum alloys.

When resetting this design from a helicopter, the platform opens automatically and on a cable from 25 to 50 meters in length, falls to the surface. In the version presented at the exhibition, the platform can accommodate up to 10 fully equipped people or various loads with a total weight of up to 1500 kg. In the folded state, the total diameter of the structure does not exceed 40 cm, and in the unfolded state - 290 cm. (Area of ​​“umbrella” 6,6 sq. M). The time to bring the rescue platform to working condition does not exceed 30 seconds, and the maximum evacuation rate of soldiers or victims is up to 150 km / h. Included with the rescue platform are also a means of ensuring the safety of people. 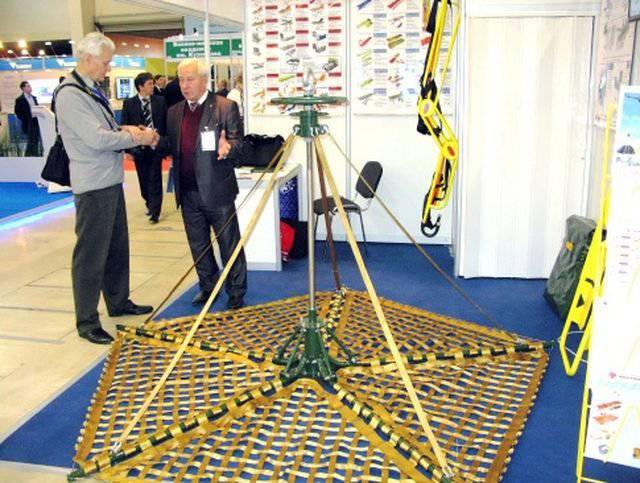 According to Lev Kuzmin, the director of NPP “Mikromontazh”, this rescue platform has aroused great interest among various organizations and structures. Kuzmin explained that the capacity of this product is easy to change, products can also be created in Nizhny Novgorod "for any requirements of customers, taking into account the elaboration of their needs." Presented in Moscow at the exhibition is a copy of the rescue platform designed for use on multi-purpose medium helicopters Mi-8.

Another important area of ​​activity of NPP "Mikromontazh", as we have said above, is the development of various medical equipment, including space applications. For example, together with the Cosmonauts Training Center, a number of special products were developed, which are intended for astronauts to train, rescue and transport them after landing. Lev Kuzmin noted that at the moment "Mikromontazh" is the only Russian manufacturer of this kind of products, which in a number of parameters exceeds foreign analogues.

Today, more than 80% of all ambulances in our country are equipped with the means of moving patients made by NPP Mikromontazh, said Lev Kuzmin. As an example of the high-quality and efficient operation of the enterprise, Kuzmin spoke about the development of a unique optical-electronic device, vidicon, over the course of 3 months. With the help of this device in 1969, we managed to take photos of the far side of the moon. Lev Kuzmin explained that this product required micron precision, which, he said, exceeded the accuracy of laser-based instruments. 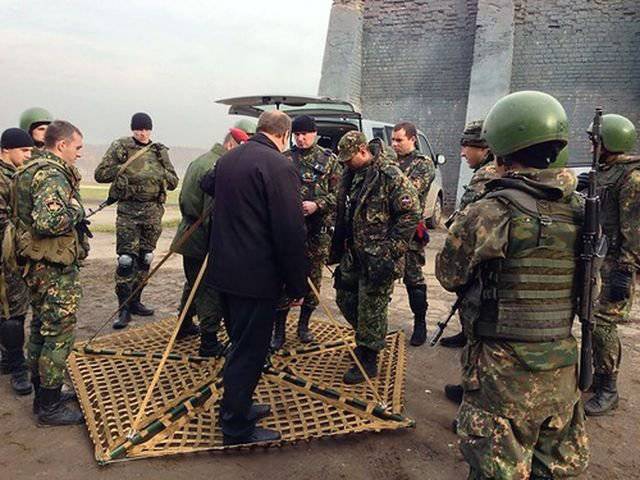 The Test of Fighting

Demonstration performances using the PSP-MM rescue platform were held on October 26 2013, at the proving ground near Krasnoarmeysk, where special units exercises were held. Suspended rescue platform PSP-MM is a dual-purpose device that is intended for emergency evacuation of people to a safe place and provide them with the necessary assistance.

According to the legend of the exercise, the novelty was to be used to evacuate the wounded as part of a special operation from the immediate combat zone. At the point designated earlier, the helicopter arriving at the site reset the rescue platform, at a certain height the device opened automatically according to the principle of an ordinary umbrella and was lowered to the ground on a high-strength cable. The helicopter itself did not land, and after “the wounded commando was mounted on the platform, he immediately left the battle zone. It should be noted that this was the second successful demonstration of this rescue platform. The first time it was shown in the framework of the "Day of Innovations", which the Russian Defense Ministry held in July 2013 of the year.

Ctrl Enter
Noticed oshЫbku Highlight text and press. Ctrl + Enter
We are
Innovation Day of the Southern Military District: Pictures from the ExhibitionThe most promising US military projects, the use of which is possible for peaceful purposes
9 comments
Information
Dear reader, to leave comments on the publication, you must to register.