October 31 2013
21
Currently, Belarusian UAVs are becoming more and more famous and enter the international market for unmanned aerial vehicles. aviation complexes. So far, we are talking about small reconnaissance drones. At the recently held Interpolitech-2013 exhibition, the Belarusian company AGAT-Control Systems, together with the 558th Aviation Repair Plant, presented to the general public a whole line of tactical drones. According to Yuri Leontsev, who holds the post of deputy director of the AGAT-control systems enterprise for development and system research, with its new developments in the field of unmanned aerial systems (UAS), the company expects to solve the problem of import dependence in practice, as well as provide law enforcement agencies with tactical short-range UAVs ... In the future, the company plans to develop a modern multifunctional UAS with a range of more than 100 kilometers, with an orientation not only to the Russian and Belarusian, but also to the international market.


The Ministry of Defense of the Republic of Belarus is considering the possibility of buying 2 types of unmanned aerial reconnaissance and surveillance systems in 2014. According to Dmitry Kushpyak, who holds the post of deputy head of the management of the company AGAT-Management Systems (a subsidiary of the Geoinformation Management Systems holding), negotiations are underway on supplying complexes with the Berkut-1 and Berkut unmanned aerial vehicles to the interests of the Belarusian armed forces -2. Both types of UAVs are referred to as tactical intelligence complexes with a small radius of action.

Each of the listed complexes is able to solve its tasks, and the Belarusian military is still only deciding which complexes need to be ordered. Currently, the UAV "Bercut-1" and "Bercut-2" are preparing to conduct flight state tests, after which they will be assigned a letter of the serial sample. When exactly these unmanned aerial vehicles will go into service with the Belarusian army is not yet known. 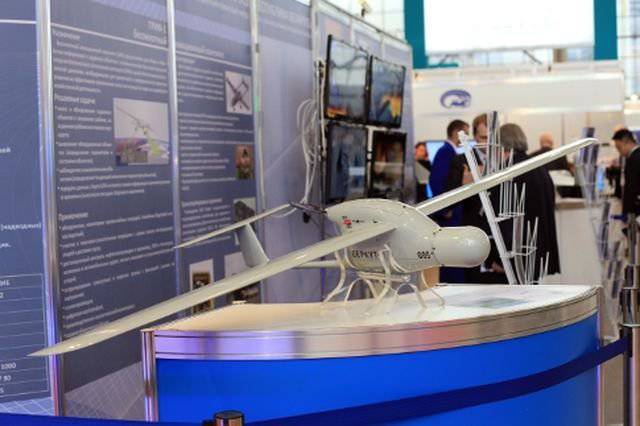 UAV Bercut-1
UAV "Bercut-1" short-range is an all-day tactical unmanned aircraft complex, which is designed to issue target information to firing means of special forces units and motorized rifle units, as well as optical-electronic reconnaissance of the terrain. Bercut-1 provides real-time monitoring of the surrounding terrain, the detection and identification of both ground and surface objects and the issuance of coordinates of their location.

With a very small mass - only 15 kg - the device "Bercut-1" together with the payload is able to fully fly to a distance of 15 km at an altitude of 1000 meters. The cruising speed of the vehicle is 50-80 km / h, the device can fly for 1,5 hours. The equipment installed on it allows you to transfer the coordinates of the detected targets with an accuracy of at least 50 meters. The device takes off directly from the hands of a serviceman-operator, landing UAV by using a parachute. The UAV can be installed payload in the form of 3-x types of modules: TV, photo or IR intelligence.

UAV "Bercut-2" is able to solve similar problems in the interests of artillery and rocket forces, as well as motorized rifle units, but it is characterized by its large size and best flight performance. This drone is performed in a portable version. With a total mass in 50 kg, an aircraft with a payload is able to fly fully to 35 km, at altitudes up to 3000 meters, in a fully automatic mode. Cruising speed is 80-100 km / h. Time spent in the air - 2 hours. Accuracy characteristics of determining the coordinates of targets for the devices "Bercut-1" and "Bercut-2" are similar. For takeoff UAV "Bercut-2" uses a catapult, landing is also carried out using a parachute. The payload kit also includes an 3 intelligence module. The Bercut-2 complex is serviced by a calculation as part of 2 people. 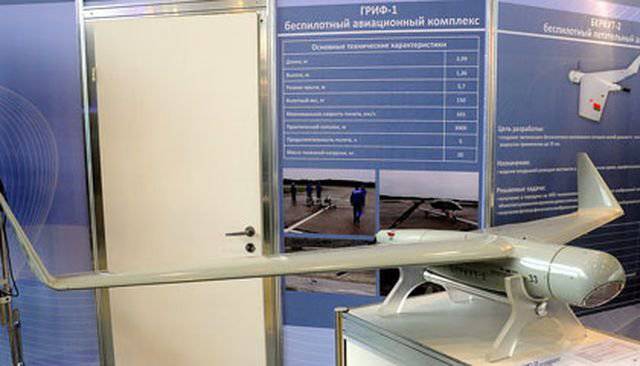 UAV Bercut-2
In addition, the exposition of Belarus contained information about a more sophisticated vehicle - the tactical unmanned aviation complex Grif-100. This device is designed to detect, search and recognize objects on the ground (including on the water surface), determine their coordinates. In addition, the UAV can be used to solve the problems of electronic suppression (REF) of electronic means of a potential enemy, as well as conducting topographic reconnaissance areas. The take-off weight of this drone is already 165 kg. He is able to fly at speeds up to 165 km / h, the maximum height of the flight - 3000 meters. Payload mass - 20 kg, flight time - 5 hours. This unmanned complex consists of 3-x machines: machine control, transport machine (4 UAV), as well as the machine logistics. In the first quarter of 2014, the flight tests of the Grif-100 complex should end, after which its state tests will begin with the forces of the Ministry of Defense of the Republic of Belarus.

This drone is made according to the two-beam scheme and is equipped with an internal combustion engine, in its case the most modern composite materials are used. The take-off of the drone is carried out both "in an aircraft" and with the help of a catapult, landing also in an "aircraft-like" manner, and in the event of an emergency, the Grif-100 UAV is able to land using a parachute. Flight control can be implemented on a route already drawn up in advance or on coordinates that are transmitted from the ground. UAVs are able to solve tasks in different climatic conditions, day and night. His first test flight drone made another 21 February 2012 year at the airport Baranavichy, the flight lasted only 10 minutes and passed completely in normal mode.

Today in the development of unmanned aircraft systems, enterprises of the Republic of Belarus cooperate with Russia. In particular, within the framework of the MAKS-2013 air show, the Russian company Irkut Engineering, which is a subsidiary of Irkut Corporation, concluded an agreement on cooperation in the development and modernization of tactical-class unmanned systems with the Belarusian company AGAT-control systems ". The purpose of the agreement concluded between the companies is to establish the necessary conditions for successful innovation, as well as the effective application of the results of the development of both parties in the field of modernization and organization of the production of short-range UAS, the concentration of financial and production resources for the effective implementation of programs to develop promising UAS in the Russian Federation and the Republic of Belarus, improving the competitiveness of products. At the same time, production facilities are planned to be located mainly in the territory of the Belarusian enterprise. 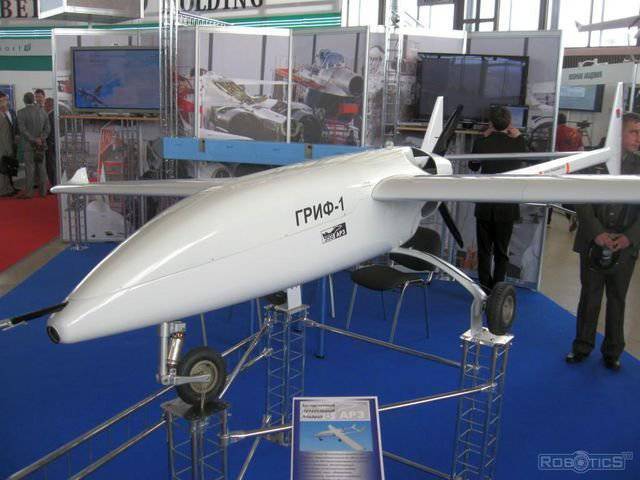 It is reported that both companies plan to pursue a unified marketing policy, ensure the supply of spare parts and process equipment, improve after-sales service for products, jointly train specialists for servicing unmanned aircraft systems, and promote the development of operational documentation. In the future, Russian and Belarusian developers are going to enter with their developments on international markets.

Currently, the development of UAVs in Belarus is one of the main areas of innovation. Today, Minsk has all the conditions for the education and training of highly qualified personnel. Today, the Aviation Faculty of the Military Academy of the Republic of Belarus has already opened the specialty Unmanned Aviation Systems. Future operators of unmanned systems are trained in this specialty. Also at the department of the military faculty of the Minsk State Higher Aviation College, specialists are trained who must join the ranks of the engineering staff of these complexes.

For the training of specialists and the joint development of promising samples of unmanned aerial vehicles as part of the Armed Forces of the Republic of Belarus, a specialized center for the preparation and use of BAS has already been established. In this center, the course of real use of modern UAVs is carried out by specialists from various law enforcement agencies of the country.

Ctrl Enter
Noticed oshЫbku Highlight text and press. Ctrl + Enter
We are
Park military and farmersExperimental aircraft Su-47 "Berkut"
21 comment
Information
Dear reader, to leave comments on the publication, you must to register.