President of high technology, or How “Google” made a bet on Obama

October 31 2013
17
The US military industrialists are unhappy with Barack Obama - Syria, you know, did not otdemokratizirovat "Tomahawks", and the Iranian underground objects are not bombed expensive anti-bunker bombs - but they have to blame themselves. It was necessary to make a financial bet not on the Republicans, but on the Democrats. McCain, of course, defends the interests of the military-industrial complex in Congress, but somehow it’s too clumsy: playing poker at meetings, then taking pictures of bearded kidnappers, declaring them champions of democracy. Those who financed the Obama election campaign are quite happy with life and business. 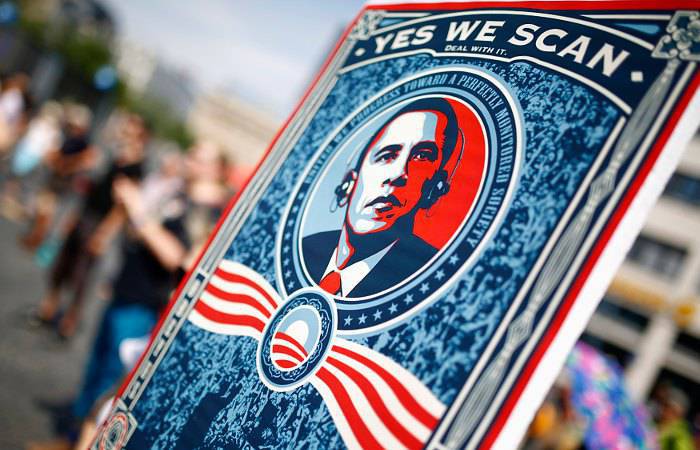 John McCain has always supported the idea of ​​a military strike against Syria. Flightless zones, missiles, financing and arming the "opposition" - in short, the full Libyan program. Resource fbii.org With reference to the “Daily Mail” kindly reminds that of the ten senators who supported the “shock” resolution on Syria, from military-industrial corporations to the election campaigns of the 2007 and 2012. McCain received the most money - 176300 $.

If this Republican prefers America to invest in the military-industrial complex, then Democrat Obama seeks to develop high technologies. “Google”, “Microsoft”, “Apple”, “Facebook” and others - they all owe something to B.H. Obama. Although B.H. Obama himself owes them something.

In recent weeks, the world has been reeling from Edward Snowden’s revelations about the very same overhearing of this very world by the US National Security Agency (abbreviated NSA). Brazil, Germany, Spain - everywhere Obama spells in the right and not quite the right diplomatic language. Dilma Rousseff is unhappy that American intelligence services listened to her phone and read e-mails, and Angela Merkel, who was also spied on, believes that Washington was not friendly with her. And in general, in the media they write that a third of the world is tapped and viewed by the NSA. Why not the whole world? This is only because not the whole world is still provided with cellular communication and the Internet.

But why NSA the whole world? Did the terrorists multiply at mouse speed?

Not. Moreover, other international terrorists, starting with Al-Qaeda, are the illegitimate children of American special services. In addition, bearded radicals are raised and lured by such long-time American Wahhabi satellites as, for example, Saudi Arabia.

And what, the NSA manages to “digest” all that amount of data that cellular operators, providers and owners of social networks throw off to it?

Also no. They don’t have time, just as they didn’t have time in the Stasi to listen to thousands of kilometers of recorded magnetic tapes. Aenbashniki themselves admit that this method of collecting information (arrays) is ineffective.

In the media they write that in Spain 60 of millions of network users was tracked. What, all these millions - a potential threat to the United States?

Again, no. Madrid did not announce plans for general mobilization or a crusade against Washington.

Barack Obama, of course, justifies himself in the political arena. Excuses, however, look very contrived. The president, they said, did not know, but he discovered that an “internal audit” was conducted and all that jazz.

RIA News" With reference to the Wall Street Journal, it was reported that the NSA had stopped listening to telephone conversations of the German Chancellor and other world leaders after an internal audit of the White House.

An unnamed US government source said that the NSA followed 35 heads of state for more than five years until the Obama administration discovered it. Now most of the surveillance programs have been discontinued, orders have been issued to close others.

An anonymous source told the Wall Street Journal that the US intelligence services are simultaneously conducting such a number of intelligence operations that it is impossible to report to the US President about each. Intelligence agencies are guided by Obama-approved "priorities" of intelligence activities. Decisions on objects by intelligence are taken independently.

What are you saying ... Isn't it funny in the 21st century to talk about the ignorance of the intelligence foundations of the US president? And this is especially funny when it immediately turns out that this supposedly unknowing person himself approved “priorities”. Is, for example, surveillance of Merkel or the president of Brazil, or the wiretapping of Iran, China - are not “priorities”? Thank God that the Obama administration has finally discovered the existence of the NSA ...

So for what is this mass surveillance carried out - on a planetary scale, which has already captured more than two billion people?

The whole thing, as in the case of McCain, in the sources of election funding. Who pays, that and orders music.

October 24 Finmarket An article has been published about IT giants who help the White House in exchange for helping the White House to them. The material contains data from the Roosevelt Institute, namely, a statistical analysis of the financing of the presidential campaign 2012 of the year, made using the latest information from the Federal Election Commission and the Internal Revenue Service.

It turned out that if big business as a whole is suspicious of President Obama, then its separate modern segment (telecommunications, high technologies, computers and software), on the contrary, is ready for Obama to cherish and nurture. (Already, by the way, weird rumors about Obama’s upcoming third presidential term have gone. Read the Military Review.)

The breakdown of support by industry showed amazing results. Obama’s support in the sectors listed above was much higher than support among American businesses in general. Candidate Mitt Romney was supported by companies from these sectors much less often.

Well, and practical results: many Obama supporters were waiting for a change in the course of national security policy, but the opposite happened: the secret citizen monitoring programs were expanded.

Summary: the political system is dominated by those companies that wish to sell information to the government that wants to buy them.

Wants? Rather, we add from ourselves, sell to the government, which has to buy this information - regardless of whether it can process and use it. Political marketing is something special and completely dispenses with market demand: here, future heads of state make offers that they cannot refuse. An analogy caught? .. Well, here. IT companies are the mafia of the 21st century. Octopus.

There is one more thing to add. In the age of cellular communication, blogs, social networks and e-mail, large corporations appeared, possessing a huge resource - information. At some point, the temptation to sell it becomes very high. In addition to information, companies also have suitable technologies for tracking and transmitting data - the development of which, by the way, is paid for by the federal budget, since the data goes to the NSA, the CIA and other intelligence agencies.

Elections, inauguration, Obama on the throne, the deal took place. Through the words of Jay Carney (White House spokesman), the president quietly issues another statement about total surveillance and wiretapping: they say the US authorities do not rule out restricting intelligence gathering. Meanwhile, NSA Director Keith Alexander blames Snowden before Congress, declaring the actions of the whistleblower unconstitutional and threatening to ruin US national security.

That's how it turned! Facebook and Microsoft are now responsible for national security. That way America will go far. The common people there will not notice how the presidential candidate will be not Hillary Clinton, but Mark Zuckerberg.

As for McCain, this hapless senator, rushing into Syria (rumored to Iran, to help Israel), is just a fragment of the past. While he is deciding the fate of Syria in Congress, playing poker on an iPhone, the NSA calls the journalists in the hall so that they do not miss the moment and take a photo of the gambler - for stories...

Ctrl Enter
Noticed oshЫbku Highlight text and press. Ctrl + Enter
We are
Results of the week. "And if we do not wipe at our William, Shakespeare ?!"Results of the week. “War is not poker! It cannot be announced when it pleases! ”
17 comments
Information
Dear reader, to leave comments on the publication, you must to register.