October 31 2013
26
Pistols, whose ancestors were submachine guns, not so much. There are several reasons for this. First of all, the submachine gun is somewhat larger in size than the pistol. He has more weight too. The location of the controls in the submachine gun is still more convenient for using two hands in operation, while with a certain training session it is enough to use a pistol with one hand (of course, excluding the procedure of cleaning and replacing the magazine). Despite this, there are a number of pistols that are converted from PP. 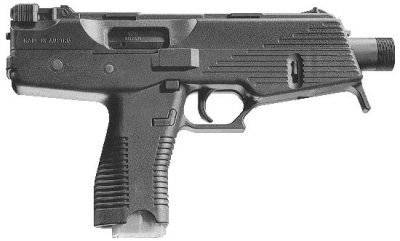 The reason for the creation of such pistols can be called at least the same poverty or rather economy. It is in order to save and create such samples: it is much cheaper to deprive an automatic fire submachine gun than to establish the production of a new pistol "from scratch". However, even this statement is controversial.

There is a second more obvious reason for creating weapon with the appearance of a submachine gun, but lacking the possibility of automatic fire, the law relating to weapons for civilians. Let me explain by example. Suppose there are certain restrictions on civilian weapons in the country that prohibit the possession of weapons with the possibility of automatic fire. However, people really want to have a submachine gun. Someone likes the look, someone just wants to have another weapon in their collection - and so on. It is for such people that the “trimmed” versions of the software are released. Of course, many well-known weapon companies do not stop the release of such weapons, after all, and this is also a profit. One example of this might be a Steyr SPP pistol.

Perhaps the most interesting point in all of this is that this gun was created as a weapon for the police, security, and so on, that is, for people who have the opportunity to use full-fledged machine guns (which is strange). You can try to risk suggesting that the reason for the creation of such weapons was banal savings, but in this direction you do not want to dig. 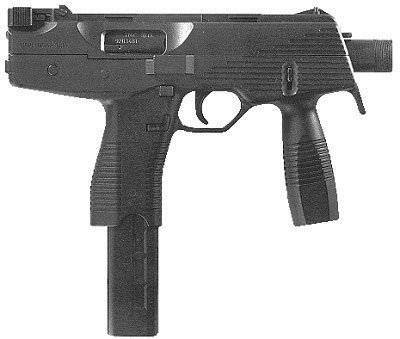 The progenitor of the SPP pistol was the TMP submachine gun. It is from him that the sample in question inherited not only the appearance, but also the almost complete device. In essence, the main distinguishing features are the inability to conduct automatic fire and the absence of an additional handle to hold. The mass and dimensions of the weapon practically coincide with the full-fledged sample of the PP, which, naturally, is not good for a weapon classified as a pistol. If you describe the appearance of a pistol, then it is difficult to select something special, in fact, the eye does not cling to anything. Above the place where the submachine gun had an extra handle to hold, there are latches that are designed to fix the two halves of the receiver. Those who are accustomed to the flag switches of the fuse, can not immediately figure out where this element is located in this product. The fact is that the switch of the fuse in the SPP pistol is represented as a slider moving transversely to the receiver. The decision is more than controversial, since, on the one hand, there is no need to duplicate the same weapon control element on both sides, but on the other hand, the location and switching is not the most convenient, although this is more a matter of habit and personal preferences. The gun has a slide delay, which is turned off using the button located on the left side of the weapon. It is noteworthy that all the movements of the bolt when firing remain within the receiver, the handle for manually retracting the bolt to the rearmost position is fixed when firing. To remove the magazine has a button on the pistol grip. Since the weapon has lost an additional handle to hold, it became possible to take up the pistol with the second hand. In order that the fingers of the shooter do not accidentally touch the barrel or are not in the path of the bullet, it is difficult to imagine, there is a small tide, which looks very fragile. Aim devices of the apparatus are classic sight and front sight. Rear sight has the ability to adjust. In addition, due to the absolutely flat surface, a seat for a collimator sight can be easily installed on top of the receiver. On the back of the weapon can be attached a belt, as well as a butt. We should also mention a very large thickness of the barrel of the weapon, or rather the part that stands for the receiver. What is it and why this size, it would be more appropriate to say in the description of the device gun. 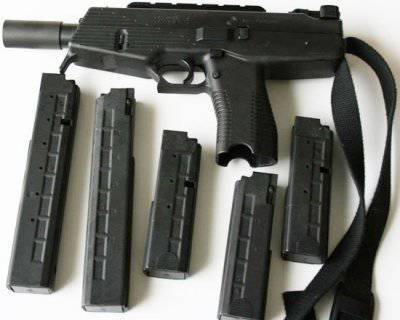 Automatic weapons built on not the most common scheme of work, the use of which requires a particularly careful selection of both materials for individual parts of weapons, and the high quality of their processing. It works all the ugliness of the scheme with the disengagement of the barrel and the shutter of the weapon when turning the barrel around its axis. That is what explains the fact that the barrel of the weapon seems excessively thick, in fact, the barrel is quite normal, and what is mistaken for a barrel protruding from the receiver is the part in which the barrel moves. This made it possible to easily use various self-locking devices such as silent firing devices. It all works as follows. In the normal position, the barrel and bolt are in the clutch in their front positions. Accordingly, the powder charge, trying to push the bullet and the sleeve as far as possible from each other, pushes the first forward, and the sleeve, squeezed between the bolt and barrel, tries to push back. Thus, the bolt, as well as the trunk coupled to it, begin to move in the opposite direction of the shot. In the process of this movement, the barrel rotates around its axis, which leads to its disengagement from the bolt. The barrel stops, and the bolt continues to move, removing the cartridge case, and also cocking the firing mechanism and compressing the return spring. After the bolt reaches its extreme rear position, it stops and begins to move in the opposite direction under the action of a return spring. Moving forward, the bolt picks up a new cartridge from the magazine and inserts it into the chamber. Facing into the breech breech, the bolt pushes it forward, which leads back to the barrel in the clutch and its coupling with the bolt. The choice of such an automation system is considered by many not to be the best, and one cannot but agree with this. Firstly, such an automation system requires a very high quality of production, and secondly, a weapon with such an automation system is very sensitive to contamination. However, it is possible to look at this weapon and from a slightly different angle. The horizontal movement of the barrel allows for a sufficiently high accuracy, and the elongated sleeve coupling in theory should protect the weapon from contamination, at least in part. 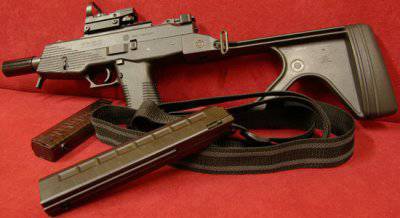 The main advantage, if it can be considered a positive feature of the weapon at all, is that it looks almost identical to its progenitor, the TMP submachine gun. It is impossible not to note the sufficiently high accuracy of the weapon, especially when using a removable butt. Store capacity is also clearly not minus weapons. This, unfortunately, the positive qualities of the product end.

Negative moments in the weapon are much more. First of all, the weight and dimensions of the gun should be noted. Since the basis of the weapon was the submachine gun, then, accordingly, the weight and dimensions remained almost the same. For this reason, the weapon turned out to be too heavy and massive for a pistol and loses in terms of these parameters pistols in the classic layout and with the usual appearance. This is the main drawback of the SPP pistol. Despite the fact that the designers made a lot of effort to ensure that the gun was less exposed to external contamination, it is impossible to call it fail-safe in any operating conditions. It is more of a weapon for the city, moreover peaceful, clean and sunny. Dirt and water weapons are unlikely to transfer, even despite the elongated barrel sleeve and other design solutions. On the other hand, the barbaric conditions of operation in general can only be tolerated by a couple of dozen samples of firearms, while other characteristics suffer.

If we talk about weapons in numbers, it turns out the following. The weight of the device without ammunition is 1,2 kilogram. The length without an attached butt is 282 millimeters, and the barrel length is equal to 130 millimeters. The maximum thickness of the weapon is 45 millimeters. The device is fed from detachable box stores with a capacity of 15 or 30 9x19 cartridges.

On the basis of all this, it is easy to conclude that a sample of such a gun will never be in demand by the police, let alone by the army. But in the civilian market there can be lovers of this exotic.