NATO is getting closer to the borders of Russia 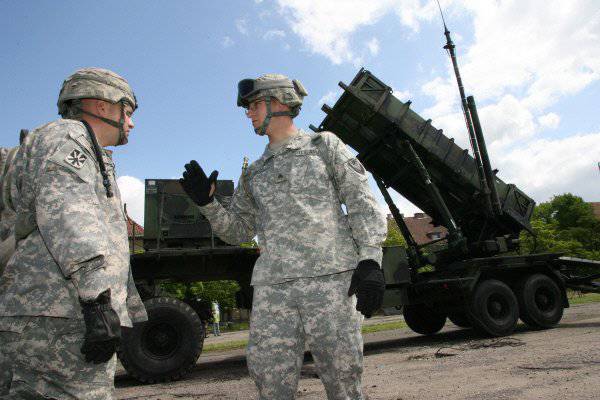 The North Atlantic Alliance is getting closer to the borders of Russia. The deployment of an anti-missile system, which will become part of the European missile defense system being created by the United States and NATO, started on Monday in Deveselu, in southern Romania. It is estimated that the missile defense system in Romania will be fully operational in 2015. The official launch ceremony of the deployment of the anti-missile defense system was attended by the US Deputy Secretary of Defense for Political Affairs James Miller, the Romanian leadership, as well as a number of high-ranking representatives of the Alliance member countries.


According to the Deputy Foreign Minister of Romania Bogdan Aurescu, the missile defense system in Deveselu is “an integral part of the strategic Romanian-American partnership in the field of security.” The anti-missile complex in Deveselu will be not only a Romanian contribution to the US European Phased Adaptive Approach (EPA) program, but also an element of the NATO missile defense system. On the base in Deveselu they plan to deploy the American multi-purpose anti-aircraft missile system Aegis (Aegis), which is equipped with Standard missile 3 (SM-3) interceptor missiles to intercept ballistic missiles. The facility will be equipped with radar stations, its personnel will be about 200 people. According to the American Embassy in Bucharest, the cost of the complex is estimated at 134 million. US dollars. In the near future, Romanian experts will carry out work on the refurbishment of the former base of the Air Force, and then the Americans will begin to install an anti-aircraft missile system and radar.

It is clear that the deployment of missile defense elements in Eastern Europe is a stumbling block in relations with Moscow. Thus, the Romanian Defense Minister Mircea Soul said that the construction of the base begins despite the lack of mutual understanding on this issue with Russia. Moscow is not the first year trying to get a clear answer about the need to build missile defense systems. However, to date, everything has been limited to unconvincing excuses about the missile threat from the Middle East. And the United States moved from talk to business. Moreover, Washington and Brussels continue to convince Moscow of the non-direction of the European missile defense system against the Russian Federation.

The other day, this problem was touched by the head of the Russian Foreign Ministry, Sergey Lavrov. According to the minister, Moscow is ready for a constructive dialogue with both the United States and the Alliance, is open to finding a compromise solution, but “we will not pretend that there will be no constant talk about all this not against Russia”. October 23 The 2013 of the year at the Alliance headquarters hosted the Russia-NATO Council (NRC) meeting. As during other meetings and conferences, Moscow actively opposed the construction of anti-missile defense elements in Poland and Romania and the promotion of NATO infrastructure to the borders of Russia. But to achieve some progress on this issue failed. NATO Secretary General Anders Fogh Rasmussen said that the Alliance and Russia did not agree on any parameters of possible cooperation in the field of missile defense. However, both sides agreed that “further consultations are the way forward.” Russian Defense Minister Sergei Shoigu started an old disc about the need for "firm legal guarantees" that the US missile defense system will not be directed against the Russian nuclear forces. Although it is obvious to all that Washington and Brussels can give a carriage and a small truck of various promises and assurances about their “peaceful” aspirations, this will not change the situation. The missile defense system in Europe is directed against the only possible threat - the nuclear deterrent forces of Russia. All the rest is idle chatter.

The United States is gradually but surely continuing the policy of putting Russia on its bases. The construction of a base in Romania began in December 2011, when Washington and Bucharest concluded an agreement on defense against ballistic missiles. Thanks to this treaty, a base is being created in Romania with the American multi-purpose Aegis SAM. The anti-aircraft missile system is equipped with SM-3 interceptor missiles, which are capable of intercepting intercontinental ballistic missiles and medium-range missiles. The establishment of a missile defense base in Romania is part of the United States European Phased Adaptive Approach (EPAA). As part of the EPAA, it was planned to create a European missile defense system in four phases: at the first stage, deploy four US missile defense destroyers in the Mediterranean Sea and radar stations in Turkey; on the second, to deploy the American multi-purpose Aegis anti-aircraft missile system in Romania; in the third year, by the year of 2018, deploy a missile defense facility in Poland; in the fourth, by 2020, to re-equip all the complexes with more sophisticated SM-3 Block II interceptor missiles with increased combat capabilities, the anti-missile must have a longer range and higher speed.

According to NATO, the US National Missile Defense System is a system of high-frequency early warning radars, tracking satellites and air defense missile systems with sea-based and land-based interceptor missiles. Anti-missiles are designed to destroy warheads of small, medium and intercontinental ballistic missiles. In the United States themselves, anti-missile sites were created in Alaska, California, and it was decided to create a third region on the Atlantic coast. The maritime component of the missile defense system is represented by cruisers and destroyers of missile defense, they are deployed mainly in the Pacific Ocean zone. In the coming years, it is planned to strengthen the ship grouping in the Atlantic Ocean. In addition, Washington is creating a regional missile defense system in Asia, along with Japan and South Korea. Missile defense should protect the United States, as well as NATO allies and forward bases from a limited-capacity missile strike. Syria, Iran and the DPRK are among the countries of threat.

Russia, it's time to answer

All such conversations and negotiations only disgrace Russia, speak of its weakness and the worthlessness of its leaders. No positive result in negotiations with the enemy is impossible to achieve! We can recall the main milestones of the negotiation process, which was started back in the USSR and led to the almost complete surrender of the national interests of Russia. The Treaty on the Limitation of Missile Defense Systems (PRO) 26 in May 1972 was a strategic mistake. It became clear when the United States began work on the creation of a national missile defense system, emphasizing its commitment to the ABM Treaty in words. When the United States had already done a significant part of the work on creating missile defense, they unilaterally withdrew from the Treaty in 2001.

In the year 1985 of the USSR, in which the “perestroika” orgy began, it declared a unilateral moratorium on nuclear testing. What for? The result is long-term harm. The Treaty on the Elimination of Intermediate-Range and Shorter-Range Missiles (INF) from December 8 1987 was in fact a betrayal of the national interests of the USSR - Russia. The main culprit - M. Gorbachev. Missiles of medium and short range are in service with almost all regional powers. In addition, such missiles could be a response to the deployment of American bases near our borders. The Treaty on Conventional Armed Forces in Europe (CFE) of 19 in November 1990 of the year is another act of betrayal of national interests by Gorbachev and his team of "rebuilders-destroyers". It would be difficult to come up with a more stupid and treacherous agreement limiting the defensive potential of Russia on its own territory.

Strategic Offensive Arms Agreements: START-1 of 30 — 31 of July 1991 of the Year; START-II — January of 1993 of the Year; START-III — of 8 of April of 2010. All agreements were more beneficial to the United States than to Russia, since they ignored the superiority of the United States in conventional, including high-precision weapons, kept the Americans with the so-called. “Return potential”, did not limit the nuclear potential of other powers, etc.

What to do? Return to the national sovereignty in the field of defense of Russia! This means a complete rejection of the talk on missile defense. It is necessary to develop national missile defense and EKO, as well as missile defense systems for potential opponents. Break all unfavorable, unequal agreements on strategic offensive arms, stop any negotiations on them. It is necessary to develop full-fledged nuclear deterrent forces. Unilaterally withdraw from the treacherous Treaty on the Elimination of Intermediate-Range and Shorter-Range Missiles. In the shortest possible time to restore the production of these systems. This is a very important decision. On the threshold - a world war. Medium and short range missiles are necessary to ensure Russia's national security.

In the future, it is necessary to stop consultations and negotiations with our potential enemies on any disarmament issues, this is a deception. To believe in the “peaceful intentions” of the owners of the West, who over the past centuries have washed the planet with the blood of tens of millions of people, is either upward idiocy or outright betrayal. Moscow should only do what provides the deepest interests of the Russian civilization and its peoples. If you want peace, prepare for war, everything else is from the evil one!

Ctrl Enter
Noticed oshЫbku Highlight text and press. Ctrl + Enter
We are
Missile defense missile defenseBasic training program for Navy SEALs and the US Navy SEAL and Army Special Forces
69 comments
Information
Dear reader, to leave comments on the publication, you must to register.