The first step to the main tank. "Triple" project K-91

October 30 2013
18
The end of the forties of the last century, among other things, was remembered by a large number of various armament and military equipment projects. Using the experience gained during the Second World War, the designers of leading countries created new types of weapons and techniques that were supposed to be used in hypothetical conflicts of the future. In the first months of 1949, the Soviet designers engaged in a new project with the symbol K-91. As part of this project, it was intended to create a whole family of armored vehicles for various purposes.

Cross-section and front view of K-91

The K-91 project was created at the Design Bureau of the Engineering Committee of the Ground Forces, led by A.F. Kravtsev. The result of the project were to be several models at once. tanks and self-propelled artillery mounts. It was assumed that the new combat vehicles will be able to replace the existing and promising heavy and medium tanks. Thus, the K-91 project can be considered the first Soviet attempt to create a main battle tank. It is worth noting that this concept was formed much later and therefore, at the end of the forties, employees of the Design Bureau of the Engineering Committee worked out the project of heavy tanks and self-propelled guns.

The sketchy design of the new armored vehicles took several months and as a result, preliminary projects of two heavy tanks and one self-propelled artillery unit appeared. An interesting fact is that the K-91 family of machines should have had a number of common units. Currently, armored vehicle families are created on the basis of a single chassis, but a different approach was used in the K-91 project. All three combat vehicles were supposed to be equipped with an X-NUMX-mm D-100T rifled cannon, paired with a DShK anti-aircraft gun and the B-46 diesel engine. Another characteristic feature of tanks and ACS K-64 was the placement of the workplace of the driver: it was supposed to be transferred to the combat compartment. This solution has significantly reduced the overall height of all the armored vehicles.

One of the projects of a heavy tank, which involved the spaced layout of the engine compartment, was most fully developed. It was assumed that the 12-cylinder diesel engine will be located in the rear of the armored hull, and the transmission units - in the front. The shaft connecting the engine to the transmission was located under the floor of the crew compartment. With this arrangement, it was possible to increase the level of protection of the crew and ammunition, which could accordingly affect the survivability of the vehicle in combat conditions. However, protection was improved by transmission elements, the damage to which, saving the crew, deprived the tank of mobility.

Longitudinal section of the first version of the K-91

The entire crew of the tank of four was supposed to be placed in the fighting compartment. The gunner’s and commander’s workplaces were placed to the left of the breech breech, and the driver and loader were to be located to his right. Features of the work of the driver led to the idea of ​​creating a turntable. With the help of this mechanism it was supposed to provide the driver with the correct orientation, regardless of the angle of rotation of the tower.

For the heavy rear engine K-91, the original tracked undercarriage was developed. The overall height of the tracked propulsion unit was relatively small, since the effective volume of the hull was almost completely placed above the tracks, and not between them. On each side of the tank it was proposed to install nine track rollers with torsion bar suspension. At the same time, only central rollers should have an individual suspension. A pair of front and a pair of rear should have been connected by a yoke fixed to the balance bar. Instead of supporting rollers in the undercarriage provided special supports, resembling skis. For proper operation of a lower thruster, a pressure roller was placed above the front support roller and designed to feed the track to the drive wheel. 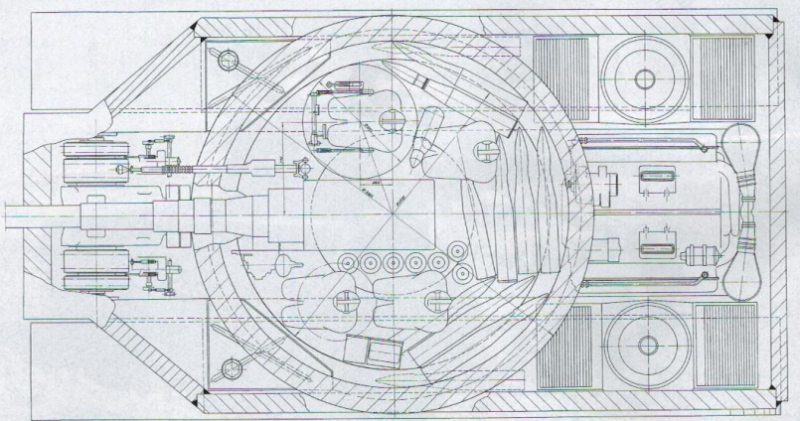 Applied layout allowed to achieve high protection performance. An interesting feature of a heavy tank with a rear engine is its relatively small height. Having a reservation at the tank level of the time, the prospective car was no higher than 2300 mm. In addition, it was possible to establish that the development of such an arrangement would reduce the area of ​​frontal projection.

The second machine, created in the framework of the K-91 project, was another heavy tank. Both heavy tanks had several common features, however, in the second project, the staff of the Design Bureau of the Engineering Committee used a number of interesting innovations. The second heavy tank was supposed to be equipped with a modified suspension, borrowed from the first project. The armament and powerplant also corresponded to the first development of the K-91 project.

The biggest appearance of the second heavy tank was the layout of the armored hull. The fighting compartment with the jobs of the entire crew was placed in the aft hull, and the front part was taken under the engine and transmission. Thanks to this arrangement, the height of the tank was reduced to 2140 mm. It should be noted that one of the ways to reduce the height was to seal the layout of the housing units. In particular, the elements of the transmission that are responsible for transmitting torque to the tracks have changed. Because of this, the diameter of the front drive wheel and the overall dimensions of the chassis have decreased. On the existing schemes can be seen that the updated design of the chassis has allowed to abandon the pinch rollers. 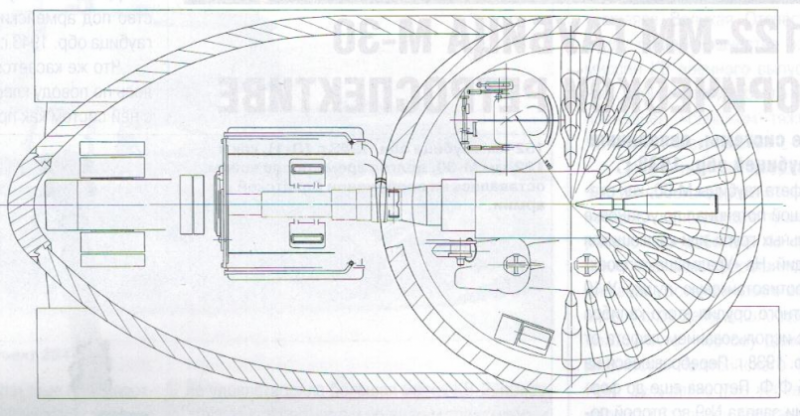 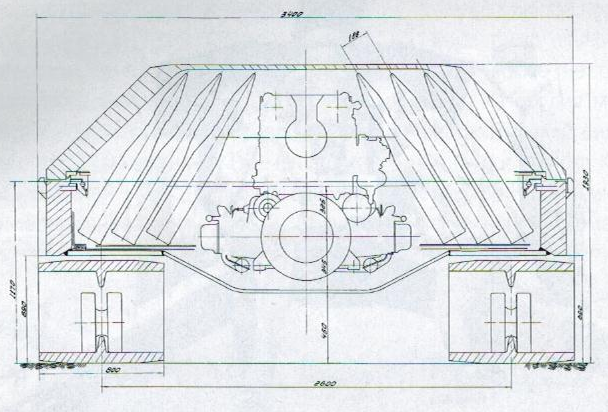 In the fighting compartment of the second heavy tank was supposed to place the crew, reduced to three people. The location of the jobs of the driver (on the turntable), the gunner and the commander corresponded to the previous project. Instead of loader in the new tank had to work automatic loader. Under the mechanized styling for unitary 100-mm projectiles took almost the entire aft part of the tower. The armament of the second heavy tank met the requirements for the family: one 100 caliber cannon and two 12,7-mm DShK machine guns. 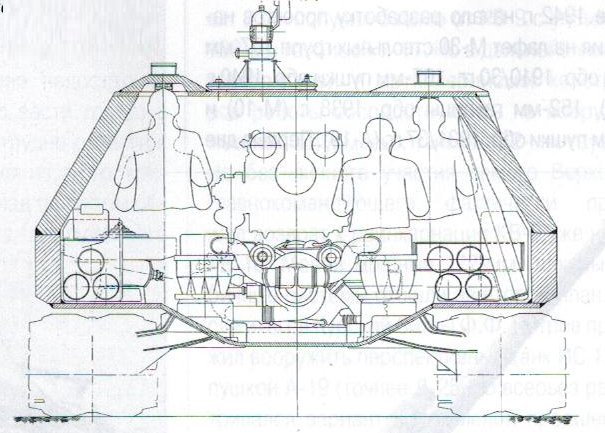 In the aft hull of the SAU, like the second heavy tank, they positioned armored wheelhouse with crew jobs and armaments. The number and placement of the crew corresponded to the first tank. Due to the complexity of the automated systems, it was decided to return to the crew of the loader. In addition, the fixed felling allowed to abandon the turntable for the workplace of the driver. Like other cars of the family, the SAU was planned to equip the 100-mm gun D-46T and two DShK machine guns.

By the end of 1949, the staff of the Design Bureau of the Engineering Committee of the Army completed the creation of three draft designs. The analysis showed that the three armored vehicles in their current form do not have any serious advantages over the existing equipment. Moreover, the completion of projects and the start of mass production of new combat vehicles took some time, during which two tanks and self-propelled guns could be completely out of date. For this reason, the project K-91 was closed for hopelessness. According to some data, separate technical solutions created in the framework of the "triple" project were used in the development of later tanks and self-propelled guns.

Ctrl Enter
Noticed oshЫbku Highlight text and press. Ctrl + Enter
We are
Family BTR-60 / 70 / 80 in combatIs the "old" well forgotten to become the "new"? Part-2. At the call of honor and duty
18 comments
Information
Dear reader, to leave comments on the publication, you must to register.