October 30 2013
60
The other day an event occurred that made us remember that there is one amazing state on the world map, trying with all its might to seem like a victorious democracy, but continuing to actually openly ignore international norms. We are talking about such a state as Estonia, systematically presenting interesting surprises.


Once again, the Estonian authorities once again gave reason to recall this small, but also extremely proud Baltic territory. But in order to understand the essence of this occasion, it is necessary to delve a little into the recent history.

Year 2009. The Arctic Sea timber hauler transported sawn timber along a used route: from the Finnish port of Pietarsaari to the port of Algeria, Bejaia. The ship itself at that time belonged to the Malta Company Malta Arctic Sea Ltd, the main shareholder of which in turn was the Finnish company Solchart. After the survey at the Kaliningrad shipyard "Arctic Sea" with the crew, which included Russians (including the ship's captain Sergey Zaretsky), the ship was sent for loading with pine lumber to Finland. From there, “Arctic Sea” set off on a previously known route, but did not come to Algeria on the appointed day. 24 July 2009 in the Baltic Sea a timber truck was attacked by people posing as drug dealers. Then begins a completely conspiracy history, all the dots above the “i” in which are not set to this day.

The captain of the ship informed the owners that some people in masks and with machine guns in their hands locked the crew in the cabins and began searching the ship, saying that they were checking if there were any drugs on the timber carrying vessel. Two sailors "drug police" were severely beaten. Dry-cargo ship was completely taken under the control of uninvited guests and stopped communicating. The owners of the vessel sounded the alarm. However, not all ... Of particular concern were representatives of Solchart, who informed the Finnish and Russian governments that the cargo ship was seized by a pirate group and nothing was known about its location.

Two weeks after the cargo ship disappeared, a signal arrived that was recorded in Portugal. This signal spoke of a new attack on a ship in the Cape Verde area. Subsequently, it turned out that one of the sailors tried to turn on the distress signaling stations that had been turned off by pirates, which was the reason for thinking about re-hijacking the ship. At this moment the ship was already actively searched. One of the vessels searching for the timber carrying vessel was the Russian patrolman Ladny, which participated in a joint operation with NATO to counteract pirates and terrorists in the waters of the Mediterranean near the Suez Canal. After receiving a distress call from “Arctic Sea”, “Ladny” went to rescue a timber carrying vessel. 17 August 2009, the sailors of “Ladny” conducted an operation to free the crew of the Arctic Sea and arrest a pirate group, whose members soon appeared before a Russian court.

Let us return to the fact that the alarm about the loss of a timber truck was not all. In particular, the representatives of the Maltese company mentioned above stated that the ship did not disappear anywhere at all, and that they knew exactly where the Arctic Sea was located ... They knew, but they didn’t guess what the ship was looking for ... Why did the Maltese owners not be embarrassed? that the cargo ship was not in Algeria at the appointed time, in the port of destination is one of the main issues of this story.

The fact that the Russian authorities were worried about the fate of a timber carrier that did not fly under the Russian flag poured oil on the fire. As if the Russian authorities should have completely ignored the fact that on board the Arctic Sea there were several Russian citizens who fell into the hands of international pirates. But their version of the activity of the Russian authorities immediately put forward the Western and Israeli media, announcing that the cargo ship, most likely, on its board was transporting C-300 complexes for Iran. True, at the same time, none of those who put forward such a conspiracy version did not bother to clarify, first, why Russia needed to complicate everything so much by carrying the C-300 to Iran through Finland and Algeria under tons of pine boards (why not “wave” through The Caspian Sea, because there is much closer and safer from the point of view of international transportation), secondly, if they were carrying C-300, then why weren’t they found on the ship, and, as they say, the cargo ship was carrying, not knowing what to do, more than three weeks ...

Returning to the beginning of the article - so where is Estonia? One of the defendants, the head of the pirate group, Dmitry Savins (Latvian citizen, businessman), said at the trial that he was ready to tell you exactly what purpose the haul truck was seized. According to Savins, the scam with the seizure of Arctic Sea was invented by Estonian citizen Eerik-Nijles Cross - the former head of the Estonian foreign intelligence service. 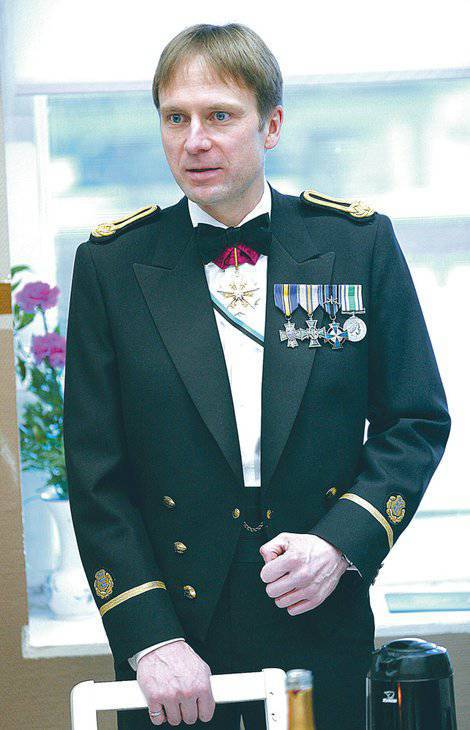 Cross suggested the idea of ​​how to discredit Russia, which by then had an active dialogue with Western European partners in the construction of the Nord Stream pipeline. At the same time, Cross said that the Russian pipeline could hamper the development of the Baltic business. They say that the Russians will be able to dictate the conditions to the Baltic states, and this is a new “occupation” on the part of Russia and everything like that. If you believe the words of Savins, then he pecked on it, obviously, wishing to get more profit. It is noteworthy that Cross and Savins were familiar with 2005 of the year, and during that time they had already managed to implement several business projects. The new “business project” was of a completely different kind - with clearly Napoleonic plans ...

Savins and his accomplices were sentenced in Russia to real terms for piracy, but Cross came unscathed. For obvious reasons, he was not on the ship, and therefore he did not appear before the court. But after Savins’s full testimony, Russia announced Eerik-Niiles Cross to the international wanted list through Interpol. Although not immediately, Interpol joined the “searches”, although it was clearly not necessary to search for a long time. Cross has been in Estonia all this time for rare departures. When Cross was “found”, the Estonian authorities immediately declared to both Russia and Interpol that they were not going to extradite him, since a) there is an agreement with Moscow not to extradite citizens of these states to each other, and b) Citizen Cross suddenly became a politician - Advisor to the Minister of Defense of Estonia, Urmas Reinsalu, and it’s generally a sin to extradite politicians ...

It is noteworthy that Cross received the status of advisor to the minister after Interpol ordered, let's say, the state that discovered Cross on its territory, to take him under arrest. It turns out that Interpol both stood in Estonia and rode - an adviser and that's it ... But Interpol didn't insist on anything: well, an adviser, so an advisor ...

But this is a precedent - now it will be possible to turn any suspected citizen of a certain state into a current politician and declare that it is impossible to extradite to another state. Everything is sewn-covered ... And the organizers of the pirate attacks, close to power, how is it still in Estonian ... The real victory of international justice is a Themis with eyes tied with a ribbon in the colors of the Estonian flag.

By the way, when were there going to sign an agreement on border recognition with Estonia? ..

Ctrl Enter
Noticed oshЫbku Highlight text and press. Ctrl + Enter
We are
Harsh Estonian weekdaysEstonian authorities offer Russia to strengthen economic cooperation and ... ask for forgiveness
60 comments
Information
Dear reader, to leave comments on the publication, you must to register.