One of the versions of the new world order: what did the famous geostrategy not consider? 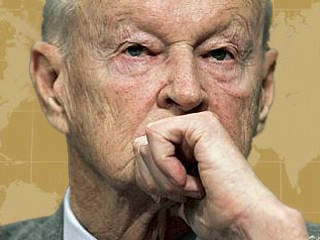 Editor’s Note: When we see the current rapid developments in the EU and the Middle East threatening traditional US alliances in Eurasia, we can only be surprised at how little attention has been paid to the domestic reader (and is still being paid!) In the last book of Zbigniew Brzezinski. But, having come out in America in January 2012, it was already released last summer in Russian ...


Perhaps internal political tension within our country did not give us the opportunity to carefully analyze this book and, raising our eyes from its lines, look at the events taking place on the international stage from a completely different, new angle. And it was then, in 2012, that everything began to change rapidly.

You can relate to Brzezinski as you like, but he clearly belongs to those authors whose opinion is simply necessary to know in order to understand the direction in which the American (and global in general) geopolitical thought works, an idea that, coming off the assembly line of the knowledge factory, tomorrow may become a new foreign reality. Moreover, this new reality is not developing without the participation of Russia. Zbignev Brzezinski is more unacceptable (neither tactically, nor strategically) considered as such an avid "anti-Soviet", "Russophobe" and generally some kind of linear "enemy". He is an outstanding producer of political thought in the West. It must be read and studied. At least for those two simple reasons that many of his predictions influenced US policy and that his views are clearly evolving, reflecting the evolution of the modern world.

That is why we decided to make an analysis of his book “Strategic Vision”, which is obviously undervalued in Russia, with a new theme for the column “Ideas”. Several materials on Terra America will be devoted to this.

Today we present to our readers the review of our regular author Alexei Kharin, who, recognizing the value of the study of the famous geostrateg, still points to those global processes and phenomena that he deliberately or accidentally overlooks the development of transcontinental ties without the participation of the United States -economic and region-civilizations that do not fit into the logic of national states and their alliances, which Zbigniew Brzezinski consistently operates with.

The last decade in the United States more and more works appear that describe the deterioration of the domestic situation in America, the weakening of its international position and the reduction of its influence on world processes [1]. In a series of such works, the last book by Zbigniew Brzezinski “Strategic view. America and the global crisis ”[2] is of separate, particular interest. The author is not only a prominent scientist, politician, but also one of the ideologues of the US foreign policy, a person belonging to the heights of the power establishment of this country.

The book will not disappoint the reader. After the introduction, which briefly describes the emerging geopolitical situation, Brzezinski proceeds to the first part with the more than saying title: "Embering West."

The Euro-Atlantic world, incapable of acting as a whole, is drooping. The situation is influenced by a global political awakening, unsuccessful moves of American diplomacy and the fall of faith in the viability of American society. The collapse of the USSR made the West a global leader, but the global crisis showed that the efforts of only a united superpower (a united West within its present limits) are not enough. It is necessary to involve new states, new global players, to expand the areas of responsibility of non-Western partners. According to the author, it was this logic that led to the creation of the “Big Twenty”.

It should be noted that Zbigniew Brzezinski himself was one of the main ideologists of expanding the outdated G-8 format to a wider one - it was proposed “G-14 or even G-16”. Another thing is that the proposal of the former Canadian Prime Minister Paul Martin to create the G-20 is not quite the same thing as the G-8 expansion.

According to Brzezinski, it is G-8, which most fully represents the West in terms of values, should expand, incorporating new countries and defining, thus, the ways of interaction in the new global world order, while G-20, in any case, is if not an alternative to the G8, then in a fundamentally different way of rebuilding the centers of power. (Ed.).

In addition, there has been a process of Asia’s returning its positions, which it had before the XIX century. China Brzezinski confidently puts in second place in the world hierarchy, but along with it, Japan and India are also working on the world stage. The statement of their rights by this troika means not only a change in the balance of forces in the world, but also “the formation of the scattered nature of geopolitical power”.

Assessing the strengths and weaknesses of Asian countries, as well as the European Union and Russia, the author makes two conclusions. The first, traditionally, is about the danger of dispersing the centers of forces and shifting away from the West, and the second, that such dispersal reflects the cultural diversity in the world more accurately (p. 39). It would seem that here it is close to the conclusion of a multi-civilization world, but in terms of “civilization”, “geocivilization” and so on. Brzezinski does not operate.

How long will such a world order last? Difficult to judge. In one hundred years, there have been five cardinal shifts in the global hierarchy (p. 39-40), and the frequency of redistribution is increasing.

The third chapter of the first part is devoted to "global political awakening." This term was introduced by Zbigniew Brzezinski in his previous work “Second Chance” [3]. Boris Mezhuyev, in his analysis of this book, expressed regret that this concept has not yet received such widespread use in political philosophy as “globalization” and “clash of civilizations”. Well, in vain!

Brzezinski examines the origins of this phenomenon (including the French Revolution), as well as the main factors of global political awakening in our day: the growth of interaction and interdependence in the world, along with the demographic predominance of young people in less developed societies. According to the author, the peculiarities of the current awakening and its first results are such that America must re-learn how to maintain the attractiveness of its system.

And so, having said this, he begins the second part, which is called the “Decline of the American Dream”, that is, in essence, the beginning of the end of this very “attractiveness”.

Brzezinski identifies the main stages of the rise of the United States to world power. The secret of the stability of the attractiveness of the "American dream", in his opinion, lies in the combination of idealism and materialism. On the one hand, a political system that protects "fundamental truths", on the other - the vast expanses of America, opening up opportunities for the acquisition of material goods. The difficulties that had arisen for two centuries could not damage the image of America. And only when she was at the top of the world, “her internal political flaws could no longer escape close critical attention” (p. 71).

In the chapter “Down with self-deception!” The author addresses six main reasons for concern:

Ctrl Enter
Noticed oshЫbku Highlight text and press. Ctrl + Enter
We are
Zbigniew Brzezinski as a mirror of American devolutionWhy the West needs Russia
27 comments
Information
Dear reader, to leave comments on the publication, you must to register.