Brazilian Corvette CV03: a project with a double benefit

October 30 2013
5
In recent years, Brazil has been doing everything possible to develop its own military shipbuilding. Now great importance is attached to the project CV03. By the end of the next 2014, the Brazilian industry should start building the head corvette of this project. In total, four new ships are planned to be built. According to current plans, the head corvette will be laid only in December 2014. However, more than a year before construction began, the Brazilian media published the first details of the project. The online magazine Base Militar a few days ago published an article with some data on the current state of the project and its features. In addition, images of the three-dimensional model of the new ship became public. 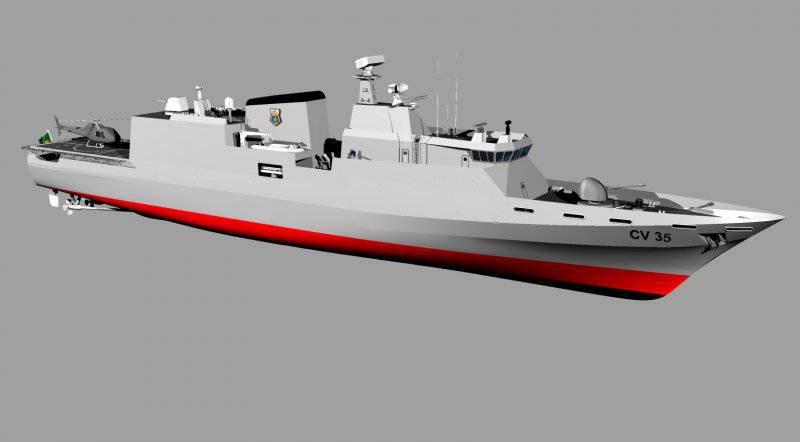 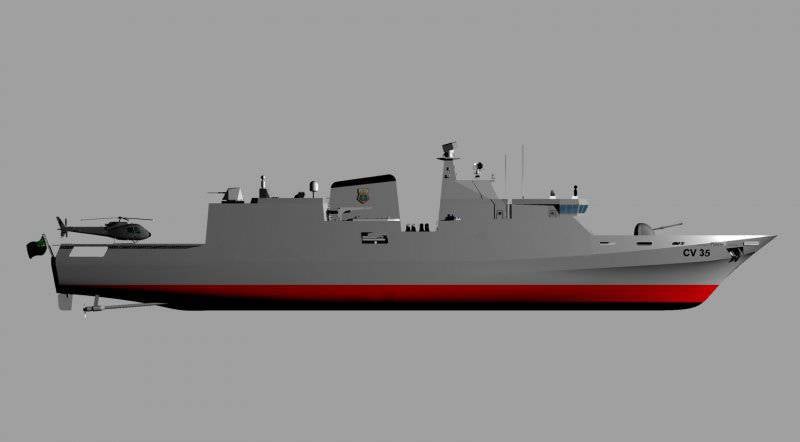 To date, completed the first two stages of the project. The ship design center of the shipyard in Rio de Janeiro defined the requirements for the promising corvette, and also formed the main part of the appearance. Now Brazilian shipbuilders are engaged in the development of a technical project, according to which new ships will be built. The work schedule has so far been determined only for the CV03 head corvette. This decision was made because of possible problems with it. It is assumed that the construction of serial ships will begin only after the head test. This will make it possible to identify the existing problems and correct them at the level of design documentation, saving the second and subsequent ships of the project from the deficiencies found.

According to reports, the new project CV03 assumes extensive use of developments and structural elements created for the previous project Barroso. In addition, part of the published information suggests that the new project is in fact a deep modernization of the old one. Thus, the dimensions of the CV03 corvette will correspond to the Barroso dimensions: the ship's length will be equal to 103,4 meters, the maximum width - 11,4 m. At the same time, due to the new layout and a number of new systems, the displacement will increase to 2480 tons. For Barroso, this parameter is equal to 2350 t.

According to the publication Base Militar, the body for the new corvettes will be fully borrowed from the previous project. In this case, it is supposed to radically change the layout of the internal volumes of the case. In the first place, the habitable volumes will undergo changes, which will improve the conditions for 185 people of the crew, squadron, divers and, if necessary, command fleet. 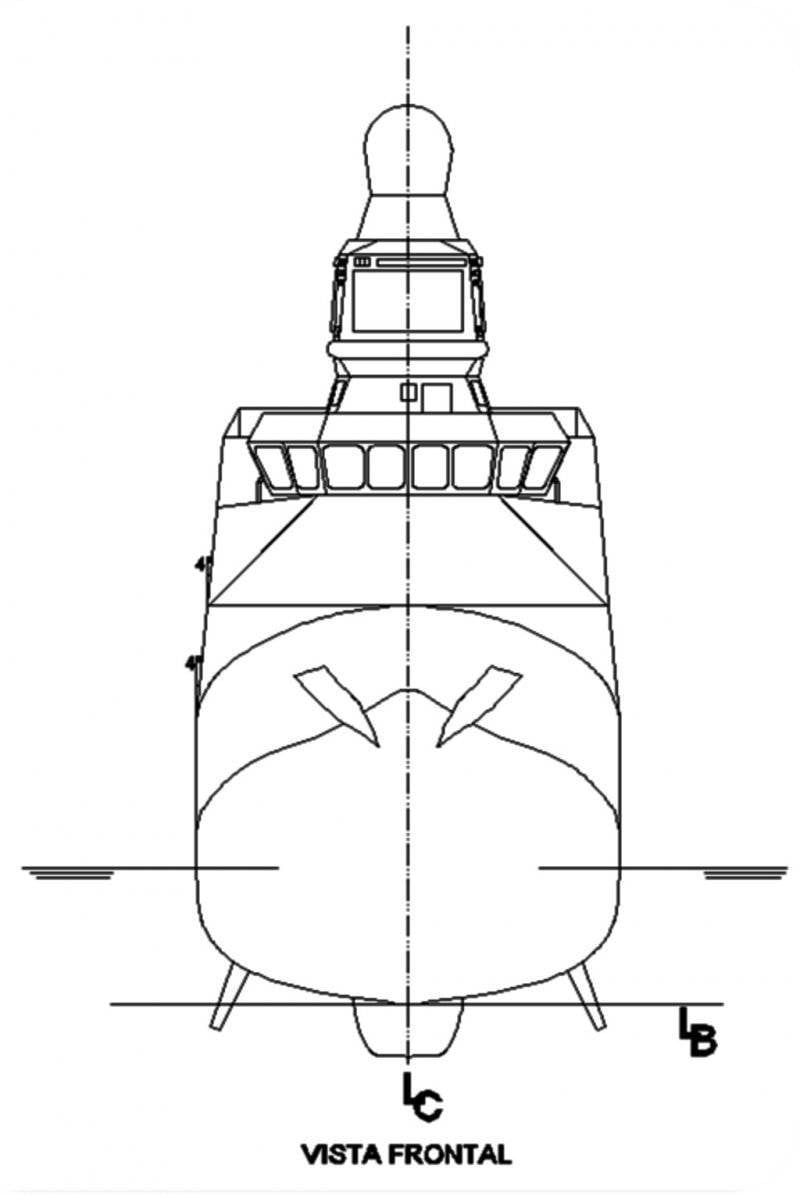 In accordance with the latest trends in global shipbuilding, the CV03 project involves the use of a superstructure with a minimum number of protruding parts. In addition, the side surfaces of the superstructure will smoothly interface with the ship's hull. It is expected that such hull and superstructure contours will significantly reduce the ship’s visibility for enemy radar systems. The requirements for the new ship indicate a more efficient use of hull volumes. Therefore, in particular, the corvette CV03 will be able to carry more aviation fuel for helicopters: it is argued that its tanks will have a total volume of 33 cube. m vs 29 cube. m at the corvette Barroso.

In the aft part of the new ship provides flight deck. Its size and location in comparison with the previous project has undergone a number of changes, due to which it will be possible to improve some aspects of the layout of the add-in. The latter is supposed to place a hangar, which requires the allocation of appropriate volumes. 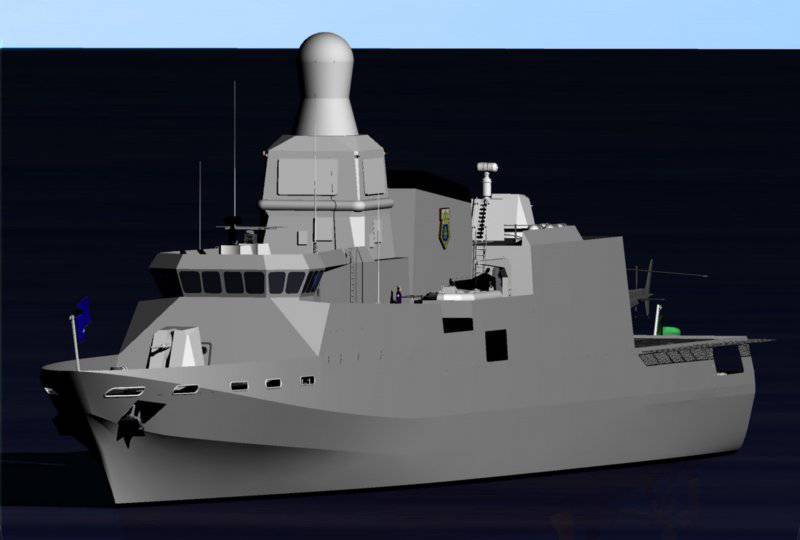 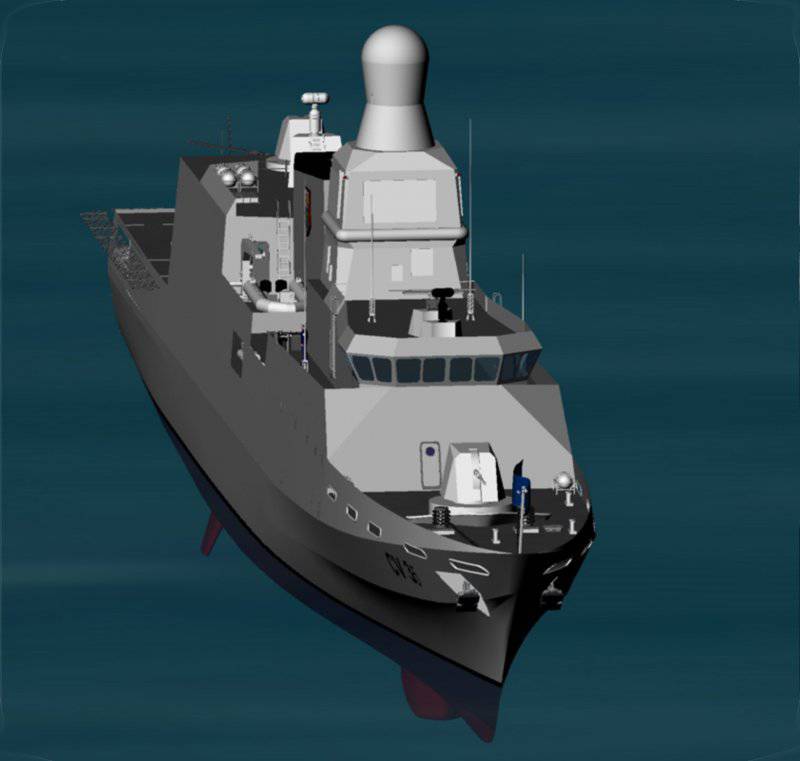 According to available calculations, at an economical speed of 12 nodes, the Corvette CV03 will have a cruising range of 6000 miles. Brazil does not have a naval base abroad, which is why range characteristics take high priority. To compensate for the lost power of gas turbine engines, it is planned to use four diesel engines at once. Such an architecture of the power plant will not only provide the required fuel economy, but also allow you to intelligently expend the engine resource using them alternately.

The artillery armament of the CV03 corvettes is currently being resolved. Prospective ships can get an English-made Vickers Mk 8 artillery mount with an 113 caliber mm gun. This system is used on the Barroso corvette and suits the Brazilian sailors. As an alternative to the British artillery installation is considered 76-mm gun of the Italian company Oto Melara. Both options have their pros and cons, because of which the leadership of the Brazilian Navy and industry will have to analyze and make an informed decision. In the rear part of the superstructure it is supposed to place anti-aircraft artillery of caliber 30 or 40 mm.

The CV03 ships will be the first Brazilian corvettes to receive an anti-aircraft missile system. It is already known that the ships will use rockets with a vertical launch, but their type has not yet been determined. Several options are being considered: the Israeli-made Barak SAM system, the American ESSM complex, the French VL MICA, and the South African Umkhonto.

Like the Barroso corvette, the new ships will be equipped with six torpedo tubes and an anti-ship missile system. Judging by the information available, CV03 corvettes will receive 324 mm caliber torpedo tubes and Exoset missiles of one of the latest modifications.

To search for enemy submarines and carry out transport missions, the CV03 corvettes will be able to carry a helicopter. During the first years of service, ships will be equipped with Westland AH-11A Super Lynx helicopters. In the future, the purchase of American helicopters Sikorsky SH-60 Seahawk is possible. For operation of American-made helicopters, it will be necessary to equip new ships with a number of special systems.

Judging by the stated dates for the start of construction of the head corvette and the available information on the progress of the project, the information on the prospective ship published by the Base Militar publication may differ from its final appearance. There is still enough time for noticeable changes to the project and updating the requirements for it. At the same time it is already clear that the project of the CV03 corvette is important and even significant for Brazilian shipbuilding. For the construction of four ships industry will have to master several new technologies that can later be used in other projects. Thus, the CV03 project will help not only Brazilian naval forces, but also Brazilian shipbuilding.

Ctrl Enter
Noticed oshЫbku Highlight text and press. Ctrl + Enter
We are
"Svetlana". History of creationBrazilian aircraft carriers. Past. The present. Future
5 comments
Information
Dear reader, to leave comments on the publication, you must to register.