Restoration of Russia's military infrastructure in the Arctic: airfields waiting

October 30 2013
52
The work on the arrangement of the once actively exploited Arctic objects is in full swing. This gives rise to declare a full-scale return of Russia to the Arctic, or rather, to that part of it, which was historically considered to be Russian. As they say, no one is going to claim someone else’s claim, but to defend one’s own is today one of the most important tasks for the modern Russian state.


The return to the Arctic, or rather, the beginning of this return is not only associated with the growing danger that a certain circle of states and supranational entities may try to arrange provocative geopolitical fuss around these territories, but also that the Arctic is gaining more and more weight with from the point of view of the service of freight traffic going from Asia to Europe and back. Russia is going to show that it is ready to defend its regional interests and offer its services (services of the Northern Sea Route) to accelerate and increase the volume of freight traffic.

The term "provocative fuss" is not mentioned by chance. The trick of Greenpeace on the Prirazlomnaya platform is still widely known. So that the next pseudo-defenders of nature did not have a desire to continue their provocative activities in relation to Russian energy (and other) projects, the “greens” with “Arctic Sunrise” decided to more closely introduce them to Russian legislation. For this “familiarization”, they chose the most intelligible way - to bring official charges under various articles of the Criminal Code of Russia.

Recently, three participants of the so-called “environmental action” Greenpeace at Prirazlomnaya were charged. The captain of the "greenpeed" icebreaker Peter Wilcox, Canadian activist Alexander Paul, as well as Ukrainian citizen Ruslan Yakushev are accused of hooliganism. According to the article 213 n. 2 (hooliganism committed by a group of persons in a preliminary conspiracy) they face up to seven years in prison.

It should be noted here that the accusatory article was originally different - piracy. And for piracy under Russian law, it threatens to 15 years in prison. The re-qualification occurred because the Greenpeace “activists” eventually failed to capture the platform. In general, the Russian border guards in a peculiar way helped the pseudo-ecologists, in time removing those from the platform and sending along with the icebreaker to Murmansk. If the Greenpeace members settled on Prirazlomnaya for a long time, then the article “Piracy” would have been fixed in the matter as the main one.

Greenpeace trick in this whole arctic stories It looks like probing the official Russian reaction. Feel, got on the tinsel, they realized that the reaction is more than serious. It can only mean that with time provocative methods applied from the outside can be improved. So that such improvement does not come as a surprise, the authorities of the country decided to actively think about control over the Russian Arctic.

In this regard, in addition to the restoration of the Temp airport on the New Siberian Islands, which the Military Observice has already published material about not so long ago, the runway on Novaya Zemlya is being modernized. 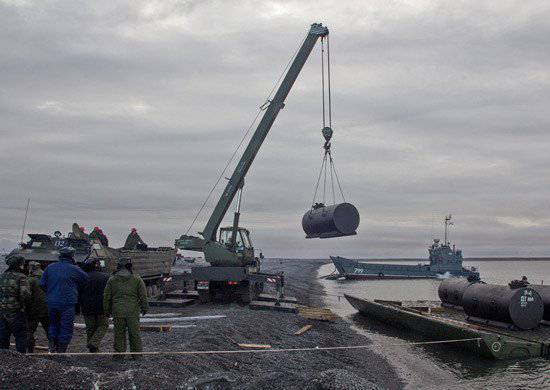 Works on the Novosibirsk Islands

The runway on Novaya Zemlya, according to the latest data, after modernization measures is fully ready to receive various transport and military aircraft. We are talking about a modernized strip of the Rogachevo airfield (Amderma-2). The double name of this airfield speaks of a dual purpose. It was used not only as a platform for receiving and sending civilian aircrafts serving the polar settlements (Belushya Guba and Rogachevo) with a total population (in 2013 year) about 2400 people, but also for military needs. 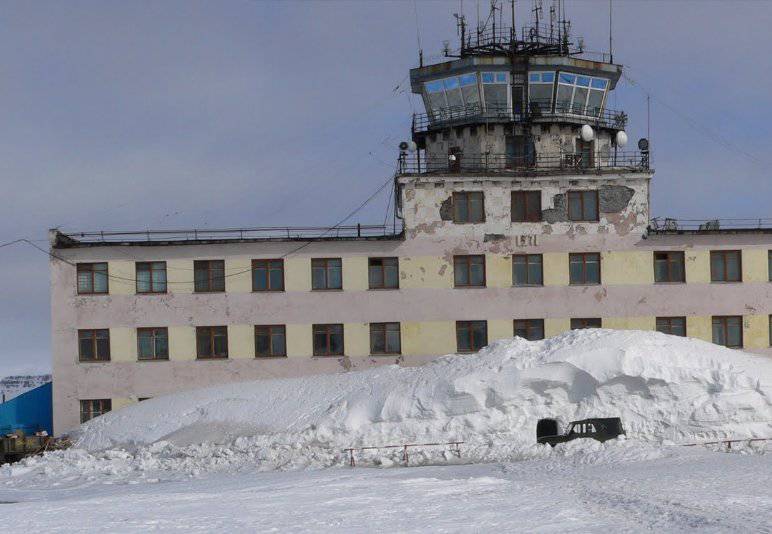 At the airport Rogachevo (Novaya Zemlya)

If we talk about the history of the airfield, then it should be noted that in the 1972 year on the “Amderme-2” the guard fighter regiment with interceptors Yak-28П took up combat duty. These aircraft in the 1987 year began to replace the Su-27.
The presence of interceptors on Novaya Zemlya was by no means accidental. The fact is that it was here that the so-called "700 Object" was located. This is the USSR nuclear test site, which in the entire history of its existence has "seen" more than 130-nuclear explosions. It was on the “700 Object” 52 a year ago - October 30 1961 of the year - tests of AN602 - the famous “Kuzka's mother” - the most powerful explosive device developed by mankind in the entire history of its existence. “Kuzkina Mother” (aka “Tsar Bomb”) was dropped on the Sukhoi Nos training ground on Novaya Zemlya by Tu-95В (crew: Andrey Durnovtsev, Ivan Tick and Valentin Brui) from a height of over 10 thousand meters. The 57-58 megaton explosion occurred at an altitude of about 4 km above the target. The Tu-95B, which conducted the bombing, returned to the Olenya airbase (Kola Peninsula) in a shabby condition, despite the fact that before the explosion, he managed to fly away from the target at a distance of more than 35 kilometers. This is not the only important event that occurred at the site. Other samples of nuclear charges were tested here, both in the air and in the ground, surface and underwater versions. The landfill on Novaya Zemlya has a rich history. 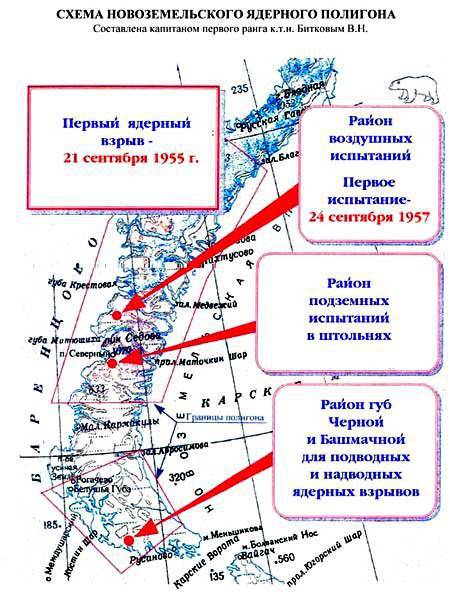 Next year, the testing ground will celebrate its 60 anniversary. Its official name today is the Central Polygon of the Russian Federation, and it submits to the 12 General Directorate of the Ministry of Defense - the 12 th Glaucus.

By the way, it is with this proving ground that one of the first acquaintances of our state is connected with the same Greenpeace organization, let's say, at a new time. In the 1990 year, after Mikhail Gorbachev turned information about nuclear tests on Novaya Zemlya into publicly available, and after the fighter-interceptors began to be removed from combat duty on the archipelago, the “greens” immediately approached. They advocated that nuclear testing be finally terminated. The tests, indeed, stopped.

Official reports today suggest that nuclear testing is not being carried out at the test site, but measures to improve the storage of nuclear ammunition are carried out systematically.

A few days ago, Russian publications came out with the information that fighter-interceptors would appear again on Novaya Zemlya. We are talking about aircraft MiG-31. Some time after the appearance of such messages in the Russian press, representatives of the main military department denied such information. However, to the question of exactly what purpose the full modernization of Amderma-2 is being carried out, no clear answers were received. In principle, refutation words from representatives of the Ministry of Defense can be understood. Even if Moscow is going to return fighter-interceptors to Novaya Zemlya, then it’s unreasonable to reveal the cards in advance.

On the other hand, there is a program that deals with ensuring the security of the Northern Sea Route mentioned in the material, which can gain strategic weight over time. In this regard, the creation of a developed infrastructure on Novaya Zemlya and the New Siberian Islands also fits into a certain outline.

In addition to the restoration of “Tempo” and the modernization of “Amderma-2”, there are also talks about the commissioning of a unique object in the Franz Josef Land archipelago. This is about the ice airfield on Graeme Bell Island - the most northern airfield of Russia. About the re-entry of the airfield, said the representative of the Ministry of Defense, General Igor Makushev.
After the appearance of information about the “re-entry” of the ice airfield at Graham-Bella, people who, until recently, were trying to preserve military facilities in the archipelago, expressed that the Defense Ministry was cunning and that the term “re-preservation” was definitely not appropriate. The fact is that the airfield, together with other military objects on Franz Josef Land, was not conserved at all, but simply abandoned along with the remaining equipment. 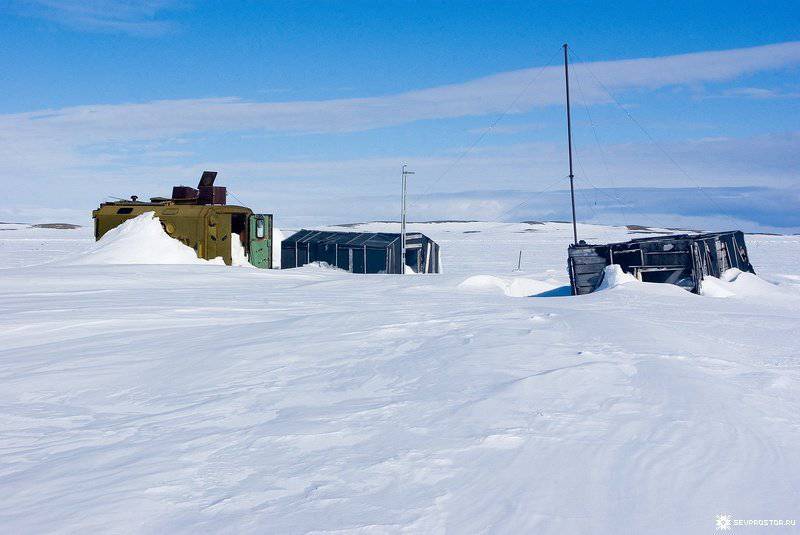 What remains of the Graeme Bell airfield

That is, in fact, there is no airfield on Graham-Bella now. That is why the runway and infrastructure here should not be “re-opened”, but rebuilt almost from scratch. Although it’s not so much in terms as it is, for what specific purposes is the restoration of all these objects being carried out, and is Russia ready to stake out its rightful place in the Arctic region? Let's hope that the goals are clear, and the work will be carried out as defined in departmental plans.

Ctrl Enter
Noticed oshЫbku Highlight text and press. Ctrl + Enter
We are
Russia is going to take away the right to the ArcticRussian Ministry of Defense took up the creation of the Arctic brigades
52 comments
Information
Dear reader, to leave comments on the publication, you must to register.