October 30 2013
93
If Qatar continues to follow the United States and even gathered, according to proven rumors, to move from war to friendship with Syria, against which the White House just decided not to use Tomahawk, Saudi Arabia does not share its enthusiasm with its neighbor and competitor. Moreover, disappointed Riyadh decided to disperse from the United States altogether. The list of reasons for geopolitical chilling is vast and will be longer than the list of the differences between characters that divorcing spouses expose to each other. 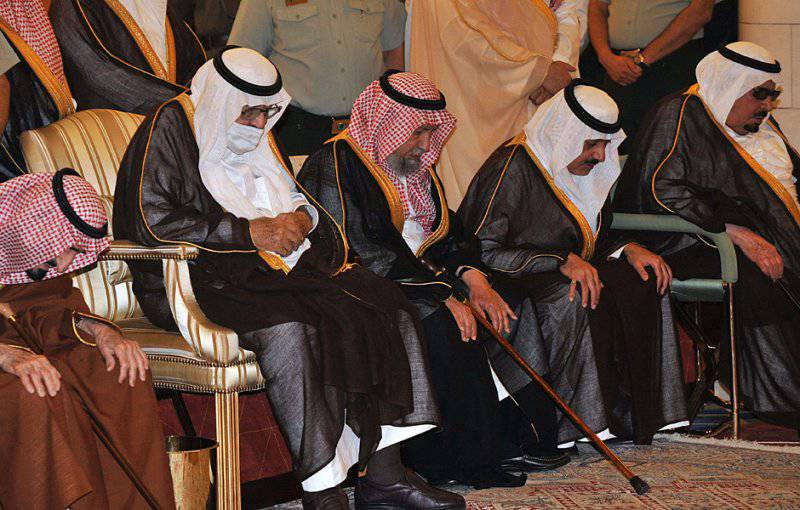 A few days ago, Prince Bandar bin Sultan announced the withdrawal of Saudi Arabia from the orbit of Washington. According to Reuters, while talking to a certain European diplomat, the prince, who works as the chief of the intelligence service, hinted at the disappointment of his homeland with the policy of the United States.

It was about Syria. It turned out that the United States is not a state that could cope with the crisis in Syria.

The prince scout does not like the fact that the White House indulges Tehran. (By the way, in the light of Obama’s stalling of the next portion of sanctions against Iran, Bin Sultan’s statement turned out to be even prophetic. And by the way: Iran is Saudi Arabia’s raw material rival.)

Finally, Mr. Scout remembered the old: in 2011, the United States did not support the suppression of the anti-government uprising in Bahrain — they did not act in the same team as the Saudis.

The Saudis demarche was relatively calm in Washington.

As the correspondent reported ITAR-TASS Yulia Romanova, the statement of Prince Bandar bin Sultan will not change the "foundations of relations" between the kingdom and the United States. This was announced at a press briefing for journalists by the deputy head of the US State Department press service Marie Harf.

Moreover, the US Foreign Office "did not receive such a message" from Riyadh, said the State Department spokeswoman. She added: “We are cooperating in solving many difficult tasks, and I would say that we are pursuing the same goals, whether we are talking about ending the civil war in Syria, returning the democratic government in Egypt or preventing Iran from obtaining a nuclear weapons. The basis of our relations and cooperation with Saudi Arabia is solid. ”

If you look into the past, the friendship of the Americans with the Saudis is really “strong”: after all, it is sealed with petrodollars. And just this year, this strong strategic "friendship" marks 40 years. Anniversary, however!

In 1973, the United States, in order to support global demand for its currency, actually created petrodollars. Between the USA and Saudi Arabia a deal was madeAccording to which every barrel of oil purchased from Saudi Arabia was nominated in US dollars. Moreover, according to the new rules, any country that would like to buy oil from Saudi Arabia, had to first exchange the national currency for US dollars.

In exchange for Saudi Arabia’s readiness to supply its oil exclusively for dollars, the United States offered it weapons and protection.

And by the year 1975 all the OPEC countries decided to estimate their own oil reserves exclusively in US dollars - and also in exchange for arms and military protection.

Thus arose the global petrodollar system, which quickly created artificial demand for the American currency throughout the world. With the further increase in world demand for oil, the demand for dollars also grew.

Austrian economist Jerry Robinson believes that the separation of 15 in August 1971 by President Richard Nixon August XNUMX was made just to get the opportunity to print and throw as many dollars into the world economy as America — with its unbridled consumption and unwillingness to save — need to.

Petrodollar system, prompts Jerry Robinson has proven to be extremely beneficial for the American economy. In addition to creating a market for affordable imported goods from different countries that need US dollars, the United States has gained more specific advantages: after all, America, in fact, now receives a “double credit” from each global oil transaction.

First, oil consumers have to buy it in US dollars. Second, the super-profits of oil-producing countries are then placed in US government debt securities, which are held in Western banks. (By the way, most of the Saudi assets that make up $ 690 billion, denominated in American securities.)

So, petrodollars provide at least three benefits for the United States: with such a system of calculations, the demand for US dollars increases; growing demand for valuable US debt securities; Finally, the system gives the United States the opportunity to buy oil for a currency that can ... be printed at will.

From here, let us return to the words of Marie Harf, and a strong friendship: “The basis of our relations and cooperation with Saudi Arabia is strong.”

Earlier, before the Saudi prince spoke with an unnamed diplomat (and maybe with several diplomats) and got into the Reuters report, Riyadh was noted in the media with another demarche: a rejection of a seat on the UN Security Council. Saudi Arabia is confident that “double standards” are flourishing in this very Council. The argument was given the Palestinian issue, which is not solved for decades. Riyadh also recalled that the Security Council did not stop the war in Syria, did not clear the Middle East of WMD, and so on and so forth. In short, the Security Council did not do all that, we read between the lines, which would be beneficial to Riyadh.

Speaking with a diplomat, Prince Bin Sultan, according to Reuters, stated that his state very soon "will significantly change the foreign policy course" and will reconsider relations with the United States. The prince’s message was that from now on Riyadh did not want to spin like a weather vane under the American wind.

Interestingly, the prince worked for more than two decades as the ambassador of his country in Washington. That is, he understands what he is talking about. He understands and with whom he speaks. If at that time (1983-2005), when he was ambassador, with the USA on the world stage could not be reckoned with, today this time has gone history. Gone forever.

Channel "RT" With reference to The Washington Post, October 28 conveyed the opinion of US Senators Lindsey Graham and John McCain, published by them in a newspaper column. Graham and McCain believe the Obama administration is losing ground in strategically important regions. In addition to the Syrian issue, senators wrote about the Middle East in general - and about Saudi Arabia in particular.

"Worst of all, the failure of the Obama administration in Syria is part of a broader crisis of US authority in the Middle East."

"According to the latest reports, Israel and our partners in the Gulf countries no longer believe in the competence, potential and wisdom of the administration’s diplomacy in this region."

Senators believe that US relations with Saudi Arabia are rapidly deteriorating, and this threatens America’s national interests. An example of deterioration is the decision of Saudi Arabia to abandon the position of a temporary member of the UN Security Council. In addition, according to a published report, Prince Bandar bin Sultan told diplomats that the decision was "a message for the United States, not for the United Nations." US senators summarize:

“Now the USA is experiencing a serious failure of its policy and a loss of prestige in the Middle East. Events in this region are developing in a dangerous direction, and there is little reason to expect that the Obama administration has a strategy to protect the interests and values ​​of the United States in this extremely important part of the world. ”

“I do not believe in any of the three arguments that they give. The explosion of discontent of the Saudi leadership is connected with the fact that America, by manipulating Saudi Arabia, does not take responsibility for the events and exposes her as a whipping boy. It all began with Afghanistan - at the request of the United States, the Saudis allocated money, sent weapons and money, created Al Qaeda and bin Laden. And when the Americans needed to get rid of bin Laden, they simply pointed a finger at Saudi Arabia, and the whole world after them believed that they were sponsors of international terrorism.

Several years ago, during the visit of a delegation of the Saudi shura (parliament) to Spain, deputies simply overwhelmed them with questions about why Saudi Arabia supported bin Laden and Al-Qaida. To which the head of the Saudi delegation bluntly said that yes, we helped them, we financed, but did so at the request of the American side, and it is not clear why today the entire responsibility falls on us, and not on the Americans. They were set up in Afghanistan, and now a similar situation is happening in Syria. ”

Riyadh felt, the analyst notes, that he was being re-substituted.

At the same time, he felt, let's add from himself, how the same rake hit him on the forehead a second time. Obviously, Prince Bin Sultan, who needs to know the American power corridors like the back of his hand, does not want to let America outplay him. It turns out, however, nothing more than a belated reaction. But who would have thought of a hundred and eighty degree turn? The Tomahawks were already ready, the carrier group was ready in the Mediterranean, Assad already “tyrant” crossed the red line drawn by Obama himself ... And suddenly the initiative of the Kremlin, the UN, the OPCW, chemical disarmament, the OPCW is given the Nobel Peace, Qatar is recorded on turn in the diplomatic reception in Damascus ... A terrible geopolitical miracle, as a result of which the Saudis are extreme.

Hey, the State Department is still some kind of "investigation" will order the "experts", and it turns out that Saudi Arabia is the number one enemy for the United States. Suddenly, Washington will learn that the Saudis do not have democracy and LGBT rights are systematically violated there, right down to the separation of the head of a caught gay from his own body. And there is not far to democratization. To privatize Saudi oil is the dream of every decent industrialist, especially one who knows how to spread rumors about the benefits of shale oil production in America.

Prince Bandar's late demarche. Qatar managed to dress up in the clothes of a peacemaker, Washington always insured itself with gosdepovskimi statements about the heterogeneity of the Syrian opposition and that he has no clear idea about the opposition, but has only an idea of ​​democracy, but Riyadh (like Ankara), not hesitating, armed and financed militants fighting against the Assad government, and is now doing the same. Saudi Arabia was in the role of extreme. Number one terrorist-Wahhabi is about to be pointed. According to weather forecasters, the Arab Spring is expected in Riyadh ...

Ctrl Enter
Noticed oshЫbku Highlight text and press. Ctrl + Enter
We are
B.H. Obama as a failed presidentResults of the week. "And if we do not wipe at our William, Shakespeare ?!"
93 comments
Information
Dear reader, to leave comments on the publication, you must to register.