The second General Staff of the country will not pull

October 30 2013
58
The question whether the formation of a national center of defense of the state in the defense ministry of the Russian Federation is appropriate remains open.


Recently, there has been an active discussion on the topic of creating a new, so-called Head Office of the Ministry of Defense of Russia and the National Center for Defense Management of the State (NCUOG) within the Ministry of Defense of the Russian Federation. As you know, any control system consists of three main components: organs, points and controls. In this regard, the question arises: what will this NTSUOG be, in relation to the entire Russian military organization, for the construction of which large enough state resources are already being spent?

If we talk about the content of the NTUGS, that is, its organizational structure, composition, tasks and functions, this is the authority of the Supreme Commander-in-Chief of the Armed Forces on the issues of the country's defense. It will be located at one of the command and control centers set up in the Russian Defense Ministry with the so-called situational center specially equipped with modern technical means, which is, according to some bold statements, a real “electronic Security Council” of the Russian Federation. 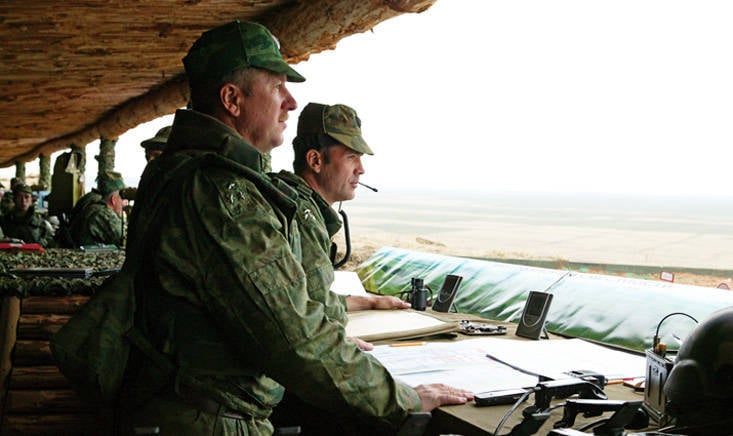 It should be noted that directly in the Ministry of Defense a long time ago already exists and effectively in a regular mode the same national authority as the newly created National Center for Humanitarian Affairs, as a whole with the same tasks, functions and organizational structure, the state defense management body under the general supervision of the Supreme Commander of the Armed Forces.

This is the General Headquarters of the Armed Forces with the Central Command Center of the General Staff of the RF Armed Forces and the Situation Center of the Russian Defense Ministry, which already today is solving strategic tasks in the interests of the entire military organization of the state, related not only to the country's defense, but also to ensuring mainly military security, as well as partly public and even state security of the Russian Federation.

So what is this created NCUOG - is it a repetition of everything that already exists only at a new technological and hardware level? But then, how is it provided for and does it provide for the solution of one of the most difficult tasks associated with the implementation of sharply increasing demands on the sources of information that should be received by this innovative NCUOG?

Is the development of new functional software for automatic control of rocket-space defense and strategic nuclear forces in combat cycles and automated management (rather than simple supervision) of the military, special and supporting forces and general-purpose equipment of the entire military organization of the state, starting with the adoption of management decisions and ending with the control of their execution?

Is the depth and degree of technical development of this project sufficient according to the “cost-effectiveness” criterion in the designated so short timeframes for creating the NCUOG - 2014 year?

Is the operational-strategic and technical training of specialists for service and work in the newly established control body of the entire military organization of the state organized and how?

At the same time, no one doubts, or even officially enshrined in the National Security Strategy of the Russian Federation, that the military organization of the state today is undergoing significant qualitative changes and is developing towards the creation of the so-called triune system of ensuring the national (military, state and public) security of Russia and defense of the country under the general leadership and direct control of the President of the Russian Federation - the Supreme Commander-in-Chief of the military and special forces perazim (ie not only the armed forces, but also by other troops, military units, agencies, military and special forces of the state, intended for the Russian Federation and the country's defense of national security).

The main and primary task in the formation of this triune system is the creation of an appropriate national, supra-departmental, permanent staffing body, not to imitate the turbulent apparatus bureaucratic activity, endless conference calls showing on all TV channels (although this is sometimes necessary) and irresponsible curating, but personally responsible, professional, operational and administrative state management of all processes of creation, production, functioning Nia and operational and strategic use of all the components of a three-pronged system of ensuring the national security of the Russian Federation and the country's defense.

Considering the above, the center being created should be organizationally, technically and algorithmically (for individual types of weapons and equipment) linked into a single system with various staff and non-staff so-called national centers, committees, councils and working groups that are being created today in ministries and departments each of them has its own departmental task in the interests of the entire state.

To this end, it seems expedient to concentrate the relevant resources of the country and direct them today primarily to create in the presidential administration of the Russian Federation a permanently functioning Supreme High Command of the state’s military and special operations with its staff super-departmental management body, the Joint Headquarters or, in other words, the National Command Center activities of all components of the triune system of ensuring state, public, military security th Federation and the defense of the country under the overall supervision and direct control of the President of the Russian Federation - the Supreme Commander of the Armed Forces, other troops, military formations and bodies of state special services (see 1 and 2 schemes.). 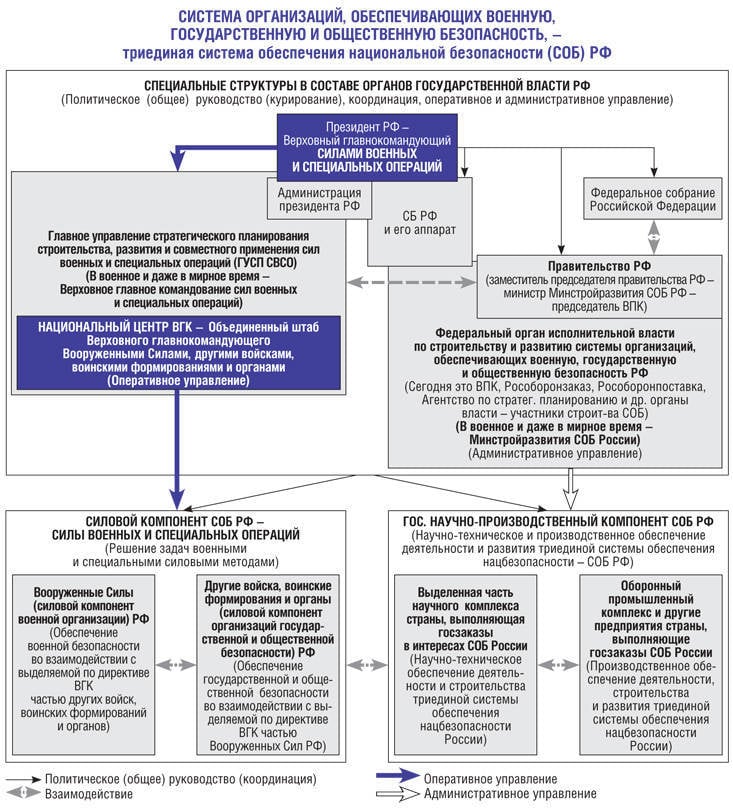 As an option, the territory and facilities of the Russian Ministry of Defense on the Frunzenskaya Embankment with relevant additions and changes to the Head Office of the Ministry of Defense of Russia and the next so-called National Center for Defense Management of the State today are actually used as one of the most suitable places and objects. 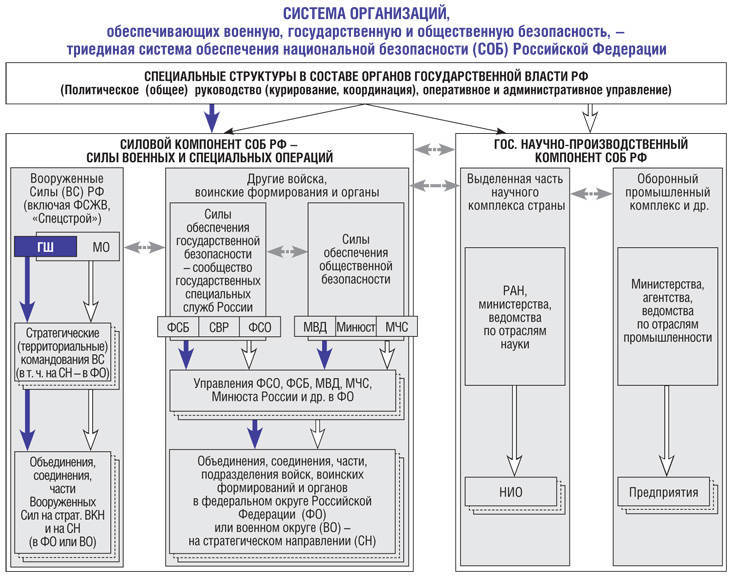 This option will require the active participation of all ministries and departments involved in joint actions to protect the national interests of the Russian Federation from threats and challenges in the provision of state, public and military security of the state and national defense. It will be necessary to carry out additional design, refinement and interconnection of departmental control centers with the created management body of the Supreme Main Command (VGK) and with each other in order to form one of them in the full sense of a unified management system.

In this case, of course, it will also be necessary to change the very name of the main object being erected on the Frunze Embankment in order to bring this name in full compliance with the content. For example, for ease of use in the media, this object can be called briefly - the National Center of the Supreme Command for managing the triune system of ensuring the national security of the state and the country's defense. Naturally, the whole NTSUOG will be included in its composition as a separate component.

It is advisable to start forming such a National Center for Civil Aviation with the advancement of the construction of the facility itself already from the most trained, experienced managers serving in the highest echelons of state and military administration and well representing the entire system of state and military construction and ensuring national security. At the first stage, their main task should be to thoroughly study and issue a technical assignment for the development of this very complex, resource-intensive and responsible project, and then to organize the outline design and create both the center itself and the whole system of managing the state’s military organization. .

By the way, the training and advanced training of specialists for service in this command body of the Supreme Command and in other established supra-departmental state national bodies, centers and control points of the operational and strategic level of the triune system of ensuring the national security of the state and the country's defense can be already organized at the Military Academy of the General Staff Armed Forces (BA GSH), renaming it respectively the Military Academy of the Supreme High Command of the Armed Forces, other troops , Military formations and bodies of state special services (VA VGK).

Such an approach to the creation of the National Center for the Supreme Command will, in general, allow for the construction of an effective unified management system for the entire military organization of the state, including not only power, but also research and production components, although it will increase the time it takes to be commissioned compared to the time limits set for NTUOG . However, taking into account the work already done on the creation of the NCUOG, this increase in time may be insignificant.

Thus, on the basis of the General Staff of the Armed Forces of the Russian Federation with the share participation of all the power structures of the state and the defense industry complex of the country, it is possible in a relatively short time and with an insignificant expenditure of additional budget funds and state resources to create a full-fledged, permanent so in wartime, the Supreme High Command for the operational management of the Armed Forces, other troops, military formations and bodies, that is, the so-called forces of military and special operations, as well as all state scientific and production components of the triune system of ensuring state, public and military security of the Russian Federation and the country's defense (see the 1 scheme).

Ctrl Enter
Noticed oshЫbku Highlight text and press. Ctrl + Enter
We are
Extremely fastMilitary reform as an integral part of the security concept of the Russian Federation: Systematic dynamic assessment
58 comments
Information
Dear reader, to leave comments on the publication, you must to register.