October 31 2013
40
Here I like the Su-27, as well as all its subsequent modifications.
This is an amazingly beautiful car, and the most important thing is that for all the time that I see them, I am still not indifferent to them ...

Su-30CM - (serial upgraded) Su-30МКИ (modernized, commercial, Indian), designed for the Russian Air Force.
The first flight of this machine took place in the fall of 2012 ... 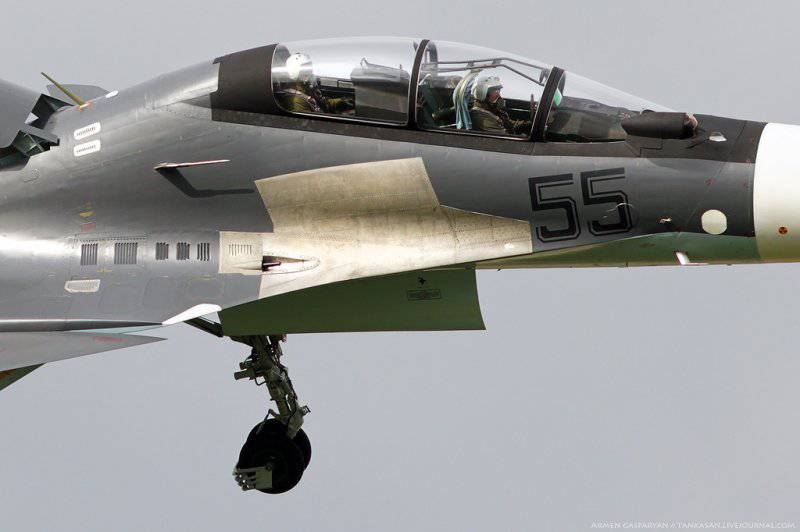 Su-30KI, as a basic platform for a multipurpose heavy fighter, is interesting primarily for its versatility. The so-called "open airborne architecture" was successfully implemented on it, which makes it relatively easy to incorporate new systems into the electronic equipment and use new guided weapons from it (including from different manufacturers). It took him to put together the Russian radar and the optical-location station, the French navigation system and the display system on the windshield, the Israeli radio-electronic warfare and sighting systems, as well as Indian-made computing systems ...
2. 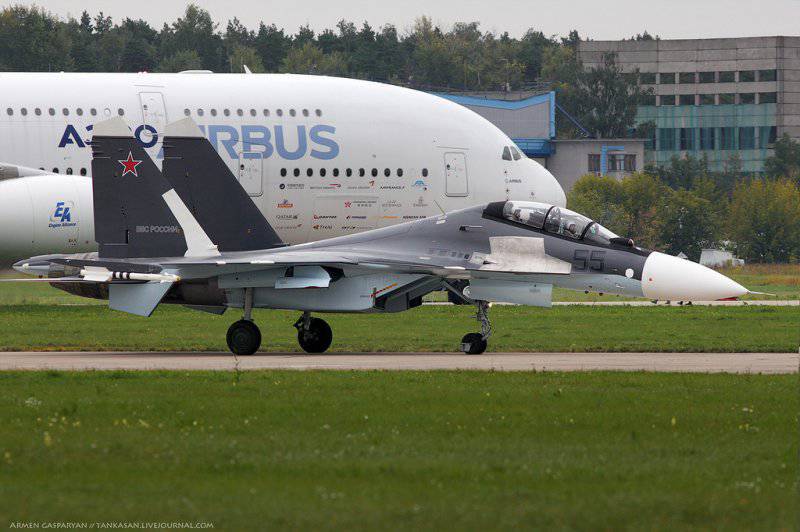 The export machines of the “thirtieth” family, which grew out of the “Chinese” line, were built according to the logic of the “bypass channel”, when the new systems were mounted on board in parallel, without full integration into a single complex. Most likely, it is the ease with which the Su-30MKI platform can be used to use various weapons and equipment, and attracts the military. The attractiveness of the capabilities of a multi-purpose aircraft, which is quite easily transformed into both a shock fighter-bomber and a heavy interceptor of air defense, is confirmed by at least the composition of those who are interested in its “internal” analogue Su-30CM ...
3. 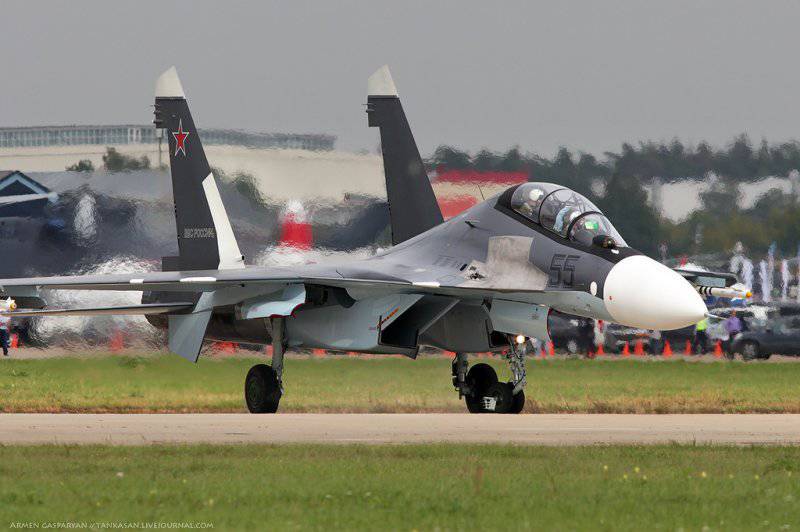 The choice of Su-30MKI has one more, very simple explanation. This aircraft in Irkutsk has been rhythmically produced for more than ten years (and the first Su-30K for the same India were released by Irkut as early as 1997), it is completely mastered in production, the technology at the plant is "licked". And this is transformed into release dates, product quality and - not least for the current leadership of the Ministry of Defense - its cost. It’s one thing when 30 machines are ordered from you, and for that you need to rally the plant in place, debug (or even re-develop) the technological process, purchase equipment and equipment, and also collect personnel. (There are such plants in Russia, and it is still not very clear what to do with them: it is expensive to start up in non-rhythmic work in small lots, but it’s a pity to throw out). Another thing is when an enterprise stamps up to standard cars for years, and It is relatively easy to embed an issue of a "corrected" modification for your Air Force into this export stream. The unit costs of producing such a "side" series are plummeting ...
4. 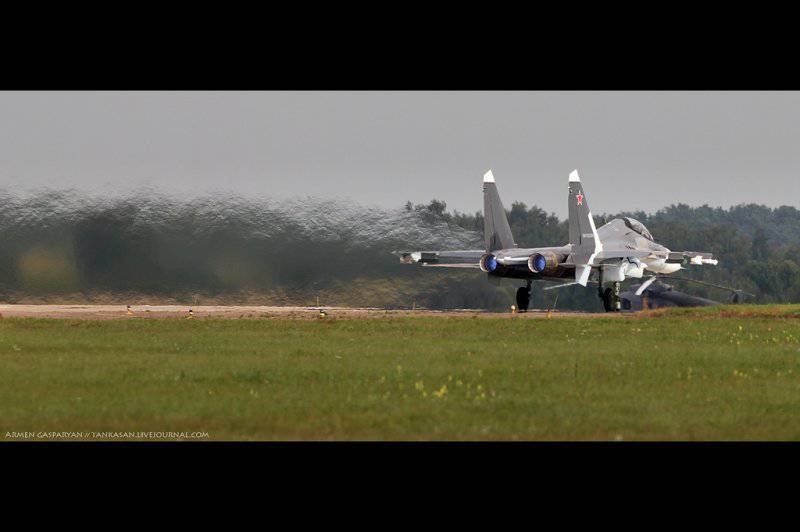 The first contract for 30 Su-30SM fighters was signed in March 2012. Earlier, the Ministry of Defense was going to buy 40 such aircraft, of which 28 were supposed to be transferred to the Air Force. Another 12 were proposed to transfer aviation Black Sea fleet to replace obsolete Su-24 bombers.
The first two fighters "Irkut" put the Russian Air Force 22 November ...
5. 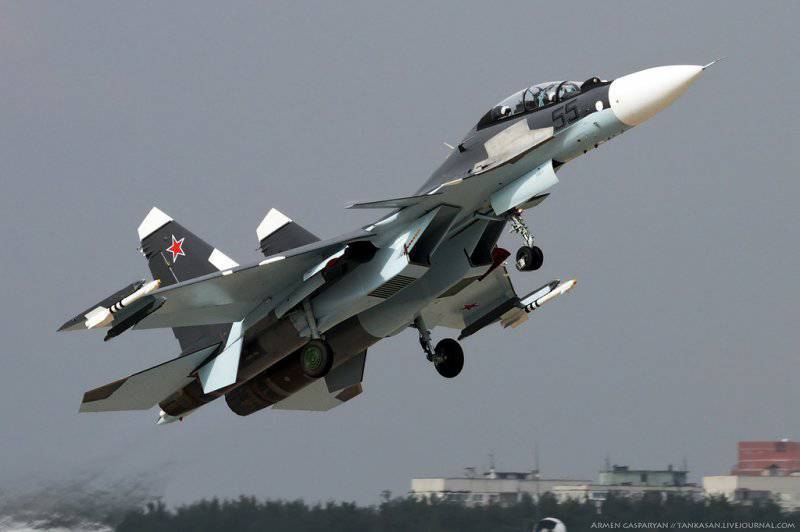 Su-30M with their unique fighting qualities today allow you to create compact aviation groups that are equally well adapted to fight the air, land and sea enemy ...
6. 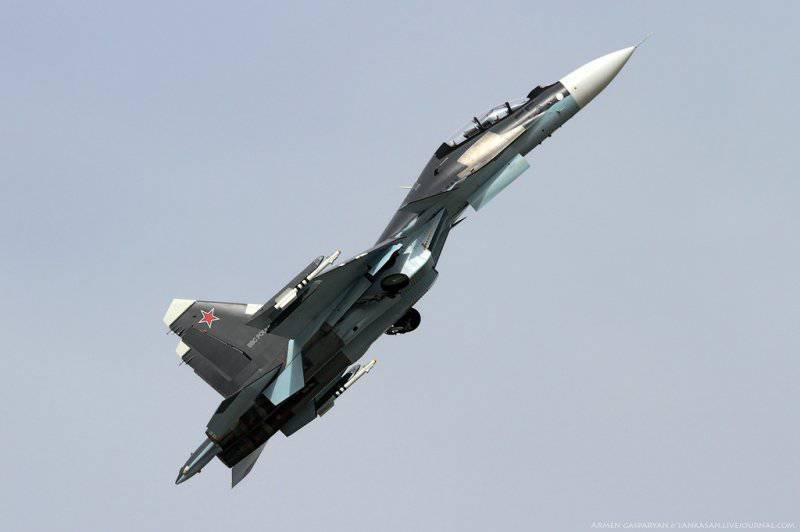 As part of the MAKS-2013 air show, the pilots of the aerobatics aviation group “Russian Vityazi” carried out familiarization flights on Su-30CM. During these flights, complex aerobatics were performed to familiarize with the unique super-maneuverable capabilities of a fighter. The pilots gave a high assessment to the aircraft performance ...
7. 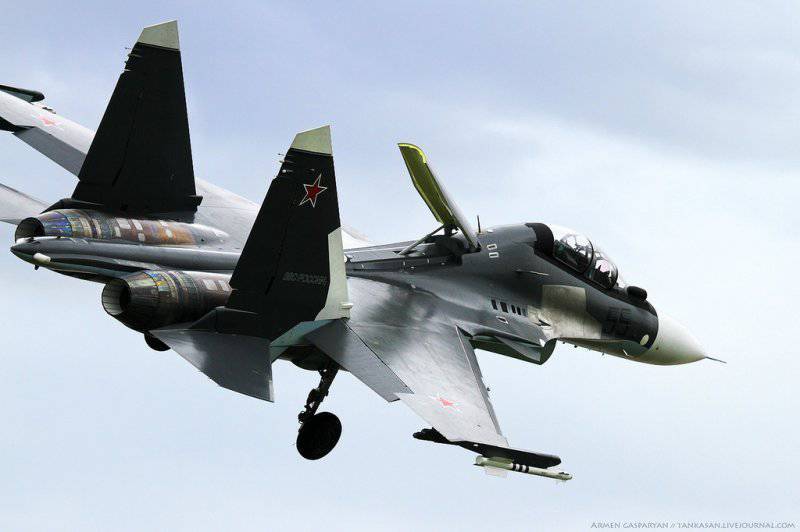 Put Su-30SM on the wing of the Hero of Russia test pilot class I Vyacheslav Y. Averyanov.
Vyacheslav Yuryevich has always experienced "drying" - from the old Su-17 to the newest Su-35. His authority among fellow profession has always been unquestioned!
It surprisingly combines the ease of piloting and the most accurate calculation of any, even the simplest flight ...
8. 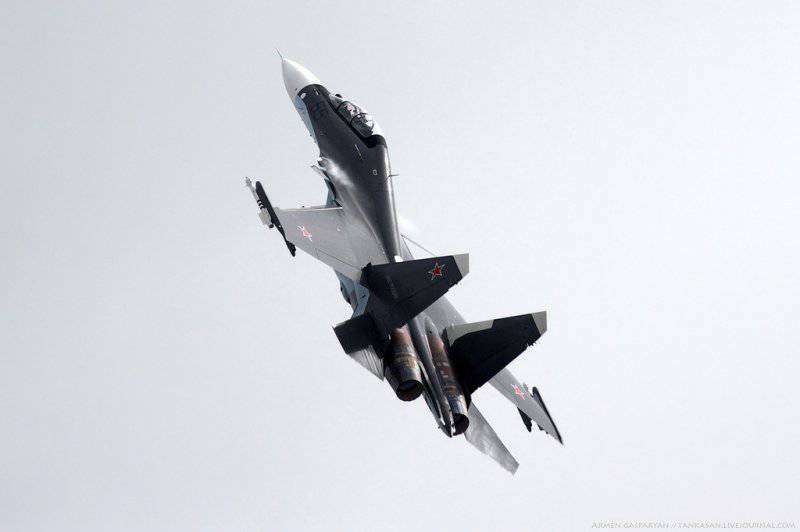 This year at the air show he performed a wonderful and beautiful aerobatics with his son, Eugene ...
9. 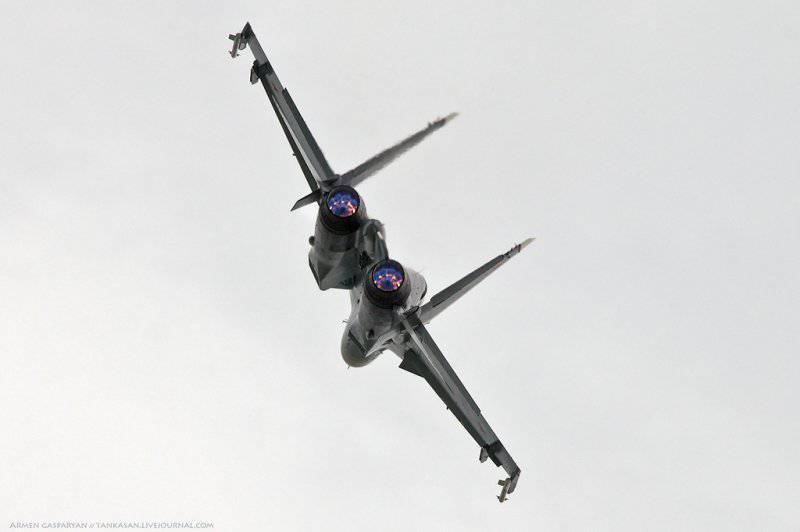 Perspective aircraft of the Russian Air Force, such as the Su-35C and T-50, have exclusively single-seat cockpits. The task of the primary training of pilots for them allows to solve the newest Yak-130. However, pilot training goes far beyond flight training and weapons. When it comes to the transfer of combat experience, the development of air combat tactics with the actual use of the entire arsenal of weapons, two-seater combat vehicles may be indispensable ...
10. 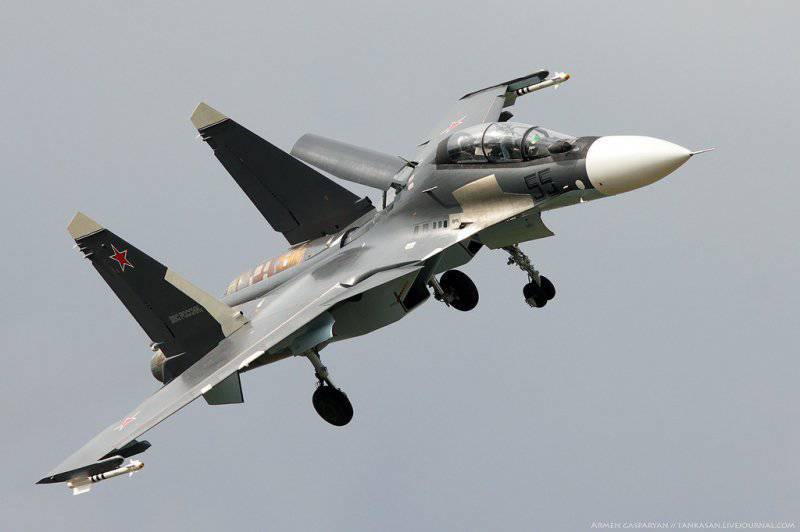 The Su-30CM, as well as the Su-35C and T-50, are super-maneuverable fighters with controlled vector thrusters, which are currently not in service with the Russian Armed Forces. It is obvious that the double Su-30CM will allow in a shorter time to prepare a sufficient number of pilots for the Air Force, able to control the machines of the next generation ...
11. 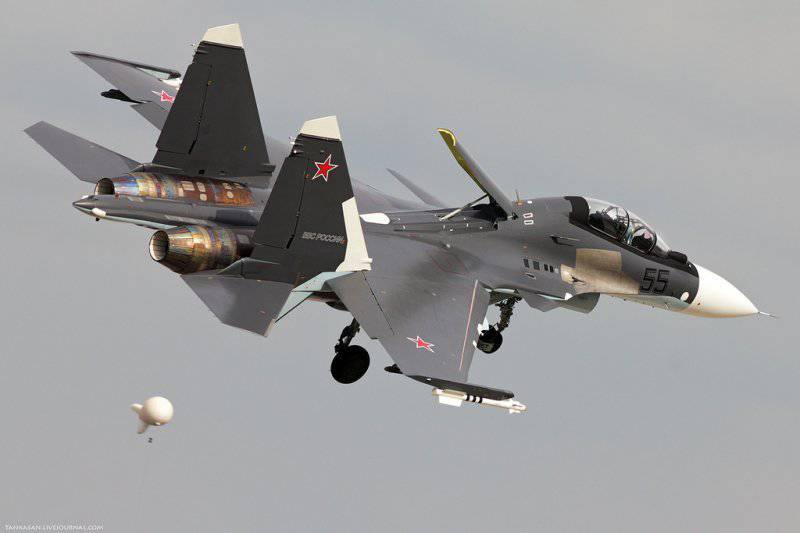 19 December 2012 of the Russian Ministry of Defense and the Irkut Corporation signed another contract for the supply of the second batch of 30 vehicles to the Air Force combat units ...
12. 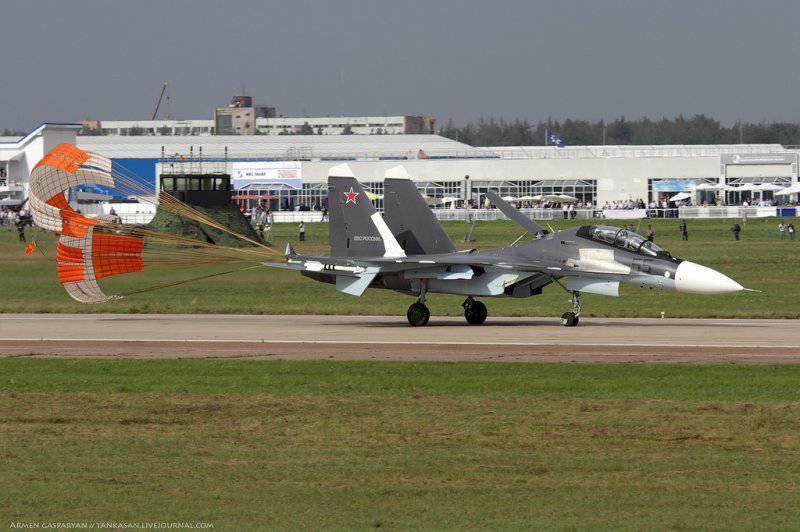 As of today, combat units of the Russian Air Force have already received 5 vehicles under the signed contracts ...
13. 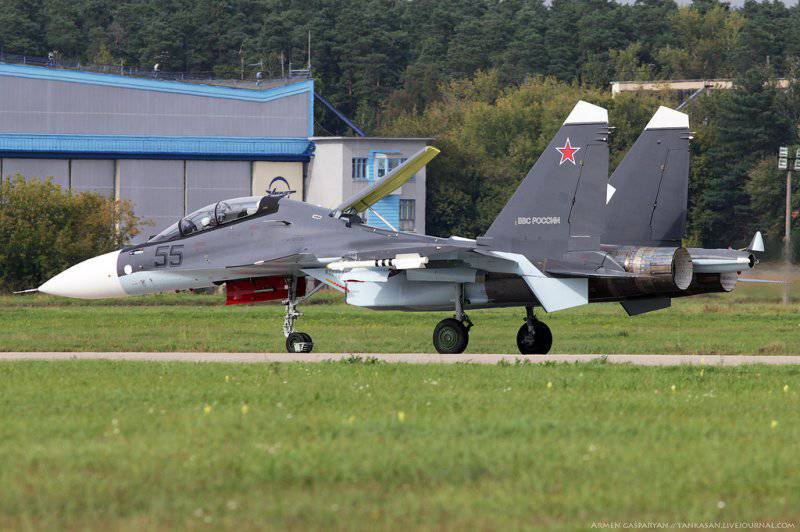 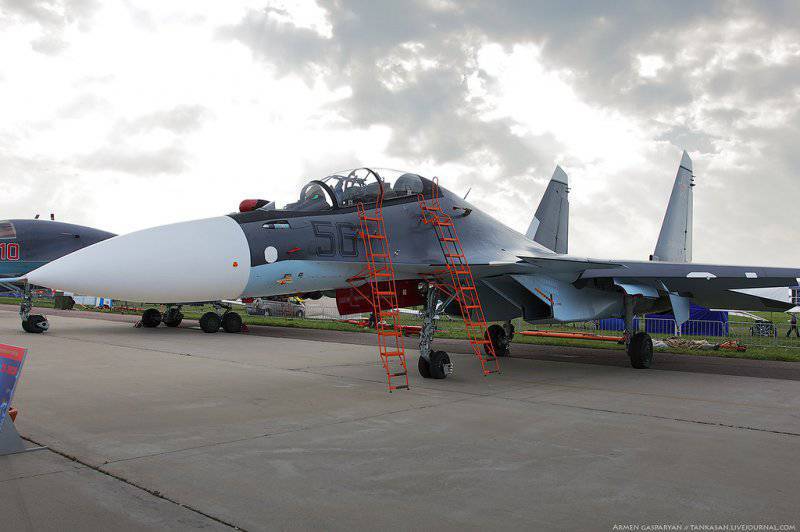 Ctrl Enter
Noticed oshЫbku Highlight text and press. Ctrl + Enter
We are
The production process of the Su-34 fighterPhoto report from MAX 2013 (Demonstration Flights)
40 comments
Information
Dear reader, to leave comments on the publication, you must to register.