In 2013, the Russian Air Force received more than 30 new helicopters 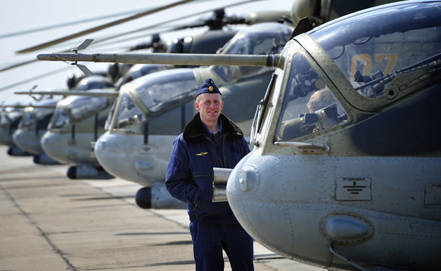 In army units aviation This year, the Russian Air Force received more than 30 new combat, transport and training helicopters, and by the end of the year several dozens of such aircraft are expected to be delivered to the troops. This was announced by ITAR-TASS official representative of the Air Force Colonel Igor Klimov in connection with the 65th anniversary of the creation of army aviation of the Air Force celebrated today.


"Currently, the Air Force has one of the best helicopters in the world: Mi-24, Mi-35, Mi-26, Mi-28H" Night Hunter ", Mi-8 and its modern versions, Ka-50" Black shark "and Ka-52" Alligator "," Ansat-U ". Intensive repair of the helicopter fleet in operation continues, thanks to which over the 70 rotary-wing aircraft have arrived in the Air Force part of the repair production units of the military-industrial complex this year.

"With the active provision of combat training activities in the interests of all types and genera of the Armed Forces of the Russian Federation, the intensity of the raid of army aviation pilots this year increased by 15 percent from the 2012 indicators of the year," the Air Force representative said. He recalled that the Mi-28 combat helicopters had created the only Berkuty aerobatic team in the Air Force, which was carrying out demonstration flights with elements of aerobatics.

The further development of army aviation involves the entry into the troops of new aviation technology, to which demands are being made to improve flight tactical characteristics and the effectiveness of the use of fire weapons, said Klimov.

The state armament program before 2020 of the year provides for the release of about 1 thousand new helicopters for army aviation units.

Ctrl Enter
Noticed oshЫbku Highlight text and press. Ctrl + Enter
We are
Results of the week. “Look, the whole face is black! Have you ever read Moidodyr? ”Russian Helicopters Holding will present at the Army-2015 Forum new models of military helicopters: the marine version of the Alligator helicopter, the Night Hunter with dual control, the Mi-8AMTSH-B and light Ka-226T
48 comments
Information
Dear reader, to leave comments on the publication, you must to register.