Middle Lithuania as a seed of contention 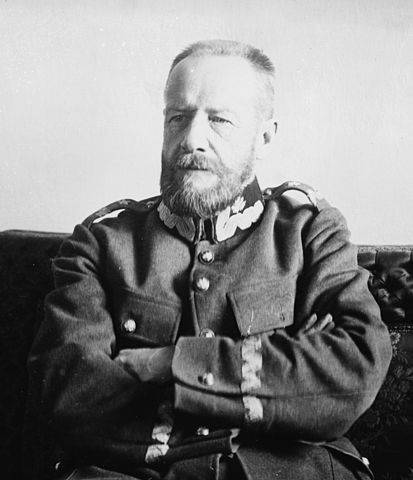 93 a year ago, in October 1920, in Eastern Europe, on a part of the territories of modern Lithuania and Belarus, a second Polish state emerged, formed as a result of territorial seizure and called Middle Lithuania (Litwa Środkowa). It existed from October 1920-th to March 1922 of the year. And although the national composition of this territorial-political entity was not purely Polish, the Poles constituted 70% of the population, and the Lithuanians represented the second largest population group — in the ideas of Warsaw, which started this adventure, “Median Lithuania” would have forever become part of Poland ...

The direct executor of this plan was General Lucian Zeligovsky (1865-1947). The seizure by the Poles of a new territory, and above all Vilnius (present-day Vilnius), was staged as a “revolt” of the Zeligovsky division that had come out of obedience to the command of the command. Everything was presented as if the faithful parts of Zeligovsky rushed into battle voluntarily in order not to allow the outbreak of the graves of their Polish ancestors "Lithuanians, Bolsheviks and Germans" (the Poles looked at independent Lithuania as a puppet regime created by the Germans). Located in 50 kilometers from Vilna, parts of Zeligovsky occupied the city of 9 in October 1920 of the year, and in October 12 Zeligovsky declared himself the Supreme ruler of the “state” created by him. In his “secret” dispatch to the command of the Polish army, Zeligovsky would call the capture of Vilna “the liberation of the Fatherland”. Pilsudski, who planned this roll to the east, officially dissociates himself from Zeligovsky’s actions and only three years later admits: “I myself organized the march of L. Zheligovsky. My order acted until the very end. ”

The creation of Middle Lithuania allowed Poland to use the seized territory as a strategic springboard. First, the Middle Lithuania, with its center in Vilna, separated Northern Lithuania (with its center in Kovno) from the remnants of the Belarusian lands, which were Russia, and served as a buffer between them. Secondly, Northern Lithuania had access to the Baltic coast, and Pilsudski’s next strategic step in the “expansion” of Poland to the east was to join the Vilnius ’Lithuanian covenant to Lithuania. It was also supposed to include Klaipeda (Memel) in the area of ​​Polish influence in order to have access to the sea. In the complex, these measures would give Poland the opportunity to take the territory of Prussia into a semiring and get a parapet on the way "from Russia to Europe", establishing the Polish political order from the Carpathians to the Baltic Sea.

The creation of Central Lithuania envisaged the redrawing of administrative and ethnic borders in this part of Europe: the inclusion in the second Polish state of Belarusian lands (parts of the Grodno and Vitebsk regions of modern Belarus), as well as parts of the Lithuanian territory that remained outside of the Middle Lithuania. The uprising in Klaipeda, which the Lithuanians raised in 1923, testifies to the tensions of the Polish-Lithuanian relations of that era, in order to prevent the French from transferring the Memel region to Poland. Memel was under the collective control of the Entente, and French troops were stationed in the city. At that time, Lithuania saw the main threat in Europe, and the Lithuanian rebels fought with the French and British units. The intervention of Poland as the most interested party in this conflict was impeded by the USSR, concentrating troops on the Polish border. This saved the Lithuanians from complete defeat, and yet Memel was incorporated into Lithuania.

Today in Poland reigns nostalgic cult of the Middle Lithuania. For the Poles, this is part of stories "Eastern Kresov", remained outside the Polish state. Lucian Zeligowski and Józef Piłsudski (both, by the way, natives of Lithuania) are honored as heroes and prominent Polish patriots. Warsaw is not going to repent to Lithuania for the campaign of General Zeligovsky. Repentance as a moral category is not for Poland at all. No matter how angry the Lithuanians are, apologies from the lips of Polish politicians will never be heard. For the Poles, to apologize for any episode in their history is to cause irreparable damage to the authority of the Polish state. Another thing is to continuously demand repentance from others, for example from Russians.

Vilnius and Warsaw, being NATO partners and subordinating their actions to the Euro-Atlantic course, in every way avoid giving a principled assessment of the bloody military episodes accompanying the formation of Middle Lithuania. Warsaw and Vilnius have to put up with each other on the basis of anti-Russian ideology, and the "inconvenient" episodes of the past both capitals are in a hurry to send to the archive forever, away from the public eye. It is better not to rock the boat of the official Polish-Lithuanian friendship, so as not to run into a cry from Brussels, which needs the Polish-Lithuanian bloc to “contain” Russia.

There is no end to this historical propaganda casus in Polish-Lithuanian relations. The controversy does not subside, however, mainly at the public level. Sometimes Vilnius becomes in a position, prohibiting the use of Polish at the official level in places of compact residence of people of Polish nationality, and the Lithuanian official body criticizes the historical legacy of the Commonwealth. Polish historians are not in debt, arguing that the federal union of Poland and Lithuania (under the leadership of Warsaw, of course) is the only path to the power of both states.

Periodically, Lithuanian patriotic inscriptions appear on the monument in Vilnius, where the heart of Yu. Pilsudski is buried, a clear sign that the Lithuanians had not forgotten how the Poles “liberated” their capital, and that until the truce between Lithuania and Poland in matters of history that so strongly gives away politics, still far away.

Ctrl Enter
Noticed oshЫbku Highlight text and press. Ctrl + Enter
We are
The internal springs of the Soviet-Polish warLithuania: a difficult path to and from Russia
5 comments
Information
Dear reader, to leave comments on the publication, you must to register.