Freedom Tymoshenko in exchange for European perspectives of Ukraine 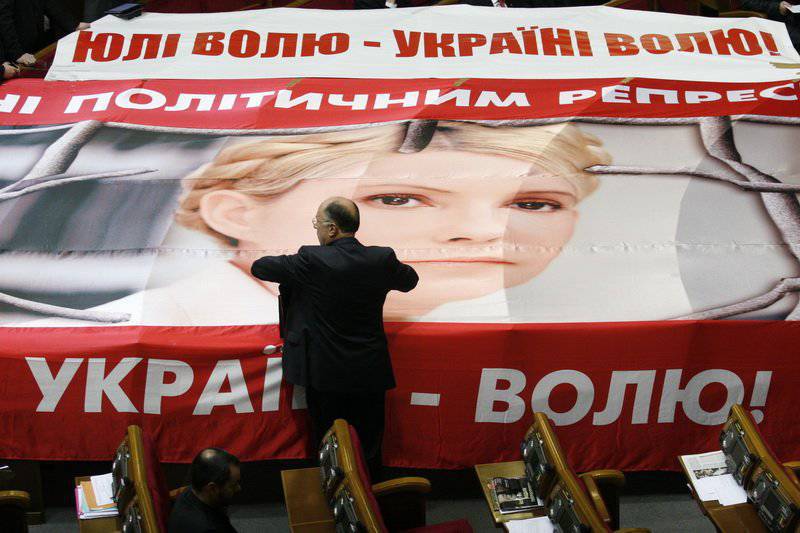 For a long time there have been battles between the authorities of Ukraine, the opposition and deputies of the European Parliament for the option of the future fate of Yulia Tymoshenko. 21 October this year. at the Council of the European Union it was decided to postpone the discussion of the question of signing an association agreement with Ukraine. The main reason for this decision is the unregulated Kiev issue of “electoral justice” in relation to Tymoshenko.

The companions of Tymoshenko have long been reconciled with the thought that full rehabilitation for the former prime minister will not be possible. They plan to receive for their leader a partial pardon, which will provide an opportunity to ensure Tymoshenko’s departure for treatment in Germany, and then allow the former prisoner to take part in political activities in Ukraine.

But the plans of the opposition does not suit the current government in Ukraine. President V. Yanukovych is ready to propose a different solution: the Verkhovna Rada is adopting a law that allows sending prisoners for treatment abroad, but after returning to their homeland, they will be required to serve the remainder of the term. With this proposal, V. Yanukovych makes Tymoshenko a “defect” and completely removes the most dangerous rival from the political arena of Ukraine in the future presidential election.

However, neither Tymoshenko herself, nor her opposition supporters agree with such conditions. And although there were several bills on this issue in the Ukrainian parliament, lawmakers are still unable to reach consensus on their texts: the opposition demands that Tymoshenko be allowed to engage in active political activity abroad, and the Regions are in favor of a significant restriction of freedom of action for the former Prime Minister .

As mentioned above, politicians from Strasbourg and Brussels take an active part in discussing the fate of Yulia Tymoshenko. So, one of the members of the European Parliament, Marek Sivets, in a personal blog told about his scenario for the release of Tymoshenko. He proposes to reduce the term of imprisonment from seven to three and a half years, and then, by a court decision, to release Lady Yu on parole, obliging the former prime minister to pay the amount of damage assigned. The head of the European Parliament, Elmar Brok, hastily “disowned” from such a proposal of his colleague, and Tymoshenko’s entourage was outraged by this option of deciding the fate of his leader.

According to a number of international analysts, the time for activating the decision to release the ex-prime minister is as good as possible: the Ukrainian authorities are striving to conclude an agreement with the European Union, and for this they need to deal with the future fate of Y. Tymoshenko, coordinating their decision with the Europeans. For European officials, participation in the discussion of this problem was an opportunity for career growth and the satisfaction of personal ambitions.

Kiev is constantly reminded that time is running out very quickly.

Today, in the decision of the fate of the former Prime Minister of Ukraine, a stage has come when all parties will provoke, bluff and deceive each other, which will finally confuse a difficult situation.

Foreign media also contributed to the stimulation of world public interest in this issue. So, recently one of the Polish editions, referring to persons close to Viktor Yanukovych, reported that Y. Tymoshenko would be released in November of this year. Political analysts believe that this step for the president of Ukraine is the most optimal in solving a difficult issue. By releasing Yulia Tymoshenko just before the summit, he will create the conditions for signing the long-awaited association agreement with the European Union, and will also be able to continue to unwind many new criminal cases already opened against the ex-prime minister. In the meantime, there will be investigations on these cases, Y. Tymoshenko closed the way to big politics. Consequently, she will not become a competitor of Yanukovych in the next presidential election.

However, the question now arises as to how the pardon of the former prime minister will be granted. Most likely, it will be as a gift "from the master's shoulder," which will lead to an improvement in the image of the current president himself. If the Verkhovna Rada adopts a law allowing to decriminalize the article on which Tymoshenko sits, it will help Yanukovych to arrange a pardon as a rule of law in the state.

The companions of Tymoshenko believe that, having received freedom even under such conditions, their leader will climb not on Golgotha, but on a pedestal. If she is forbidden to participate in higher politics, then no one can forbid her to engage in politics as a simple citizen of her country - for her own pleasure.

When analyzing the flow of information on this issue, one cannot get rid of the feeling that Tymoshenko’s exchange for Ukraine’s European prospects is just a game in which the one who finds the best move wins. And now the next step in the European game is for Viktor Yanukovych.

Ctrl Enter
Noticed oshЫbku Highlight text and press. Ctrl + Enter
We are
Results of the week. “So according to a dozen of you, citizens. For a dozen per capita "Geopolitical mosaic: Gorbachev explained that Ukraine had not been rebuilt, and that excursions go around the former residence of Yanukovych
61 comment
Information
Dear reader, to leave comments on the publication, you must to register.