American Thinker: What has barbarous Russia forgotten in civilized G8? 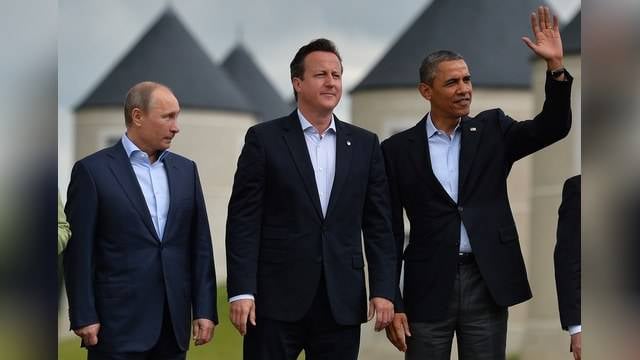 The whole world asks a question: what is Russia doing in the G8? There is not a single criterion that would justify the presence of Russia - this, for the most part, the country of the barbarians - in the organization of civilized nations, Kim Zigfeld writes in his article for the publication of American Thinker.


Australian human rights organization Walk Free Foundation recently published a ranking of world slavery, which includes the country's 162, placed on the list by the criterion of improving the situation with slavery. Perhaps this is the only rating, said Kim Zigfeld, whose members tend to take the lowest possible place. The United States, the leader of the G8, took a place in the 134 ranking, while Putin's Russia ranked 49. According to Walk Free, more than half a million people live in a state of slavery under Putin, and Russia has become the only member of the G-8 who made it to the first hundred of this rating, the journalist said.

Even in China there are fewer slaves than in Russia, so why is China not part of the G8, Kim Zigfeld asks a rhetorical question. If China is not accepted into this group due to its rejection of democratic values, then Russia should be excluded from the G8, as it is very hostile to these values.

But Russia looks like a barbaric state not only in relation to its slaves, Kim Zigfeld reports. The Times of London has recently published a ranking of the leading universities in the world, and Russian educational institutions have not even entered the top 200. MSU appeared on the 234-th position. Not surprisingly, seven out of ten top schools, according to The Times of London, are located in America. The three remaining in the top 10 schools are the pride of the UK.

At the same time, Italy, which is also part of the G8, occupies a place close to Russia in this ranking, which also says a lot, says Kim Zigfeld. According to her observations, the former Italian Prime Minister Silvio Berlusconi more than anyone else sympathized with the dictator Putin. The journalist presented Russia and Italy as two losers, spitting cheaters in the back with honors from the G8.

Kim Zigfeld quotes Mark Nakols, who teaches in Russia and “sees all these horrors with his own eyes”: “Trying to build a large, world-class university is more than simply unproductive. Russia can bring large-scale projects to completion, but the creation of a university requires coordination of actions, which is completely inappropriate for the Russian bureaucracy. ” Freedom and integrity, the two key ingredients needed to create truly great universities, are absent in Russian society, the journalist said.

Regarding corruption, Russia is again in last place among the G8 members. According to the international organization Transparency International, Russia ranked 133 in the corruption perception index. Canada was the least corrupt country (GNUMX-th), followed by Germany (9-th), Japan and the UK (13-e), USA (17-e), France (19-e) and Italy (22-e).

“By giving Russia a place in the G-8, the civilized world gives its permission to Putin for dictatorship. He gives Putin the opportunity to speak out against internal criticism, pointing out that democratic leaders are accepting him into their company. And this, in turn, allows Putin to apply even more stringent measures against those who disagree, ”Kim Zigfeld concludes his article.

RedPropaganda: Hey, Kim Zigfeld! We are planning to re-open the gulag for people like you. Do not want us? The best places in the institution. We will demonstrate our barbaric hospitality.

wallhousewart: Why is Russia in the G8? The answer is simple: keep your friends nearby, and your enemies even closer.

Deapster: A bloodthirsty, barbarous state ... At first I thought you were talking about Chicago.

Eightman: Better ask the question: “Why do we still need the G8?” After World War II, a lot of time passed, and the Soviet Union lost the Cold War. At present, the G8 at best is work for the public, and at worst, an excuse for conducting dangerous Keynesian experiments.

Alej: Russia for Siegfeld is a pain in the ass, read her previous "articles". "Barbarous state"? 95% of the total population of Russia lives in the west of the Urals, and the country's literacy rate reaches 96%. Compare these numbers with major American cities.

Shad_ow: Why is the US still in the G8? Without an approved budget, with unbearable debt, a criminal administration, our government turns our country into a banana republic. The NSA spying scandals spawned a huge distrust of the authorities. Why should the world respect the promises and suggestions of the liar Barak?

Ctrl Enter
Noticed oshЫbku Highlight text and press. Ctrl + Enter
We are
Global Firepower Index ranking: the world's most powerful armiesGeopolitical mosaic: American pilots dropped bombs on the eighth wonder of the world, and American Thinker journalist believes that tyrant Obama has no right to criticize Putin
175 comments
Information
Dear reader, to leave comments on the publication, you must to register.