Life Guards Finnish Regiment: the brave "Finns" in the service of the Russian Empire 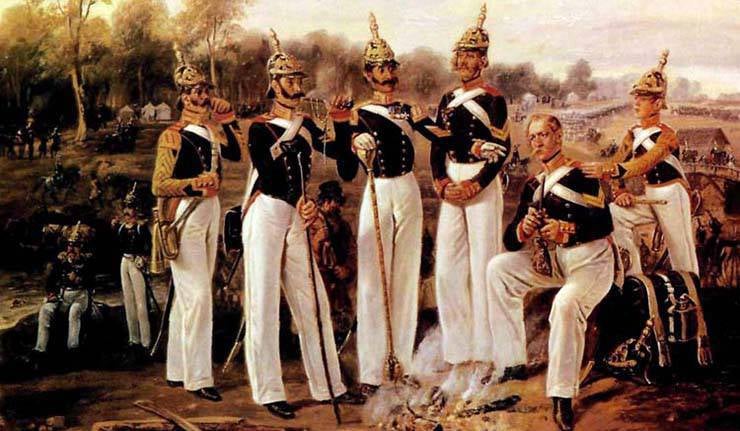 
The regiment got its name thanks to the first recruitment, which consisted of Finnish peasants.

The commanders of the Russian army highly appreciated the skills and courage of the soldiers of the Finnish regiment on the battlefield. By the number of St. George's crosses, the Finnish soldiers had no equal. The regiment was served by prominent figures of national culture, among whom were the conductor of the regimental orchestra Nikolay Titov, artist Pavel Fedotov and others.

The Day of St. Spyridon, revered by the Russian Orthodox Church 12 December, is considered the regimental feast of the Finns. The chapel of St. Spyridon is located in St. Petersburg. In the same place (near the building of the Officers' Assembly of the Finnish Regiment) there was a regimental library and a monument to the Grenadier Leonty Korennoy.

They composed songs about him, and Napoleon himself cited him as an example to his soldiers. The monument to the hero was created at the expense of officers of the Life Guards of the Finnish regiment, it depicted Leonty Roysenna in the battle of Leipzig.

An expert of the working group of the Ministry of Culture of the Russian Federation on issues of militaryhistorical reconstruction and assistance to the study and preservation of Russian military history Dmitry Klochkov:

“Leontiy Korennoy, as is known, was a soldier of the Finnish Regiment's Life Guards, who in the Battle of the Nations under Leipzig proved courage and set an example of a feat for the rest of the lower ranks. He was a man who was awarded the Cross of St. George, more precisely, a sign of a military order, for Borodino.

During the Battle of the Nations near Leipzig, he was able, with his entourage, to help the retreating soldiers and officers of his regiment. In particular, the staff officer and several officers were able to get over the stone wall, and he could cover them with a bayonet, a gun, received many wounds, was captured by the French.

He had more than 18 injuries, but the French, seeing his courage, valor, cured him and even then released him. When he came to the regiment again, he was already appointed not as an ordinary second-ensign, but as a standard-bearer. He was honored. "

Unfortunately, only a dilapidated pedestal with the inscription "To the Native Regiment" remained from the monument to Rootne. But the people's memory of the hero of the Life Guards Finnish Regiment is alive. The Finnish people praised the heroism and patriotism of their comrades in the regimental song:

"Finnish people, you have gained fame
Wherever you went into battle,
In the battles saw fun
Every one of you was a hero.
Steel breasts pave
The path to honor - glory led you,
Remember where the enemy we beat -
Here are your former affairs ... "

On the eve of the First World War, the Finnish regiment celebrated the solemn arrival of the French squadron with the President of the Republic of Poincaré. Nobody even thought that soon there would be practically nothing left of the Russian part, that almost all the valiant youth would die on the battlefield, defending Russia and its ally France.

26 July 1914, a part-time prayer service was served in the regiment and a ceremonial march took place. The lifeguard of the Finnish regiment set off towards Warsaw. The main task assigned to the guardsmen was to strike German troops in the direction of Warsaw-Poznan-Berlin, said Stanislav Malyshev, the chairman of the military history club "Soldiers of the Fatherland":

“At various times the regiments were loaded into Petersburg trains and in its suburbs. But the 7 of August, the entire second division, which included the regiment, came to the western province. Here the Finns had to make the first shots at the enemy — near the settlements of Grodzisk and Lovich. August 21 The Guards Corps was redeployed to the south-western front, to the Lublin area. On August 24, the Finnish regiment began the first major battle near the village of Gelchev. "
The personnel of the regiment was strong in both number and skill. In the unit there were a lot of non-commissioned officers who were put into service as ordinary ordinary fighters due to overflow. They died first.

The three-day battle near the village of Gelchev became the baptism of the Finnish regiment in the Great War. On August 25, the regiment commander set combat missions for the battalions. By the time the village was already shelled with artillery. On the night of 27 August 1914, the battalions moved forward, and at dawn the regiment with other parts of the division took part in the attack on the enemy. The Austrians were forced to withdraw.

The Life Guards Finnish Regiment played a significant role in the end of the Battle of Galicia - the first battle in the world with a huge number of troops. The regiment joined the Austro-Hungary and reached the Vistula River, where the so-called Ivangorod battles took place.

Despite the lack of projectiles and ammunition over a series of battles, as well as the lack of weapons and equipment, the regiment beat off the attacks of the enemy. In the Battle of Kovel, Captain Slashchev became famous for his feat. At the appointed hour for an attack, standing upright, crossing himself, with a naked saber in his hand, he led the fighters forward.

In the same battle, Slashchev went to the main trenches of the enemy, and when he stood between Major General Baron Klodt von Jurgensburg and the Germans, several soldiers ran out to cover Staff Captain Slashchev and prevent him from dying from the enemy’s hand.

In the winter of 1916-1917, the Finnish regiment was gathering strength for the upcoming spring offensive. 15 March 1917 (new style) was the abdication of the emperor Nicholas II. Outbreaks of rebellion were met in the regiment with a heavy feeling.

During the summer of 1917, the Finnish regiment participated in the so-called June offensive, breaking through the German positions, and fought under Chorostets. In these battles, the regiment lost its captain Petrovsky, lieutenants Melnitsky and Teglev, ensign Bakhmutov.

"All the regiments of the former Imperial army were officially abolished, but the most conscious and devoted officers and lower ranks in the fight against the Bolsheviks made their way to the Don. Alexander Moller, at that time already colonel, proceeded with the new formation of the regiment near Novocherkassk, to recreate it as part of the Don White Army.

The core of the regiment consisted of 27 personnel and wartime officers, which were joined by non-commissioned officers and privates, those who were able to arrive at the Don. Mobilization was carried out, and new people came to them. 13 June 1918, the regiment was revived. He took part in many campaigns of the Don Army, and after retreating in March, 1920 joined the Volunteer Army and joined the consolidated guards regiment. "

Ctrl Enter
Noticed oshЫbku Highlight text and press. Ctrl + Enter
We are
"For service and courage" "He was given for courage and loyalty to his native land."C George on the chest. Cavaliers of the Order of St. George on the fronts of the First World War
8 comments
Information
Dear reader, to leave comments on the publication, you must to register.